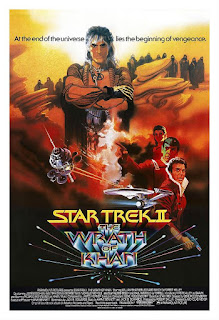 After the overblown, slow and tedious The Motion Picture, you’d have been forgiven for thinking that we had seen the Enterprise crew boldly go for the very last time. If there was going to be a sequel Paramount had very clear guidelines for what it wanted: more entertaining, exciting, don’t involve Gene Roddenberry and above all make it for a fraction of the price. I think it’s fair to say that the decision to bring producer Harve (“I could make three movies for the cost of that first one!”) Bennett and above all writer and director Nicholas Meyer on board, saved the franchise.

Neither Meyer or Bennett were familiar with the franchise in advance. But they did what those involved in the first film should have considered doing (looking at you Robert Wise!) – they went back and rewatched all the previous episodes and tried to work out exactly what people enjoyed about the show to begin with. And then tried to make a movie based around that. So first and foremost they decided they needed a villain – so after running through all the previous episodes they decided genetically-engineered superman Khan Noonien Singh, left abandoned on a planet with his followers after the episode Space Seed – was the best pick. Giving the film a simple “revenge” structure, it became a taught battle of minds and wills between Khan and the man he blames for all his problems – Admiral James T Kirk (William Shatner).

Star Trek II opens with an ageing Kirk, unsure of his place in the world while stuck in a desk job and scared about getting old. Running a cadet training voyage with his old crew, Kirk is called back into action after Starfleet loses touch with Federation scientists working on the Genesis device, a terraforming rocket that will help the Federation build new worlds and civilisations. The problems with Genesis are directly linked – without Kirk’s knowledge – with Khan’s (Ricardo Montalban) hijacking of the USS Reliant after brainwashing the ship’s captain Terrell (Paul Winfield) and his first officer Chekov (Walter Koenig). Khan blames Kirk for the disasters that have taken place on the planet he was marooned on – and is determined to exact revenge on Kirk no matter the cost.

Unlike the dry Motion Picture, Wrath of Khan builds is action around a compelling, emotionally charged, story that gives each character a clear and relatable motive for their actions. Building a film about revenge may not exactly be in Roddenberry’s ideal for the 23rd century: but by heck it makes for a much better film. Because, if nothing else, while we may struggle to understand what the hell V’Ger wanted in the first film, everyone understands the dangerous obsession of revenge. It helps that the film has an excellent villain – a scowling, unbalanced but still strangely honourable and decent Khan, played with a grandstanding relish by Montalban who is clearly having a whale of a time. Despite never sharing the screen (or even being on set at the same time) Montalban and Shatner go at the rivalry and its impact on both characters with a real intensity that makes for compelling viewing. 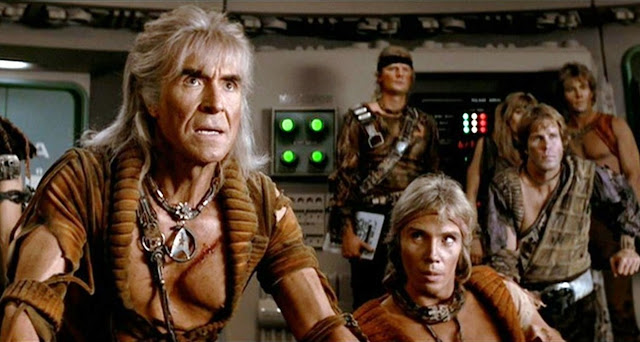 Meyer also tightened and refocused the entire franchise. Roddenberry may have struggled with the increasingly naval view of Starfleet in this film – it’s at least twice referred to explicitly as the military – but Meyer recognised that if the franchise was partly Hornblower Ii Space, then why not redesign the film with that in mind. The ship is run with naval precision, including yeoman whistling to signal shifts and orders, uniforms that have a stylish naval formality to them, a greater focus on the ship’s movements being described in strictly naval terms – even the photon torpedo bays are prepped by enlisted men in what Meyer called his “running out the guns” sequences. This makes the entire operation not only easier to relate to, but interesting and entertaining in its own right.

It also adds huge tension to the duel that develops between the Reliant and the Enterprise that plays out part naval battle and late on – when battle turns to the Mutara nebula where systems and sensors work only intermittedly – part classic submarine drama, with Meyer practically throwing in depth charges. The battle scenes are filmed with simplicity and economy – but because the personal clashes between Kirk and Khan are so compelling and involving, they absolutely drip with tension, as these two go through move and counter move.

Meyer’s film is lean, engrossing and thrilling, and superbly well directed. It goes from skilled set-piece to set-piece, and never for a moment overlooks character. Unlike the first film, we get the moments of Kirk-Spock-McCoy discussing key themes together so beloved from the series, while most of the main cast also get their moment in the sun, most especially Walter Koenig who, as a brainwashed Chekov, gets more to work with here than he got in the whole original series.

But this isn’t just an action adventure in space. Meyer’s literate and intelligent script has far more depth and thematic interest in it than the faux intellectualism of The Motion Picture. Taking as its starting point Kirk’s fear of on-setting age (the film opens with his 50th birthday, and McCoy’s gift of antique spectacles), it expands into an engrossing mediation of how we react to the impacts of our actions and lose-lose situations. Kirk has also to face the mortality of age and the impact of past actions – like his son (Merritt Butrick channelling Shatner’s impulsiveness) – coming back to bite him. All this while flying a ship of young cadets round – who need to shepherded into the risks of conflict. Khan meanwhile is confronted time and again with the damaging impact of his choices to follow revenge and obsession rather than settling for a winning hand.

Meyer gets his best work ever out of Shatner (allegedly after realising Shatner over committed to early takes, he made Shatner take multiple takes in order to focus his energy). This is a Kirk getting old, dealing with inner resentments and made to face up to the consequences of his actions – both with Khan and meeting the son he fathered. Shatner tackles all this with a world-weary resignation and touch of sadness that many felt were beyond him, while still making room for the fireworks that are his calling card (I suppose the famous “Khan!” was Meyer’s one major indulgence of Shatner’s exuberance). 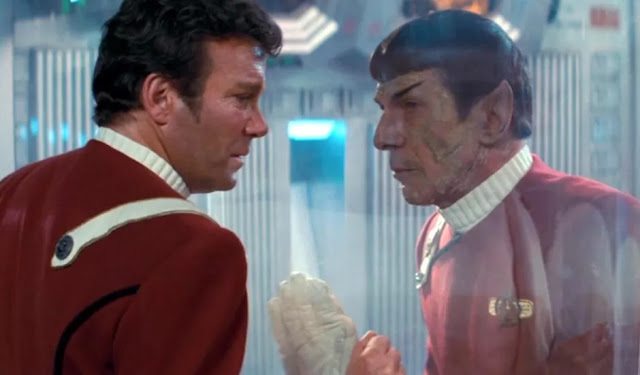 However the other element the film is well known for is of course it’s tragic ending – the sacrifice of Leonard Nimoy’s Spock. Lured back to the film, but not convinced about ever returning, Nimoy agreed to the final reel shocker (although he enjoyed making the film so much he willingly agreed to leave the door open for Spock’s resurrection). It gives the film an emotional heft that none of the others in the franchise has. For the first time, our heroes would not magically escape unharmed to fly off onto the next adventure. Just as the film started with the cadets learning that sacrifice and facing a lose-lose scenario is a part of command (a lesson Kirk cheated on in his day, and a situation he has never faced or understood, as the film teaches him), so the film ends on the same beat. The ship can escape – but only if Spock takes a fatal radiation dose to restart the engine.

Both Nimoy and Shatner play the heck out of these scenes, probably the most emotional in the franchise – a low-key but deeply affecting moments of two old friends sharing their last moments together. It’s this successful switch into showing the real cost and loss associated with adventures like this that cap the thematic depth Meyer bought to the film.

Star Trek II succeeds on every count. Meyer’s intelligent script quotes and riffs everything from CS Forrester to Dickens via Moby Dick, while giving both heroes and villains deep and rich character arcs. It’s grippingly filmed – you wouldn’t believe how much cheaper it was than the first film, as it looks ten-times better with not a penny gone to waste – and hugely exciting. It carries real emotional force, and it’s hugely benefited by a fantastic score by a young James Horner. Even now it’s still the high point of Star Trek on screen – and probably a highlight of the franchise as a whole.
Email ThisBlogThis!Share to TwitterShare to FacebookShare to Pinterest
Labels: DeForest Kelley, George Takei, Kirstie Alley, Leonard Nimoy, Nicholas Meyer, Paul Winfield, Ricardo Montalban, Star Trek, William Shatner