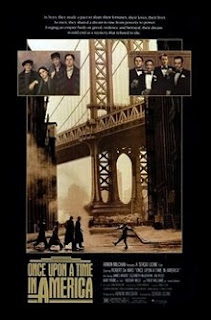 It had been thirteen years since Leone had made a film. During this time he turned down The Godfather in favour of his own dream of filming Harry Grey’s novel The Hoods. The final film, Once Upon a Time in America, seems destined to live in the shadow of The Godfather, from its settings and many of its themes through to its graphic design and cast. It’s a challenging, over-indulgent, sometimes difficult film that, never-the-less has its own sense of hypnotic power to it.

Told in a partly non-linear style, it opens with Noodles (Robert De Niro) a Jewish gangster on the run from thugs in 1930s New York days after the fall of prohibition. With his friends and his girl dead and his money stolen, Noodles flees the city – returning only in 1968 after a mysterious summons suggests his past is not as buried as he thought. Within this, the film weaves an intricate series of flashbacks that fill in the story of Noodles and his friend Max (James Woods) turning their teenage gang of hoodlums into an effective crew, muscling in on the money that can be made from prohibition. Carrying the story from 1918 all the way back to 1968, we discover why Noodles was on the run, what the money was, where it’s gone and who or what summoned him back to life.

Leone originally envisioned the film as a two-part epic: two films of three hours length. His original cut was almost ten hours long, cut down to six and then finally to just over four. This cut was released to critical acclaim at Cannes – but was still too long for the producers, concerned about making their money in America. To the fury of the cast (James Woods continues to be vocal about the butchering of the film), and the heartbreak of Leone, the film was cut again to just over 2 hours before its release in the States – a move that rendered it nearly incomprehensible and led to reviews that labelled it one of the worst of the year. Only with the much late release of the European cut (and work continues to restore something closer to Leone’s six hour cut) did the film find acclaim.

But you can see why the producers worried. Leone was never a director who felt the need to get where he was going quickly. As his films became ever more dominated by his love for artful compositions, meditative longeurs and drawing the tension out for as long as possible, so their running times ballooned. Leone matched this with a yearning to tell a story that was to be nothing less than to be about “America” – or at least, give a symbolic weight and depth to the Americana he loved. The film is overflowing with the feel of Old Hollywood gangster films and classic imagery of the immigrant experience in Manhattan. It’s like a brilliant coffee-table album bought to life and covered with blood. 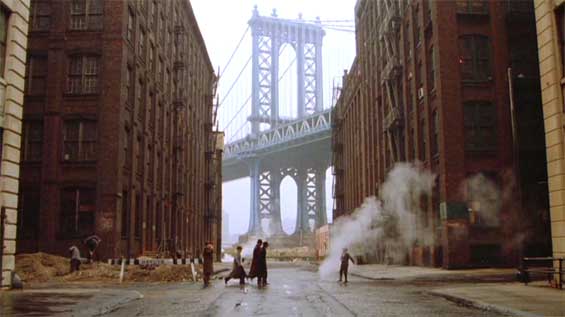 So Once Upon a Time in America is slow, lethargic even, film that takes its time to build up a picture of an immigrant community drawn together through bonds of culture and shared past that are nearly impossible to express – but fractured by the greed and capitalism of the American Dream, temptation to make an even bigger killing leading to old loyalties being sacrificed. Leone juggles some big ideas here, and if the film never quite comes to grips with any of them as it charts the fractured relationship of Max and Noodles, from brothers-in-arms to Max’s ambition, pride and own private frustrations leading to betrayal it’s never less than strangely engrossing.

In many ways this is a hugely indulgent film, but it is also remarkable for how restrained and elegiac it is. The razzamatazz of some of Leone’s Westerns are mixing entirely in a film here that takes a golden age romantic view of the past – and its lost opportunities and loyalties – and is particularly fascinated with the coming-of-age of young men. The film is nothing less than an old man making a ruminative journey through the past (both Leone and Noodles in his memories), looking back at a life time of bad choices and lost chances. It all makes for one of cinema’s greatest mood pieces ever, with faultless period reconstruction, but also a piece that for all its focus on personal lives at cornerstones of histories, makes its characters seem strangely impersonal.

Part of that lies in Leone’s clear love for the film’s long second act (nearly a third of its runtime), which charts the young Jewish hoodlums teenage lives in 1918 New York – their meeting, the first scores, their rivalries and clashes with other gangs, their loss of virginity. For all its overextended backstory, the section of the film hums with love and an elegiac romance. It’s the richest part of the film. There is a beauty in beats of the watching the boys encounter everything from first crime to first love – and easy as it is to mock a good 3-4 minutes watching one of them eat a cake that was intended as an offer in exchange for a first sexual experience with the local floozy, moments like that have an innocence and a beauty to them that Leone really captures. 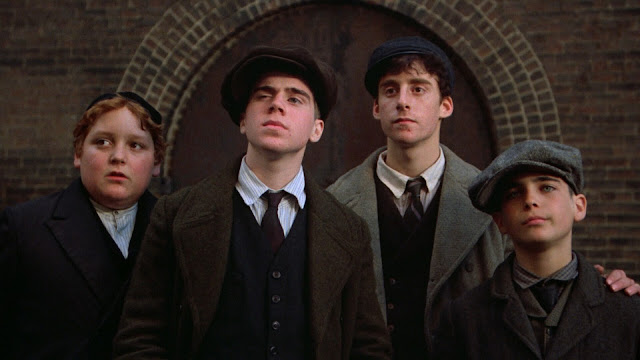 It’s a shame that it’s the back-end of the film that suffers – and its plot and narrative drive. It feels like Leone fought to keep the beauty of this early section and sacrificed drive and narrative later in the film. The fracturing of the relationship between Max and Noodles is less clear, and their adult characters never quite come into focus. Perhaps there isn’t quite room for actors in the long sequences of wordless silence and atmosphere, punctuated by bursts of shocking violence, in Leone’s world. Certainly the cut doesn’t help, with most of the supporting cast (Joe Pesci, Treat Williams, Burt Young, Danny Aiello) reduced to little more than one scene each, their storylines – particularly a crucial Teamsters plot – barely making any sense.

Max’s growing distance from Noodles is perhaps rooted in everything from his ambition being frustrated by Noodles small-time viewpoints, perhaps even in suggestions of a frustrated homosexual love for the defiantly straight Noodles. James Woods does very well to piece to together a suggestion of deep psychological unease and confusion in a character who remains unknowable, a man to whom loyalty is everything until it isn’t.

As Noodles Robert De Niro anchors the film with one of his quietest, most reflective performances. Noodles is a deeply flawed, low-key, humble character who carries in him a capacity for self-destructive and vicious violence. Leone’s film suggests Noodles is perhaps troubled by feelings and longings he can’t begin to understand or appreciate. He is a romantic character, deeply infatuated with both Max and his childhood sweetheart Deborah, but unable to express or communicate his feelings until it is far too late, a man traumatised by emotional connection.

Not that this excuses Noodles for his actions, particularly towards women. If there is one troubling aspect of the film it is its attitude towards women. There are two prominent women in the film, both of whom are raped. One of them, Carol, is a shrewish temptress, who deliberately provokes Noodles to rape her and is then shown enjoying it. The second rape, this time of Deborah, comes from Noodles after a romantic date where he has finally done everything right. While Leone shoots the scene with an almost unwatchable grimness – Elizabeth McGovern’s screams and distress make for very hard viewing – the film still asks us to feel not only for her pain, but also (perhaps more so) Noodles regret. Further when they encounter each other late in life, Deborah matches him in sadness at chances lost – an unlikely reaction you feel for someone who has suffered as traumatic experience as she has.

But then to Leone perhaps this is part of the corruption of America – or rather the vileness of gangsters. The gangsters are a grotesque bunch in this film, killing without compunction, torturing, stealing, using violence as second nature. Loyalty is barely skin deep and arrogance abounds. There is no romantic sense of family behind it all – perhaps the thing Leone rejected most from The Godfather – just a series of people on the make and on the take.

But for all its faults and over extended length the film is increasingly hypnotic and engrossing, Leone’s understanding of mood being near faultless. While the ideas are perhaps not quite pulled into sharp focus in the film – and leave the audience having to do a lot of supposition – it still works over time. And the film has so many astonishing merits – from its awe-inspiring shooting and production to the sublime score from Ennio Morricone that gives the film even more of a poetic depth – it more than merits its existence.

And of course there is the cheeky sense Leone throws in that some – or indeed all – of what we are seeing may not even have happened. The film opens and closes with Noodles in an opium den, stoned out of his mind, in the 1930s. In the opening he lies there, haunted by the sound of a ringing phone (the memory of the phone call he made betraying Max), and we see him arrive at the film’s end taking his first puff and lying back with a grin. Is the film’s off-kilter 1968 even real? Or just an opium den dream? Is the past – and the film’s disjointed narrative flying back and forth – just a stoned man lost in his own fantasies? Who knows? What we do know is that Leone’s indulgent epic is a flawed but genuine masterpiece – and the opium fantasy angle may just be the perfect cover for the fact more than half the film is on the cutting room floor of history.
Email ThisBlogThis!Share to TwitterShare to FacebookShare to Pinterest
Labels: Burt Young, Danny Aiello, Elizabeth McGovern, Gangster films, James Woods, Jennifer Connelly, Joe Pesci, Richard Bright, Robert De Niro, Sergio Leone, Treat Williams, Tuesday Weld, William Forsythe