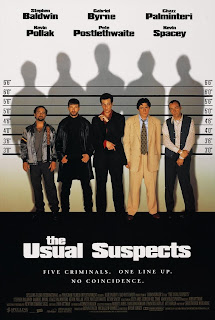 SPOILERS: If you have been living in a cave since 1995, don't read on as I discuss the twist at great length...
“Convince me”. That’s what Customs Agent Dave Kujan (Chazz Palminteri) says as he begins his interrogation of limping, low-time crook “Verbal” Kint (Kevin Spacey). That’s certainly what Kint does – and it’s what the whole film is aiming to do in this, the most famous confidence trick in movies. The Usual Suspects is one of those once-in-a-blue-moon films where everything comes together perfectly. It’s also a sleight-of-hand movie that remains hugely engaging and entertaining even when (as surely most people now do!) you know exactly what the magician has up his sleeve. Its solid gold entertainment factor even survives today, despite the slightly queasy presence of both Kevin Spacey and Bryan Singer in its credits.

Told in flashback, the film follows the coming together of a bunch of regular criminals, pulled in for a line-up and deciding to team up. Along with Verbal, the others include McManus (Stephen Baldwin), Fenster (Benecio del Toro), Hockney (Kevin Pollak) and ex-cop turned criminal Dean Keaton (Gabriel Byrne). After a successful series of heists, the gang are conscripted by suspicious lawyer Kobayashi (Pete Postlethwaite) to take on a dangerous hijacking job for shadowy – possibly legendary – master criminal Keyser Soze, the bogeyman of the criminal classes. We know the job will go wrong – after all Verbal is banged up telling the whole story, the only survivor of the job – but how? And who is the shadowy Soze – or is he even real at all?

The Usual Suspects takes what you know about movies and then works double time to use it against you. With a structure inspired by classic noir crime films from the 1940s – the whole operation has a touch of The Asphalt Jungle while the interrogation has more than a hint of Double Indemnity – mixed in with a lot of Rashomon, it’s a movie that has you primed so much for a reveal and a twist that it skilfully misdirects you into expecting the wrong thing. Because how could you guess that perhaps the whole movie is a spun-out-of-the-moment invention by Verbal, and that possibly almost nothing we see during the course of its run time even happened.

But how can we guess? From the very first scenes with Kujan and Verbal, Kujan is shot dominating the frame, always taller, always filling the screen. Verbal is sitting, meek, trapped by the frame, the camera frequently looking down at him. Every shot subliminally tells us that he is weak. The story has to be dragged out of him, with the investigation outside of the room forcing Verbal to expand on issues he doesn’t want to touch on. Like Kujan we invest in what we are finding out, because it looks like Verbal doesn’t want to tell it to us. That’s how they get you.

Because Verbal, in his story, is sprinkling in just the twist that Dave (and the audience) is probably expecting – that Gabriel Byrne’s Dean Keaton, the guy who claimed to have gone good, who just wanted out, was bad the whole time and was the criminal mastermind this whole time. Christopher McQuarrie’s ingenious script primes us for this: Dave Kujan is casting doubt on Keaton’s “death” right from the start, and as the audience surrogate figure we want to be as smart as he is. So what does it matter that we ”see” Keaton shot in the opening sequence of the film? Surely that was an illusion, and we’re as clever as Kujan in seeing through it.

The film even gives us a brilliantly assembled “reveal” series of edited flashbacks, in which every small moment and hint that has existed in the film is replayed for us (John Ottman’s editing is flawless here – and he should also have credit for composing the film’s hauntingly classical score) to convince us, beyond a shadow of a doubt that, yup, poor simple Verbal was taken in all the time by dastardly Keaton, the guy who looks like a film star. Only of course it’s bollocks. That charred corpse that Singer jump cuts to at the start of the film as police investigate the boat massacre is indeed Keaton. And the clever twist we thought we were working out, turns out to be a mass distraction laid out for us by Verbal and the film.

So we get a second brilliantly edited reveal sequence as it hits Kujan while he studies that most famous notice board in film, that everything he thought he had worked out had been spun out of hints and clues off the board – from asides and anecdotes to entire locations and characters. And Kevin Spacey limps and then walks away, shrugging off the skin of timid, weak Verbal to transform into the chillingly amoral Soze. It’s a trick that worked especially well when Spacey was an almost unknown actor at the time (today it’s less of a surprise to find out that Spacey could be a creep). There is possibly no better reveal in Hollywood.

But the film continues to entertain even when you know it because Singer’s film is stuffed with richly layered characters, scintillating scenes and some rich and spicy dialogue from McQuarrie. It’s a brilliant combination and provides every scene with a clear and electric dynamism that makes it impossible to tear your eyes away. There are some truly striking scenes – not least the iconic line-up scene – and the film carries an improvisational energy (that line-up scene is a magic use of outtakes, as the actors couldn’t keep a straight face during the sequence).

Part of the magic of it comes from the brilliant clash of a group of vastly different actors bouncing off each other: the self-consciously method Baldwin, the edgy energy of Pollack, the chilly technique of Spacey and the classically trained professionalism of Byrne, who pulls off with aplomb a difficult job of playing a decoy protagonist and antagonist in one. And that’s not mentioning the wild card of Del Toro who, working out his character was a one-note plot device, throws in an eccentric chic and impenetrable mumbling accent that is part affectation (the sort of thing that made the actor more trying later in his career) and part jaw-dropping show of confidence. And backing them up is a collection of actors as eccentric as Palminteri channelling Law and Order with a smile and Postlethwaite as a sinister limey lawyer with an accent that sounds like it hails from the Raj.

Singer’s direction is flawlessly confident, creating a rich tapestry that you could lazily call Tarantinoesque, but actually reminds you of John Huston in its carefully framed mise-en-scene. It’s a very classical movie in its way, that loves clever wipes, slow build ups, brilliantly edited and surprisingly low key in much of its framing and shooting. Everything is perfectly placed to help build up the illusion. Singer never touched these heights of confidence and control again. It’s also superbly edited throughout by John Ottman, each beat landing perfectly, each transition perfectly judged. It wouldn’t seem out of pace to see Cagney playing Kint (with Bogart surely as Keaton).

The devilish trickiness of the plot is kept largely under wraps until late on – Soze isn’t even mentioned until nearly halfway through the film – and the film’s confident misdirection suggests this might just be the gang aiming too high and getting burned rather than a shadowy mastermind manipulating it all. It’s a brilliantly judged change of pace, and all part of the impish delight of the film. It’s a clever game, but has more than enough force and invention in its story telling to keep you gripped time and time again. McQuarrie and Spacey won Oscars – and the film hinges so much on Spacey’s ability to both tell an anecdote and also not push his acting lame – and the film lives on forever in the memory as one of the finest twists. But it does so because the twist grows so organically from the film, and the film’s delight in tricking you is completely infectious.
Email ThisBlogThis!Share to TwitterShare to FacebookShare to Pinterest
Labels: Benecio del Toro, Bryan Singer, Chazz Palminteri, Crime drama, Dan Hedaya, Gabriel Byrne, Giancarlo Esposito, Kevin Pollak, Kevin Spacey, Pete Postlethwaite, Stephen Baldwin, Thrillers