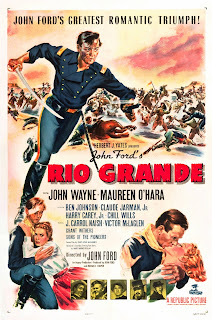 John Ford’s next project was meant to be The Quiet Man, his Ireland-set passion project. However the studio, Republic Pictures, were not convinced the expensive picture could ever be a hit (it later became one of their biggest hits and only Best Picture nominee). So they told Ford he could make it on condition that he, and his proposed stars Wayne and O’Hara, first made a good old-fashioned Western. Because they sure as hell knew they could sell that. So Ford turned out the third and final picture in his “Cavalry” trilogy, three interconnected films (the others being Fort Apache and She Wore a Yellow Ribbon) with loosely connected themes and overlapping character names.

Lt Colonel Kirby Yorke (John Wayne) is posted on the Texan frontier, defending the settlers against Apache attacks. When Yorke’s son Jefferson (Claude Jarmon Jnr) – who Yorke wasn’t seen in almost eighteen years – washes out of West Point, he volunteers to join Yorke’s regiment as an ordinary Trooper.  This leads to the arrival of his mother – and Yorke’s estranged wife – Kathleen (Maureen O’Hara arriving at the Fort, eager to get her son out of an enlisted life she feels isn’t right for him. But Yorke is determined there will be no special treatment for his son, never mind how dangerous are starting to get with the Apaches.

Rio Grande is a professionally assembled, classic Ford western that hits all the marks you could expect in terms of action, excitement and that romantic version of the West that you might expect from Ford. But it’s perhaps so professionally assembled it still feels like one for the money at times – it’s a collection of all you might expect from a Ford classic, so much so it doesn’t feel like it offers much new among the director’s other works.

It’s most interesting parts revolve around John Wayne’s complex performance as a man who has buried his emotions beneath a cover of professionalism. Yorke is now martinet, but he’s a man who has put duty above his personal relations. It’s easy to forget that in many of his iconic roles Wayne was often the veteran, and here is man nearing retirement, loaded down with regrets and secretly crying out for a chance at reconciliation. Wayne’s performance is heartfelt and tinged with sadness, the sort of man who looks at his son from a distance as he performs dangerous horse riding stunts, but then backs away into the shadows, anxious that his fatherly concern remains unseen. It’s a quiet, lonely and sad performance from Wayne, a reminder of what a soulful actor he could be. 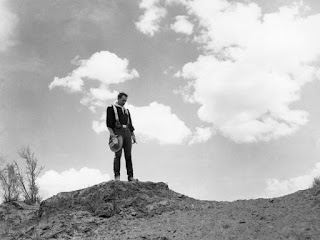 It also helps that he has wonderful chemistry with Maureen O’Hara, equally wonderful as his wife. A caring and loving woman, O’Hara’s Kathleen is also determined and independent, sure of her own mind and with no compunction about standing her ground against her husband. The two of them make a wonderful pair, two people who fear they have turned their backs on happiness for duty but secretly desperate for reconciliation. That desire certainly drips from Wayne, whose sad eyes beneath his drooping moustache seem to be constantly searching for grasping something from his life – and Ford certainly knew how to shoot this American icon with angles that made him appear like a mournful monument.

The actual plot of the film outside of this isn’t really that strong. Any shade or depth is removed from the Apaches who are faceless, ruthless killers who move like a swarm and spend the nights dancing and drinking after a victory. Even at the time there were feelings that the film was uncomfortably slanted in its view of the Native Americans. The actual story of the battle against the Apache meanders across the screen, with discussions of crossing the Rio Grande to do battle with them largely forgotten in a final act kidnap plotline that serves as the film’s action set piece.

Honestly, most of the plot outside of whether Wayne, O’Hara and son (played with an earnest honesty by Claude Jarmon Jnr) pretty much is by the numbers stuff. There are a host of songs and musical interjections from contemporary Western group Sons of the Pioneers. Ford made a virtue of the studio’s decision to include the band – apparently they loved being in the film and led a number of impromptu sing-alongs during the late night cast sessions, which basically led to Ford putting more of them in the film. The songs do add a wistful, whimsical air to the film which actually works rather well and mirrors nicely the personal drama of a family unit which duty is keeping apart.

The action when it kicks in is enjoyable, even if Ford relies a little too heavily on over cranked cameras to adjust the speed of various falls and horse riding stunts – the sped up effect actually often makes the whole thing look a little too reminiscent at times of keystone kops silent film. The best stunt sequence is done instead in real time, as Johnson, Carey Jnr and Jarmon Jnr take it in turns to “Roman Ride” two horses at a time around a course. Johnson and Carey – skilled horsemen – spent weeks training, the effect was so good that Ford suggested Jarmon have a go.

The cast is rounded out by some solid work from Ford regulars. McLaglen is good value as a decent Sergeant, one of those comic Irish types that Ford had such fondness for. Johnson is very good as a trooper on the run from the law who can’t resist coming back to the do the right thing. But the film belongs to Wayne and O’Hara, a couple looking to seize a last chance at happiness. Rio Grande may be one for the money, but it’s still got a touch of that Ford magic.
Email ThisBlogThis!Share to TwitterShare to FacebookShare to Pinterest
Labels: Ben Johnson, Chill Wills, Claude Jarmon Jnr, Harry Carey Jnr, J. Carrol Naish, John Ford, John Wayne, Maureen O'Hara, Victor McLaglen, Westerns