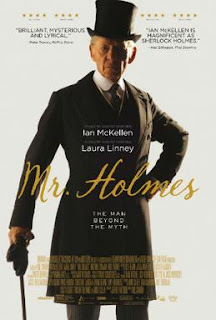 It’s 1946 and over 35 years since Sherlock Holmes (Ian McKellen) last investigated a case. Living in retirement with his bees in Devon, with his housekeeper Mrs Munro (Laura Linney) and her inquisitive son Roger (Milo Parker), 93-year-old Holmes’ final “case” is to try and combat the deterioration of his own mental faculties. This focuses on his attempts to remember the details of his final case, investigating the wife (Hattie Morahan) of a client, a case where he knows something went terribly wrong, but cannot recall the exact details.

Condon’s film is a quiet, gentle piece which primarily becomes a character study of the Great Detective, trying to locate the man inside the thinking machine. This is a Holmes unlike any other, haunted by past mistakes and scared of losing the intellectual abilities that have been his principal purpose. Condon’s film also makes clear that much of what we know about Holmes was a cheeky “embellishment” by Watson in his stories – from the pipe and deerstalker to the address of 221B. This is a Holmes who failed all his life to form personal connections, and found this problem magnified by becoming a real-life fictional character, a person who knows no-one but is known by everyone.

This fascinating re-evaluation of Holmes is helped by Ian McKellen’s superb performance (in his second collaboration with Condon after Gods and Monsters). McKellen’s ability to convey the intellectual sharpness of Holmes is matched by his vulnerability and fragility as he feels those same powers begin to fail. This is a Holmes who can still sharply deduce where someone has been from a quick analysis, but needs to write Roger’s name on his cuff to help him remember whom he is talking to. McKellen’s performance slowly reveals the longing for emotional connection and his own regrets at the isolation that has dominated his own life.

The expressiveness of Ian McKellen’s eyes comes into play here, both their capacity for joy – and this is a Holmes who takes an intense pleasure in his own acuity – and the way McKellen is able to allow these eyes to glaze over with forgetfulness and flashes of senility. He also forms a wonderful bond with Milo Parker (very good, genuine and real) as Roger, the two of them forming an odd couple relationship that also gives Holmes a beginning of an understanding of what he has missed from a life without family and friends.

Alongside this fascinating character study, the actual storyline is fairly tame – but then that’s hardly the point. The modern day plotline takes in physical and mental decline, isolation, fracturing family bonds and post-war Japan (where Holmes travels in search of “Prickly ash” a plant he hopes will help to counteract his mental decline). But it’s really a quiet framework to change this Holmes into a man who sees the world only in terms of logic and puzzles, and must learn to see the humanity and emotions that underlie people’s actions. It’s a Holmes who must learn to appreciate feelings, to express them and to tell “white lies” to save people from pain.

It’s no surprise that the past sequences – where a spry McKellen also plays Holmes in his late 50s – also revolve around this. The investigation cheekily features spiritualism (the pseudo-science that obsessed Conan Doyle in his later days) but the real point is Holmes failing to understand the pain and loss that underlie the desire to believe in the possibility of life after death – that loss is a traumatic event that cannot be hand-waved away with a presentation of facts, but a has a real lasting impact on people. Hattie Morahan captures this wonderfully, in a quietly emotional performance as a grieving mother.

The final resolution of this I found slightly less satisfying – perhaps because I thought of actual “canon” stories that showed Holmes expressing far more emotional intelligence than this film gives him the credit for understanding here (e.g. The Yellow Face). I’m also not sure if this failure would really have left any Holmes punishing himself with 35 years of isolation with bees. But it fits with the film’s concept of a Holmes who finds himself pained by loneliness.

This loneliness is hammered home throughout. Mycroft, Hudson and Watson are long dead. Watson himself is implied to be a man who never understood Holmes, that the “fictionalised” Holmes became more real to him than the flesh-and-blood man. That on Watson’s part the friendship became about the stories, with Holmes always triumphant, rather than reflecting who he was. Holmes finds this disconnection between his inner self and the world’s perception hammered home at every turn – at one point the film shows him watching a Rathbone-esque film (where he is played by Nicholas Rowe, the actor from Young Sherlock Holmes), where the case that haunts him plays out with a traditional ease. Completing this disconnection, Watson remains unseen in the film: a stranger whom Holmes was tied to forever.

All this makes for a thought-provoking film, with a delightful performance from McKellen making a truly unique and original screen Holmes. There are a host of fabulous supporting performances – Laura Linney does fine work as his insecure, lonely housekeeper who feels she is losing her son to the detective – and the film is a gloriously entertaining Sunday afternoon treat, which will make you think again about a man whom the whole world knows, but who may not know himself.
Email ThisBlogThis!Share to TwitterShare to FacebookShare to Pinterest
Labels: Bill Condon, Frances de la Tour, Hattie Morahan, Hiroyuki Sanada, Ian McKellen, Laura Linney, Phil Davis, Roger Allam, Sherlock Holmes