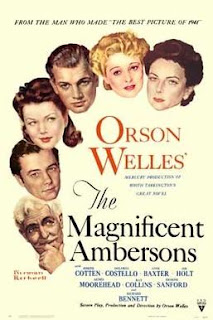 In early 1940s, Orson Welles was given the sort of contract by RKO directors normally only dream of. The freedom to write, direct and star in films of his choice and, most of all, the power of “Final Cut” – the dream of all his contemporaries. All this for a 25-year-old who had never made a film. It was unheard of – and it was never heard of again. The reaction to Citizen Kane had been full of praise from the critics but that hadn’t saved it from box office disappointment – nor the savages of the Hearst press or the jealousy of his peers. The chickens would well and truly come home to roost on The Magnificent Ambersons, the second picture in Welles’ deal.

The film itself is an adaptation of Booth Tarkington’s Pulitzer prize-winning novel. The Ambersons are a powerful and rich Midwestern family at the turn of the century – but the film charts their decline and fall as the modern age (represented by the motor car) slowly leads their world of genteel wealth and entitlement to a close. It’s a particularly challenging concept for the youngest member of the clan, George Amberson Minafer (Tim Holt) to come to term with, the spoilt young son of Isabel (Dolores Costello), who has grown up expecting his every whim to be met without question. His hostility focuses on Eugene Morgan (Joseph Cotton), his mother’s rejected suitor (now renewing his interest with her widowhood) and inventor who has patented a new form of motorcar. Things are complicated by George’s own love for Eugene’s daughter Lucy (Anne Baxter), a young woman who expects George to want more from life than just to live off his family’s wealth.

It’s impossible to discuss The Magnificent Ambersons without mentioning its status as perhaps the greatest “lost film” ever. Welles’ original cut of the film was a little over two hours long. He completed the cut and then flew to Brazil to begin collecting footage for his next project, It’s All True a part-documentary, part-fiction film (which in the end was abandoned). While he was out of the country, the film was roundly rubbished at a test screening. RKO panicked and demanded cuts. Welles had foolishly surrounded his right to final cut for the film and sent back a list of suggested changes (some have argued the list was deliberately bad to force the studio to make no changes), but refused to fly back to supervise things. 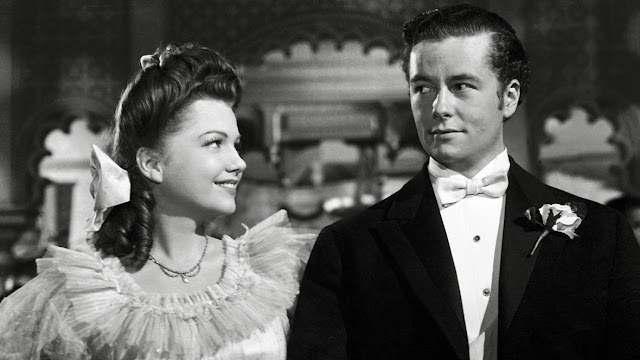 So his editor Robert Wise (later a two-time Academy award winning director) cut the film down to just over an hour and twenty minutes. Cotton and Moorehead were corralled into filming some new scenes to hurriedly wrap the story up and give it the studio mandated “happy ending”. Welles wasn’t happy, but still wouldn’t come back to fight his corner. His notes were destroyed and eventually the remaining negative of the deleted scenes were burnt. So the truncated shadow is all we have.

I call it a shadow, because that is what the film feels like – an afterimage of a true masterpiece, like a dream you can almost completely remember. In some ways it’s an even more confident and controlled piece of film-making than Kane, a wonderfully assured and graceful piece of film-making that mixes luscious long-takes with a triumph of techniques and little details (both of performance and technical work). Welles captures this all within a triumphantly impressive set, an elephantine house of at least three stories with a winding grand staircase, that allows him to film from different, heights and angles as well as indulge a series of graceful tracking shots that all proceed and accompany the actors through the house.
Welles matches this with a storyline that captures a sense of a country in a state of change – a tipping point of modern America as the Henry Jamesian Old Americans, with their wealth and inherited English-class system, gave way to industrialist new money. These two worlds sit awkwardly against each other, constantly compared and contrasted – Eugene’s car factory is a noisy, piston filled Ford-ist church, a world away from the formal gentility of the Amberson home.

Welles also captures this in a series of wonderful vignettes, not least an early scene featuring Morgan driving Isabel and her siblings through the snow bound countryside in his prototype motor car, at first passed by an arrogant George with Lucy in a horse and sleigh, then having to bail George out when the sleigh turns leaving him and Lucy stranded. George is reduced to pushing the car to getting it started – getting a face full of fumes for good measure – a humiliation that hardens his stance against the modern world (and Eugene) all the more. 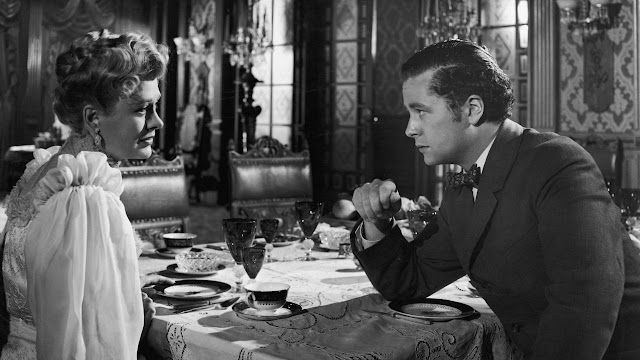 Because for George – superbly played with a fragile ego and utter lack of self-awareness by a preeningly weak Tim Holt – the world has a certain order that places Ambersons at the top and the rest of the world at various levels on the way down. And anything that might threaten to change that is rejected at all costs. George expects the world to march to his tune without him putting in the faintest effort – and when it doesn’t, his whole life is a desperate raging of petty attempts to assert his control.

This focuses above all on exerting a bullying moral force on his mother, a woman who loves her son but also wants to explore the romantic feelings she has for Eugene (and by extension her understanding that the world is changing). George makes this choice stark – him or Eugene – a choice no mother can be expected to make. Dolores Costello is superb as a woman who has spent her life shutting her eyes to her son’s selfish nature until it’s too late to change, who sacrifices her own desires for the good of her family.

The whole film is a feast of sublime acting, a reminder of how Welles could get the best out of actors (all regular collaborators of his). Joseph Cotton’s earnestness is perfect for the upright and decent Eugene, too proud to let his resentment and anger show. Ray Collins is wonderfully sweet and endearing as Jack, George’s generous and open-minded uncle. Anne Baxter has a radiant honesty that hides a determined spine of moral certainty as Eugene’s daughter Lucy. Perhaps finest of all is Agnes Moorehead (Oscar nominated) as Aunt Fanny, George’s spinster aunt, who has worn a mask of contentment over her own frustrations and resentments for so long she only slowly begins to work out what she actually feels about anything at all. Moorehead’s performance walks a brilliant line between careful underplaying and explosive dynamics – she has at least three striking emotional breakdown scenes of such brittle honesty that it’s enough to move you to tears. 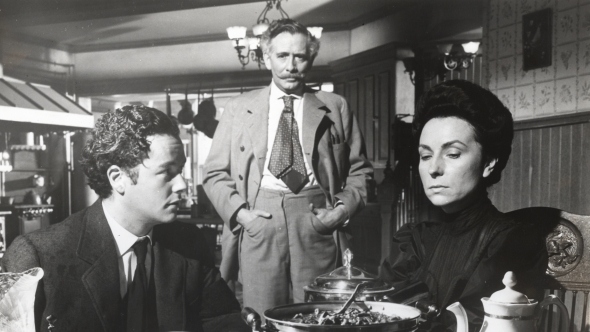 All of this comes together into a superb package of sublime film-making and intelligent story telling. The problem is it’s too short. The later scenes really bear the brunt, with Wise’s cutting trimming much of the connecting meat between the key scenes. Events towards the end seem to happen with no build up – characters suddenly die, fortunes are swiftly lost, years disappear from one scene to the next. As the film accelerates through its final half hour, narratively it begins to make less and less sense. Then the studio caps on a functionally filmed happy ending (Wise does at least ape Welles’ tracking shot techniques – he was a very capable director) which rings utterly untrue with the sadly elegiac story we’ve been watching (superbly narrated by the way by Welles).

It makes The Magnificent Ambersons a wonderful, incomplete masterpiece. It’s the filmic equivalent to those parts cut off from The Night Watch or Ucello’s Battle of San Romano. What we are left with is still awe inspiring. But it could have been even more.
Email ThisBlogThis!Share to TwitterShare to FacebookShare to Pinterest
Labels: Agnes Moorehead, Anne Baxter, Dolores Costello, Erskine Sanford, Joseph Cotton, Literary adaptations, Orson Welles, Ray Collins, Richard Bennett, Tim Holt