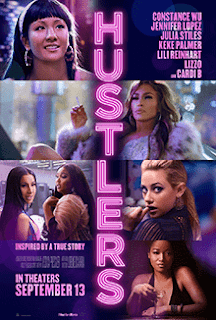 Greed. To many people, it’s what powers society. Those at the top believe anything can be bought, that they can have anything and everything they want simply because they have the money to pay for it. Hustlers suggests that nowhere is this more true, than in a New York strip club. The rich and the powerful, the masters of the universe, descend on these clubs for their after-hours play and assume their ocean-like wallets will open every door for them. Can we blame the strippers if they decide to exploit this for their own gain?

Opening in the build-up to the financial crash of 2008, Dorothy aka Destiny (Constance Wu) arrives at Moves, a prominent New York strip club, the night-time spot of choice for the super-rich from Wall Street. Money flows liberally in return for the strippers’ performances and their stroking of these masculine egos. Destiny comes under the wing of the club’s star, Ramona Vega (Jennifer Lopez), who teaches her how to manipulate men for cold hard cash. But when that financial crash comes, both women find themselves out of work. In the new atmosphere, the clubs are now staffed by dancers from Russia willing to go further with the men for money. Thrown back together, Destiny and Ramona start a new hustle – target rich men in clubs, get them drunk (and later just simply drug them), drag them to Moves and max out their cards (with the ex-dancers taking a healthy cut). But as the strippers themselves become rich, they start to get greedy. Things aren’t going to end well…

Sharply and wittily directed, Lorene Scarfaria’s film is an excellent crime movie with a little bit of social commentary thrown in. Fast paced and done with just the right amount of flash, it brilliantly rejigs the usual lens that we see strippers through in Hollywood movies. Rather than clichés, hookers with hearts of gold or props for the male characters, here the strippers are real, rounded people working a job – a job that just so happens to involve taking their clothes off. There may be fun to be had at times, but it’s a performance, a show – and a large part of Ramona’s skill is to effectively and convincingly play what she knows the men want to see.

That’s what Scarfaria’s film shows – it’s all a careful hustle, a clever series of tricks and techniques used by strippers to minimise the amount of contact with the customers (and the indignities of their lecherous hands) and maximise cash return, over the longest period of time possible. And these rich Wall Street types are too arrogant and convinced of their own excellence to even notice. The men come out spectacularly badly, a bunch of leering assholes who believe money gives them the right to do anything they like. Scarfaria shoots this with a snazzy Scorsese-ish zing which makes the entire film bounce along like a light version of Goodfellas and Wolf of Wall Street.

And the film has a great deal of admiration for these women who decided to turn the tables – who dealt with the fact that they were basically trapped into a certain role by society by using their skills to steal from the rich. The scheme of conning men is perfect at first – after all what powerful man is going to want to say that he was drugged and fleeced by a gang of attractive women? What is interesting is that the greed that corrupted the men, is gradually the thing the corrupts the women as well: the more successful their scam is, the richer they become, the more they become obsessed with status symbols, just as the men treated them. It doesn’t take long for crime to start moving on from its original Robin Hood targets into something far more indiscriminate.

Leading that charge into hitting any and every target for as much as they can get (rather than a careful but continual fleecing of a select group) is Jennifer Lopez’s Ramona. This is the role Lopez has been waiting almost twenty years for, a charismatic woman so firmly in control of her own life she doesn’t even notice when it starts to hit the skids. It’s the sort of scene stealing role that demands the energy and personality Lopez can bring to it, Ramona being part mentor and mother and part greedy livewire. If you forgot what a promising actress she was in the 90s, this is a great reminder. Ramona is a force of nature, the woman who demonstrates sex is a tool that can produce fabulous, fortune making results. But she’s arrogant enough to let greed and her innate belief in her own infallibility guide many of her decisions.

Lopez also forms a wonderful partnership with Constance Wu in the “Ray Liotta” part of the young naïve innocent, drawn under the mentor’s wings who eventually has to turn against her. Wu draws a lot of charm out of the young stripper learning the ropes, but crosses this really well with an ambition and ruthlessness that only late on finds its limits.

Hustlers bounds along telling a winning, crowd pleasing story with a depth and emotional force that produces great results. We root completely for its female leads, keeping them relatable even when their actions become less sympathetic. Strikingly directed by Lorene Scarfaria, it’s a film about women that makes them firmly the authors of their own destinies – and their own mistakes.
Email ThisBlogThis!Share to TwitterShare to FacebookShare to Pinterest
Labels: Cardi B, Constance Wu, Crime drama, Jennifer Lopez, Julia Stiles, Keke Palmer, Lili Reinhart, Lorene Scarfaria, Mercedes Ruehl