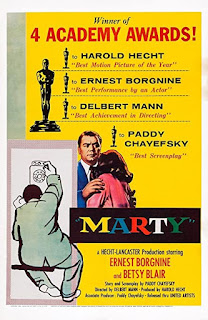 Strange to think today, but until Parasite, only one other film had won both the Palme d’Or at Cannes and the Oscar for Best Picture. That film was Marty and if that fact seems odd today when you watch the film, it’s easy to forget how revolutionary a film about a regular guy with an average job and boring life was back then. Films were about larger than life guys doing big manly things. They weren’t about butchers who lived with their mamas and can’t get girls.

Our butcher is Marty Piletti (Ernest Borgnine) and one night he meets Clara (Betsy Blair), an equally shy chemistry school teacher. They spend the whole night talking, and Marty excitedly plans to call her the next day. Problem is, a brief meeting with his mother (Esther Minciotti) is a disaster – not least because she’s worried Clara could mean her being thrown out of Marty’s home like her sister (Augusta Ciolli) has been – and Marty’s best friend Angie (Joe Mantell) doesn’t think Clara is much to write home about. Under these peer pressures will Marty make that call or not?

That plot summary by the way effectively covers 95% of the film. Today Marty seems so lightweight and slight it’s almost a puff of air. The film was adapted from a one hour TV play, and beat a host of Broadway adaptations (Picnic, The Rose Tattoo and Mister Roberts) to the big one. Today of course a TV play would never be adapted into a movie (in fact if anything Paddy Chayefsky’s play would probably be expanded into a ten episode Netflix drama), but in 1950s America a TV play would have been screened once and then disappeared forever. What better for Hollywood but to assume the one-off delights of TV could be as mined as easily as the best work on Broadway?

So Marty was made and won and it’s a decent, reasonably charming movie even though it’s really hard to see what the fuss is about now. The main delights lie in the script by Paddy Chayefsky, one of the greatest screenplay writers of American film history here winning the first of his three Oscars. The script is simple, well observed, full of cracking little lines, creates some marvellously rounded characters and is careful not to overbalance the overall lowkey effect of the film.

Chayefsky has teed the whole film up so well that most of those involved simply run with the great material they have been given. None of the actors – or Delbert Mann, who received a generous Best Director Oscar – ever hit these heights again. But then that’s about right for a film that is all about the triumph of the little guy (or at least the little guy getting a small day in the sun). Mann marshals the actors (some of whom were in the original TV production) to good effect and basically doesn’t get in the way of the script.

The story itself covers just two days in the life of Marty, but it’s still a gift of a part for Ernest Borgnine, who won an Oscar (surely to the chagrin of Rod Steiger who played the role on TV). The role subtly subverts Borgnine’s persona – Marty has the build for muscular action that matches the series of smarmy, working-class heavies Borgnine had played up to this point (characters much like some of his friends in the drama) but he moves with the nerves of a timid man. Borgnine is as gentle and careful as the picture itself, a shy man who has given up on good things happening to him but comes alive when he meets someone who sees him for who he is rather than what he is not.

That first long date – it takes up well over half the film’s runtime – sees him slowly go through stages from nerves, to stumbled confessions to an excited jabbering as he is so excited to be with Clara he keeps failing (accidentally) to let her speak so keen is he to share everything with her, through to a protective regard and a euphoric celebration. The only slight dated misstep is Marty’s reaction when denied a kiss – which he goes for with the entitlement of a Mad Men era male – but it’s swiftly course corrected in the film as another sign of Marty’s clumsy lack of knowledge of how relationships work. Throughout all this Borgnine is charming, heartfelt, tender and sweet and deserving of recognition for the role.

Opposite him for most of the film is Betsy Blair, who won the role after vigorous campaigning from her and her husband Gene Kelly (who announced he would refuse to do his next film if she was not cast). Mousy, timid and shy but looking for warmth and affection in life, Clara is just like Marty: a woman who isn’t sure what the next step in her life is but is certain that she doesn’t want to spend it growing old alone. It’s another heartfelt performance. The cast is rounded out by the sort of solid minor supporting players who don’t usually stand out, with Joe Mantell getting an Oscar nomination repeating his role as brash best friend Angie from TV. Stand out though is Esther Minciotti (also repeating her role) as Marty’s loving but domineering mother.

It all comes together into something very small, sweet and low-key and if it’s strange to see what the fuss is all about, it’s probably because there have been so many more movies made about ordinary people since then that this first trend setter now looks like nothing too special. But with a marvellous script and some wonderful performances from actors who never got an opportunity like this again, it’s truly a magic moment for all concerned, a once in a life-time film before most of them returned to jobbing roles once more.
Email ThisBlogThis!Share to TwitterShare to FacebookShare to Pinterest
Labels: Best Picture, Betsy Blair, Delbert Mann, Ernest Borgnine, Joe Mantell, Kitchen sink drama