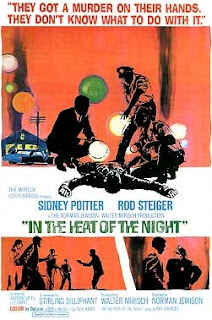 A slim, tight thriller with a social message, In the Heat of the Night won Best Picture in 1967, beating out Bonnie and Cyde and The Graduate (both films with a revolutionary impact on films making) as well as another Sidney Poitier starrer, the even-more message heavy Guess Who’s Coming to Dinner. An unflashy, cleanly made, efficient film, In the Heat of the Night is in some ways a surprising winner – but the shocking depiction of racism in the Deep South at the time still hits home today.

In Sparta, Mississippi a wealthy industrialist from Chicago is found murdered in the street. Who committed the crime? Well surely it’s the well-dressed black man with a wallet full of money waiting to get out of town at the train station. The man is hauled in – only for him to reveal he is an expert homicide detective from Philadelphia named Virgil Tibbs (Sidney Poitier). Tibbs is sucked in to assist local police chief Gillespie (Rod Steiger) to investigate the crime, partly on the order of his boss, partly due to his disgust at the police department’s racism and incompetence, and partly at the pleading of the victim’s widow (Lee Grant) who recognises him as the best officer for the case. But will Tibbs’ expertise crack the case in a town where the idea of a black man in a suit, asking questions and taking no shit, is a still a surefire recipe for a lynching?

Nominally In the Heat of the Night is a murder mystery, but you’ll be hard pushed to remember much about the case after you finish the film. The eventual killer emerges from left field and the steps of the investigation are often unclear. While the film is trim, it does mean the tension around the killer’s identity never really builds up and we never get a real sense of the personality of the suspects (apart from the uniform racism).

Where its real strength is, is in the mis-matched “buddy” movie structure of two men forced to work together, the difference being that both casual and violent racism underpins every interaction Tibbs has in the town. Poitier was seen as a calm and graceful figure, but In the Heat of the Night finally gave him the chance to mix dignity with resentment and anger that had never been seen in a black character on screen before. The film works due to Poitier’s inherent toughness, his lack of compromise and anger at injustice. Poitier was never more hard-edged, defiant and determined to get what he deserves. Unlike Poitier’s other racial buddy movie The Defiant Ones, you can’t imagine Tibbs jumping off the train to freedom to try and save Tony Curtis.

Tibbs isn’t just the smartest, toughest policeman on the screen – he demands to be treated like it. The film’s most famous scene – and shocking at the time – is during Tibbs’ questioning of genteel racist Endicott in his orchid greenhouse. Endicott – whose home resembles nothing more than a plantation, loaded with black workers – is well spoken but inherently racist, and slaps Tibbs when his questions go on too long – only to immediately receive a backhand from Tibbs in return. Endicott is as shocked as audiences were – the idea of a black man striking back was on unheard of.

It’s terrifying and sickening to realise however that the American South at the time was genuinely like this. The slap is a proud moment – but it marks Tibbs for retribution. There is a genuine danger Tibbs will get lynched in this film (twice he narrowly escapes murder at the hands of a gang of furious rednecks). In real life, Poitier was very hesitant to film in the South, and for the brief location shooting in Tennessee slept with a gun under his pillow. The film is littered with casually dropped racial slurs, the politest of which is “boy”. It leads to the famous line from Tibbs that back home “they call me Mister Tibbs” – but you forget that it follows from Gillespie asking him what an n-word copper is called in Philadelphia. And even after that Gillespie only calls him Virgil, as if still not quite able to compute the idea of a black man who can be a “mister”.

The relationship between Tibbs and Gillespie is the heart of the film. And the film is brave to not have this turn into “they were opponents but then they became the best of friends”. Instead there is a sort of grudging respect that grows, even though Tibbs clearly thinks Gillespie is an impulsive racist and Gillespie thinks Tibbs is a stiff-backed but brilliant n-word. Rod Steiger won the Oscar for Best Actor, and he does some fine work as the complex Gillespie. Keeping his explosive energy in check (despite the inevitable outbursts), Steiger sketches out a character who is smart enough to know he isn’t smart enough, who can respect Tibbs’ professionalism and understand on some level that racism is beyond all sense but still drop racial words with an instinctive ease.

Steiger’s Gillespie is a tough-talking, stereotypical cop but he’s also got a sad little hinterland – a late dinner at his home with Tibbs has him confess that Tibbs is his only guest for years – and while he arrests no fewer than three innocent people for the crime, there is no doubting his dedication to justice. Steiger doesn’t apologise for Gillespie’s appalling attitudes, but also does enough to suggest that his racism is learned rather than innate. While never completely sympathetic, especially today, the film lays hints of hope that a racist cop from the South could work side-by-side with a black officer – and that was considerable progress at the time.

But it’s Poitier’s movie, and while in many ways he has the simpler part (and Poitier generously ceded his admiration for Steiger’s skill and craft pushing him to a level he felt he not reached before), Tibbs is the centre of the film. Jewison skilfully shoots Poitier as always the outsider, from his looks and Sherlock Holmes style skills, to the way the camera focuses on his hands touching things – from dead bodies to door knobs – to the visible discomfort of the white men watching him. Tibbs may be arrogant but he’s right and Poitier’s refusal to compromise or offer any concessions is a striking thing – Tibbs is who he is and he won’t change a thing to be accepted by the white man. At the end, he may respect the steps Gillespie has taken – but I doubt he’d consider the man a friend and certainly not a professional equal.

In the Heat of the Night is still shocking for the openly displayed racism and menace of violence that black people faced in the Deep South in sixties America. Jewison’s film is efficiently assembled and tightly edited – not a single minute is wasted in one of the shortest Best Picture winners ever – and while its mystery is little to write home about, its portrait of racism in America is still shocking and stirring and its two lead performances are things to linger in the memory.
Email ThisBlogThis!Share to TwitterShare to FacebookShare to Pinterest
Labels: Beah Richards, Best Picture, Larry Gates, Lee Grant, Norman Jewison, Rod Steiger, Sidney Poitier, Social issues, Warren Oates