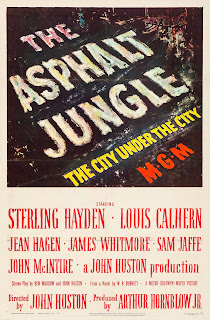 “Doc” Erwin Riedenschneider (Sam Jaffe) is out of the slammer after seven years, and the self-proclaimed “Professor” of criminal plans has a scheme for one final job. But rather than sell it to the highest bidder, Doc approaches crooked lawyer Alonzo Emmerich (Louis Calhern) to fund the crime and then split the proceeds with Doc. To carry out his robbery on a jewellery safe in a bank, he’ll need a gang including get-away driver Gus (James Whitmore) and Gus’ pal and “hooligan” Dix Handley (Sterling Hayden). But even the best laid plans of criminals can fall foul of events and the basic untrustworthiness of criminals themselves.

John Huston surprised some by turning his attention – Oscar in hand from The Treasure of the Sierra Madre – to noir cops and robber’s thrillers, but that was to forget he had made his name with his masterful adaptation of Dashell Hammett’s The Maltese Falcon. And in The Asphalt Jungle he created a small scale but almost perfect slice of criminalise noir, a brilliantly paced and acted film beautifully assembled that effortlessly chronicles the disastrous fall out of a robbery where it seemed everything was going perfectly.

Huston’s direction of the piece is, as nearly always, superlative. His painterly framing of scenes is dead on the money here, his framing of the actors within the scene absolutely without fault. Huston has an uncanny scene for arranging his actors in the minimum number of shots necessary, reducing dramatically the need for clumsy cut aways. Instead multiple actors are often artfully arranged in the frame, allowing the performers to react in the moment and the camera itself to capture the complete story in one smooth shot. It also allows for some great character intros, not least a shot of the Police commissioner in the background of the frame while foregrounded are the hands of his subordinate Dietrich, nervously fondling his hat. Straight away we get the mood of the scene.

This is all part of the brilliant noirish construction of a film that largely features sympathetic criminals – and it’s clear that the film’s sympathy is with the robbers here, the cops either incompetent, bureaucrats or corrupt themselves – either turning on each other, crumbling under pressure, making rudimentary errors that wind up getting them caught or failing into tragic fates that are left questioning what the point of it all was. This is all superbly caught in the moody darkness and shadows that soak over the picture, and highlighted further by the superb script, that packs some excellent lines and beautiful thematic points throughout the film.

It’s also helped by some great performances. Sam Jaffe (Oscar-nominated) is terrific as the cunning calm and businesslike “Doc” who seems unable to understand why things are not quite panning out as he planned, but is heartily sorry that it’s the case. He at least has honour among thieves, refusing to abandon his fellow criminals and quietly disappointed when betrayal raises its head. I love as well his screamish apology that the crime will involve one “hooligan” – or heavy – since he’s not the sort of guy who likes to resort to messy crimes (no matter that things quickly slide out of hand). He’s the sort of professional who expects everyone to play by the same rules, but that doesn’t stop him having his own private passions, particularly for the fairer sex, that will wind up catching him out.

He’s especially proved wrong since Sterling Hayden’s ‘hooligan’ Dix turns out to be the moral force of the gang, despite his down-on-his-luck scruffiness. Hitting crime as a way to finance his dream of buying back his family’s horse farm – and sadly losing most of that finance on the horses – Hayden is gloomy faced and gruff but has his own clear moral code in an affectingly gentle performance of vulnerability beneath the toughness. Debts and betrayal are anathema to him, and he winds up far more of the decent crook than any of the rest – he’s also the only one of the lot who can hold down a loving relationship, forging a genuinely sweet relationship with Jean Hagen’s Doll. Huston’s sympathies are clearly with the down-on-his-luck Dix, a decent guy who has just lost at life.

Of course the crook they can’t trust is the lawyer, a fine performance of snivelling weasliness under a veneer of culture from Louis Calhern. Puffed up, arrogant but desperate for the money and fundamentally weak and easily led, Calhern is excellent as the money man who only adds to the gang’s troubles, led on by Brad Dexter’s wonderfully impatient and ruthless hired gun. Calhern’s sad air of corrupted authority is only enhanced by his lecherous delight in his lusciously young mistress, a radiant early performance from Marilyn Monroe (shot like a classic painting by Huston).

Huston’s film throws this gang together flies together into a superbly detailed and gripping drama of the planning, execution and dreadful fall out of a robbery that clearly inspired the (perhaps even better) Rififi (so much so that it practically has the same story and structure), The Asphalt Jungle is a fabulously made and written pleasure, unpretentious but wonderful story telling marshalled expertly by a director at the top of his game.
Email ThisBlogThis!Share to TwitterShare to FacebookShare to Pinterest
Labels: Brad Dexter, Crime drama, Film noir, James Whitmore, Jean Hagen, John Huston, Louis Calhern, Marilyn Monroe, Sam Jaffe, Sterling Hayden