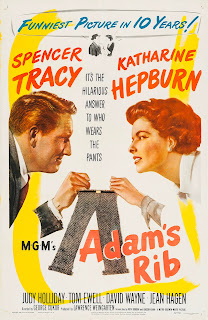 He’s a tough-on-crime DA. She’s a top liberal lawyer with a feminist agenda. So when Doris Attinger (Judy Holliday) is arrested for firing a gun at her philandering husband Warren (Tom Ewell) and his lover Beryl (Jean Hagen), naturally Adam (Spencer Tracy) and Amanda Bonner (Katharine Hepburn) end up on opposite sides of the court case in this witty “battle of the sexes” married life comedy.

Directed with unfussy calmness by George Cukor who, as he often does, hires the best actors, points the camera and lets them get on with it, Adam’s Rib is an enjoyable and fascinating watch, partly ahead of its time in its gender politics, partly relic of another era. It completely accepts the idea that a woman can be a successful, skilful lawyer – the idea isn’t even questioned – while still bemoaning the march of militant feminism. After all even the title is a humourous little reminder of where Eve came from.

The plot revolves around Amanda’s belief that a man firing a gun at a cheating wife would get very different treatment from a woman doing the same: that he would be seen as a man protecting his home, while the woman is a neurotic danger. Adam disagrees strongly with this – a crime is a crime – and to be honest he’s probably right (today Doris would almost certainly go down for actual bodily harm, if not attempted murder). But in the 1940s, this issue gets tied up with women starting to push against the idea that their role was just to follow the man’s lead and not threaten to shake up his existence. And that’s exactly contrary to what happens in this film.

Amanda is played by force-of-nature Katharine Hepburn at her most quick-witted and sharp, a lawyer more successful in many ways than her husband (and by being in private practice, probably the main bread winner as well, although that is never stated). Her place in the court is never questioned, which is interesting in itself in the post-war era where the idea of women in the professional world was just beginning to be seen as a possibility (although lord knows there was still decades to go until it was to be seen as completely normal).

It’s not a position that Adam questions. His main problems are more with the law being used as a tool for a very specific agenda, rather than a feeling that women are crowding into his realm. Played with brusque stuffiness and uncomfortable formality that tips over into moral outrage by Spencer Tracy (again showing his natural gift for both acting and reacting), Adam feels that his belief in the law is being damaged by Amanda’s use of Judy’s case as a political tool for women’s rights, rather than being judged on its actual merits.

So this becomes the spring board for a series of extremely well-acted (and frequently funny) arguments between this tempestuous couple as the court case turns from a flirtatious rivalry into an increasingly bitter one. These ding-dong battles work so well on screen because of the immense chemistry between Tracy and Hepburn, a couple so devoted in real life that they convey this even when really going at each other on screen.

Mix that in with an obvious sexual chemistry between them (and this film is remarkably open about sex, by my count the camera cuts to black to imply sex at least three times in this movie – and the couple have separate beds in their bedroom as per the Hays Code, but only one sees the sheets disturbed by sleeping!) and you’ve got an entertaining show. The courtroom antics are frequently both dynamic and entertaining, and the perspectives of both Adam and Amanda carry force – yes women are treated differently by the law, but you surely can’t deny that Doris broke that law.

There isn’t much room for the rest of the cast apart from the barnstorming Tracy-Hepburn show, with the two seasoned performers tearing through the screen. Judy Holliday comes off best in the second-string as the woman on trial, suggesting enough hypocrisy and two-facedness under the surface of her butter-wouldn’t-melt sweetness. Holliday was also helped by Hepburn’s generous insistence that she be made the focus of their scenes together – Hepburn being keen to help Holliday land the leading role in the film Born Yesterday, the play of which made Holliday’s name on Broadway (it worked and Holliday won the Oscar the next year).

Of the rest, there is a neat, naughty little cameo from Jean Hagen as the other woman, though Tom Ewell mugs as the husband. David Wayne meanwhile plays the Bonners’ next door neighbour, a supremely irritating musician, smug and trying, but whom we’re meant to think of as a witty, eccentric “character”.

The latter half of the film starts to tip a little bit, as Adam has of course to end with the upper hand (he is after all the man!) which he does using underhand tactics and an actually rather unpleasant business with a fake gun (the sort of trick that you imagine if Tracy had pulled in real life, Hepburn would have walked out of the door and never come back). But this is still a film with plenty of top gags and a refreshing look at a marriage where both participants are professional equals and which goes quietly some way in arguing for greater rights for women, before retreating back to its more conservative resolution. Still great entertainment – and Tracy and Hepburn are both at the top of their games here.
Email ThisBlogThis!Share to TwitterShare to FacebookShare to Pinterest
Labels: Comedy, Courtroom drama, David Wayne, George Cukor, Jean Hagen, Judy Holliday, Katharine Hepburn, Romantic comedy, Spencer Tracy, Tom Ewell