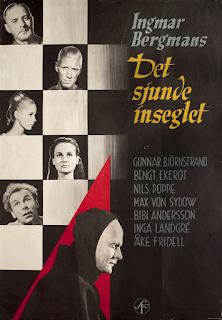 Is there a more famous arthouse film than The Seventh Seal? Winning the Special Jury Prize at Cannes, the film turned Ingmar Bergman into the doyen of the Arthouse across the world and many of its actors into major figures of world cinema. The film so captured the imagination it became one of those films that falls slightly in and out of fashion, largely because it’s almost impossible to come to it fresh. Its style, images and concepts have been so echoed, parodied and teased ever since that it’s become a corner stone. But it should stay in fashion, because it’s a well-made and intriguing film.

In the fourteenth century, a knight, Antonius Block (Max von Sydow), washes up on the shores of Denmark with his squire Jöns (Gunnar Björnstrand). Death (Bengt Ekerot) comes for them, but Block challenges him to a game of chess. If Block wins, Death will leave him be if Death wins Block will go with him. Death accepts, and Block seizes the time this will give him to try and understand more about faith, destiny and man’s place in God’s plans. As the game stops and starts, Block and Jöns travel to Block’s estate, encountering and befriending along the way Jof (Nils Poppe) and Mia (Bibi Andersson) a pair of travelling actors, just trying to make their way in the world.

Bergman’s film is shot in a luscious but very simple black-and-white and juggles profound issues about mankind and faith with an imagination-capturing central concept of man playing chess with death. Bergman based the film on a woodcut from the famous Swedish artist Albertus Pictor (who appears in the film, decorating a church with images of death and plague – themes that run throughout the film) and used it as a jumping off point for a meditations on the inevitable end.

It makes sense then to set the film in the medieval era, where death indeed may well feel like a constant companion. Bergman’s medieval world is a smorgasbord of medieval tropes – some have criticised the historical accuracy of Crusades, plague, flagellants, Pictur, witch trials etc. all happening at the same time, which seems bizarre criticism for a film that features a white faced Death prowling the countryside with a chess board. It works very well though for creating a sense of a parable around the whole film.

Death is a continual in the film. A crowd of flagellants marches through a village at one point, a monk stopping only to harangue the crowd on the fury of God, before a mist descends and seems to pick off most of the crowd, several flagellants disappearing as they walk, leaving a mostly empty field. It’s a visual picture of death, Plague carries off one and all, an active representation of mortality. It leaves a world in which man either contemplates, gets angry or decides to just live day-to-day – reactions that we see in all the film’s characters.

Of course, Block takes the contemplative route, vainly asking what it is all about – what is God’s plan and what meaning does life have? Perfectly using von Sydow’s imperious chill, Bergman makes Block an intellectual straining for understanding, an aesthete who wants to believe his time on earth has all been part of some plan and that he himself has done (or will do) something that matters. Von Sydow is particularly fine in the role, not least in his agonising confessional scene where he slowly but with an increasing world-weariness unburdens his soul to a priest he cannot see – but who we see is of course Death himself.

But that’s just another low blow from Death, a fascinating figure. Played with a benign politeness by Bengt Ekerot, Bergman presents a Death who is cunning, intrudes on world events and doesn’t play fair. He cons Block into telling him a winning chess stratagem, cuts down a tree to claim the soul of the man hiding it and reveals himself to be the leader of a group intent on burning witches. He may be polite but he’s ruthless. No wonder he inspires such fear, and Ekerot may smile but it’s the smile of a man who knows he will win no matter what and everyone will come with him eventually. 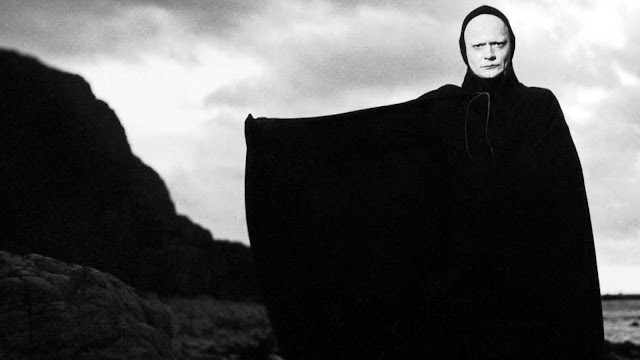 So what is the secret to what life is all about? In Bergman’s medieval world, God seems silent. We see two religious figures: one the haranguing Monk, the other the fallen Priest Ravel – a thief, a liar and a bully. The priest in the Church they visit turns out to be Death. The countryside is vast, unfriendly and bleak. Block’s quest to understand something of what man’s role in creation is seemingly doomed. Perhaps his squire – an excellent Gunnar Björnstrand – already understands what Block needs to learn: there is no grand secret, we must simply enjoy the moments we have been given. His squire is a simple, decent (for his time), unpretentious man with some sense of justice. And maybe that’s the trick.

It certainly seems to be the case with Jof and Mia, the more homespun actors who take pleasure in their family, their lives and the outside and welcome strangers with open arms. Extremely well played by a naïvely sweet Nils Poppe and a radiantly kind Bibi Andersson, these two (with their baby son) are the only people happy. And that happiness even spreads to Block, who starts to forget his concerns with finding a secret to life in the simple happiness of an honest meal, kindly shared. Even Death comments that Block’s interest in the game seems to fade from here. 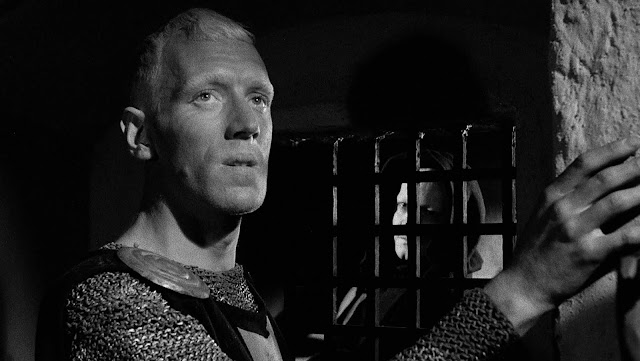 Block’s struggle to understand why we are here, his straining for some sign and his belief (perhaps) that with this he can escape Death slowly melts under his understanding that life is what is around us and the people we share it with, perhaps not some sort of cryptic puzzle for him to untangle. And that’s Bergman’s message as well perhaps, that among our concerns to understand and control our destiny, the most truth (and pleasure) can be found in not thinking about these things. Jof sees early on a vision of the Holy Mary (we do not see it only his face). His wife laughs it off, but later only Jof can see Death – if one vision is true, why not the other? Is Jof’s innocence and decency perhaps the key?

And that is why perhaps Jof and Mia are the only two to escape Death’s grasp. Block finds his moment of purpose - and the quiet smile von Sydow gives here is perhaps the finest moment of his performance – distracting an unknowning Death to let the family escape in the forest. Death relentlessly comes for the rest of the characters at Block’s estate – to be met with anger, begging, resignation, bitterness and a strange, beatific acceptance from the mute housekeeper, who Bergman slowly tracks in on until her face fills the frame. 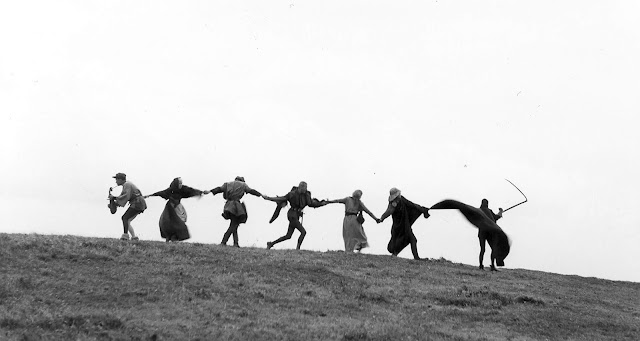 Death then takes them all – giving us the film’s final enduring image, a recreation of Pictur’s painting of Death leading the dead souls in a grim dance to eternity across the hills, each of them flowing in a line behind them seen only by Jof.

What is Bergman’s marvellously assembled – and it is perfectly filmed and edited – film about exactly? Finding peace and acceptance with what is around us and our place in the world perhaps, but it’s such a rich and rewarding film that it unravels other meanings and messages throughout every frame. It deserves to remain in fashion for as long as there are films.
Email ThisBlogThis!Share to TwitterShare to FacebookShare to Pinterest
Labels: Bengt Ekerot, Bibi Andersson, Erik Strandmark, Gunnar Björnstrand, Ingmar Bergman, Max von Sydow, Nils Poppe, Swedish films