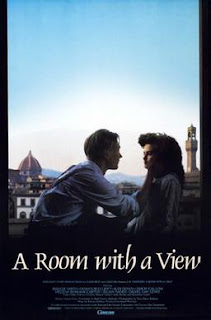 Merchant-Ivory are the gold standard, practically synonymous with costume drama in the 80s and 90s. This really began with A Room with a View, their first true sensation, a box-office smash that won the BAFTA for Best Film and three Oscars. It practically defined what to expect from a Merchant-Ivory production: a classily made slice of English literature, with a wonderful cast of top British talent, tastefully directed with a sly observational wit for the foibles of the British class system. No one does such things better than Merchant-Ivory, and maybe only Howards End and The Remains of the Day did Merchant-Ivory better than A Room with a View.

Based on EM Forster’s novel (and that novel, largely thanks to this film, is probably now his best loved work), the film is set in Italy and England during the early 1910s. Holidaying in Florence, Miss Lucy Honeychurch (Helena Bonham Carter) and her chaperone cousin Charlotte Bartlett (Maggie Smith) are given poor rooms in their hotel – and accept an offer to swap (for the eponymous room!) with Mr Emerson (Denholm Elliott) and his romantic son George (Julian Sands). George, a free spirit, finds himself romantically drawn towards Lucy (and she to him), but something about the free Italian air frightens Lucy, and she withdraws and returns to England where she becomes engaged to the prig’s prig Cecil Vyse (Daniel Day-Lewis). However, when the Emersons rent a house near her home in Surrey she finds herself slowly drawn back once again towards George.

A Room with a View is the perfect expression of delicate, well-judged film-making, with James Ivory marshalling his precise judgement to create a luscious and involving reconstruction of the novel, which carefully layers its social and emotional observation with a dry wit. Ivory is a master of allowing the novel – and the film – to speak for itself, not intruding with flourishes but allowing the camera to hold moments. He captures wonderful moments of slightness: who can forget the camera holding on a rejected Cecil as he takes a moment to calm himself, then sits and begins to systematically retie his shoe laces? It’s a gentle, unforced moment of direction but it’s what makes the film work.

And the careful grace and stateliness of much of A Room with a View is part of the film’s point. All this taste and manners, all this finery and wonderful design, is of course a trap. It’s precisely this pristineness and neatness that inhibits people from following their hearts, from actually having a bit of carpe diem. It’s telling that one of the film’s most striking moments involves George, Lucy’s brother Freddy and churchmen Mr Beebe going skinny-dipping (with long-shot full frontal nudity). There is something joyous for these men to literally cast off (for a few minutes) the shackles of society to just muck around in the all-together. And it’s a sort of exuberant liberal freedom you just don’t see in other parts of the film. 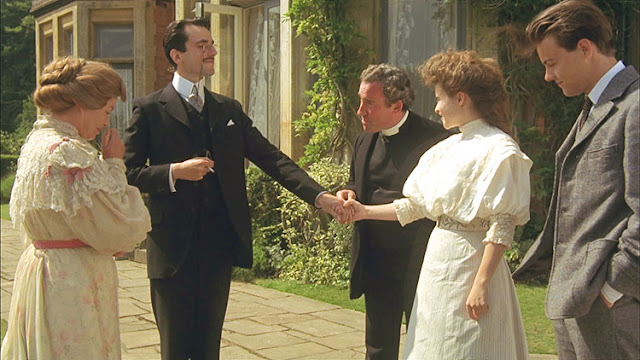 The film’s main theme is to see if Lucy will discover – and accept – enough about herself to follow the sort of romantic longings she feels within herself or if she is going to knuckle down and conform. Italy is a perfect sign of this – it’s hot, temperamental, the people wear their passionate hearts on their sleeves (whether that’s making-out in a carriage in front of uptight churchmen or stabbing each other in the piazza) – and it’s all that energy and lust for life that Lucy seems unsure about, but which George is chasing after. And it’s difficult to cast aside the rules you have grown up with – and scary – to find something a bit freer. Although I think you could criticise Ivory’s neat competence for failing to really visually get a contrast in look between Italy and England.

The film is blessed with a superb cast of British character actors. Helena Bonham Carter is excellent (in only her second film role) as a young woman who knows her mind but doesn’t want to follow it to its logical ends, part independent and free-thinking but also putting a constant block on her own instincts. Julian Sands as George does a decent job, although already the film (by far and away the best part he ever got) exposes his studied woodenness and flat, uninteresting voice and he often seems straining for a sort of depth and Byronic passion that is slightly beyond his range.

Maggie Smith and Denholm Elliott were both Oscar nominated, and both bring their A-game to the roles. Smith is perfect as a spinster who slowly reveals she has more sense of life’s lost opportunities than expected (even if the part is one she could play standing on her head), while Elliott gets lot of scene-stealing mileage from a sweetly eccentric Mr Emerson. Simon Callow, also in his second film role, probably gives his best (and most intriguing performance) as Mr Beebe the affable but subtly sleazy clergyman.

The film is however stolen by Daniel Day-Lewis as Cecil Vyse (originally offered his choice of parts between George and Cecil). A Room with a View opened the same day as My Beautiful Laundrette in the States and audiences were amazed that the same actor could play a self-important prig and a gay, punk fascist. Day-Lewis is the embodiment of fastidious preciseness, a man so studied in every second that each movement seems planned, with no touch of spontaneity. He even kisses Lucy with a carefully placed precision. He’s arrogantly certain of his place in the world and every moment of his life has been planned in advance with careful exactitude.

It’s the jewel in the crown of this perfect costume drama. Merchant and Ivory had longed to film the works of EM Forster for decades, and had to wait until King’s College, Cambridge (the rights holders) had someone in place who actually liked films until it was considered. They expected the main interest to be around Howards End (don’t worry its time would come!) and A Passage to India. But in A Room with a View, Merchant Ivory felt there was an unappreciated gem. They were right.
Email ThisBlogThis!Share to TwitterShare to FacebookShare to Pinterest
Labels: Daniel Day-Lewis, Denholm Elliott, Helena Bonham Carter, James Ivory, Judi Dench, Julian Sands, Literary adaptations, Maggie Smith, Merchant-Ivory, Rupert Graves, Simon Callow