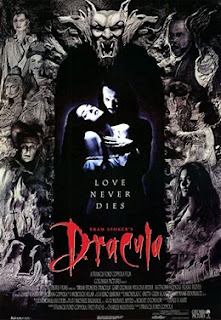 In the 90s Francis Ford Coppola planned a series of high Gothic films of classic monster stories, kick starting the plans with his own production of Dracula (the only other film that came of this was Kenneth Branagh’s equally operatically overblown Mary Shelley’s Frankenstein). Going back to the story of the original novel (more or less), Coppola presented a deliberately high-intensity, theatrical, over-the-top version of Stoker’s tale that becomes as overbearing as it is visually impressive.

In 1462 Vlad the Impaler (Gary Oldman) renounces God and becomes Dracula, after false news of his death leads to his wife (Winona Ryder) committing suicide and being damned by the church. Over four hundred years later, the immortal vampire Dracula plans to travel to England, with his plans unwittingly aided by his solicitor Jonathan Harker (Keanu Reeves). His interests are peaked all the more when he sees a picture of Harker’s fiancée Mina (Winona Ryder again) – the reincarnation of his dead wife. Dracula heads to England, preying on Mina’s friend Lucy (Sadie Frost) leading to an alliance of Lucy and Mina’s friend, led by Professor van Helsing (Anthony Hopkins) to combat Dracula’s villainy and save Mina from her own dark temptations to join the besotted Vampire.

Coppola’s film doubles down on Gothic romance, thundering through the action with everything dialled up to 11. The (rather good) score hammers home every beat, the camera swoops and zooms through a parade of tricks, wipes and dynamic angles with cross fades frequently throwing two images on screen at the same time. It makes for a sensual – in more ways than one – overload, but also a rather oppressive viewing experience, with no respite or sense of calm but every single scene delivered with stomach churning acceleration.

It’s a film directed with a deliberate operatic style, that celebrates (and makes no attempt to hide) its set-based theatricality. The opening sequence sets the tone with its Kurosawa inspired costumes in front of an Excalibur style blood-red style, with battle scenes (and impalings) staged as an elaborate puppet show. Oldman – with a hammy Eastern European accent that you could wade through like treacle – then rages and roars over his wives crumpled body, stabbing a cross that leaks blood all while images are cross-cut showing his wives demise and the beginnings of his own monstrous transformation. The film doesn’t ease up from there.

To be honest Coppola massively over-eggs the pudding, producing an over-blown monstrosity of a film that shouts and shouts and shouts and drains all subtlety from every frame. In particular the sexual undertones of Vampirism – and the harsh male judgement of female sexuality – that the book explores are placed unsubtly front and centre. Every vampire attack is presented as a positive ravishing, Frost and Ryder writhing orgasmically (poor Frost has to undergo the indignity of being humped and bitten by a Dracula in part human-part wolf form) while boobs are left on display after every single assault. From an early scenes that sees Lucy and Mina gawping at a pornographically illustrated Arabian Nights, we are left in no doubt that IT’S ABOUT SEX YOU KNOW. 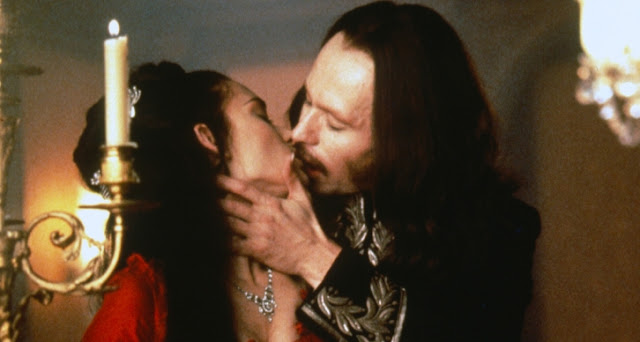 Coppola shows no restraint at all in his directing, which leaves nothing to the imagination, and ends up leaving the actors adrift between a film that is part serious attempt to film the book and part ludicrous bodice ripper, like the cheapest 60s salacious horror film from the worst excesses of Hammer.

It certainly leaves the actors adrift. Oldman gives it a go with gusto, even if he seems completely lost as to what tone this character should hit (is he a monster, a lost soul, a conflicted lover, a megalomaniac – who knows?). Anthony Hopkins channels Orson Welles with the sort of ham that was to become more-and-more his go to in later years. Winona Ryder does her best with a role that oscillates wildly between Good Girl and Minx. She’s saddled with an English accent, which restrains like a straitjacket. Tom Waits has fun as the insane Renfield (here imprisoned in a crazy asylum that resembles a medieval dungeon).

The rest of the performances are pretty much abysmal. Poor Keanu Reeves is left ruthlessly exposed, horrendously miscast as a stiff-upper lip English lawyer in a performance that surely goes down somewhere in history as one of the worst ever. His acting here would barely scrap by in a school play, his delivery of the dialogue wooden beyond belief and some talcum powder added to his hair for the film’s later sections only makes him look ridiculous. Reeves is a decent performer in the right role, but he was never worst case than this. But then the rest of the cast are pretty much just as bad: Frost is out-right awful, hopelessly unable to make Lucy anything other than a slut, while Grant, Campbell and Elwes are all wooden and dull to a man.

The film does get some points for reverting closer to the plot of the book – unlike many versions – although the addition of the love story between Dracula and Mina is marred by tonal problems and the utter lack of chemistry between Oldman and Ryder (they famously fell out on set and the film never recovers). Coppola directs the film with no discipline at all, and no sense of balance between spectacle and story. While it has many merits in its design – it won no less than three Oscars and the costumes, make-up for Oldman and much of its look and style are flawless – it’s basically a pretty over-bearing and dreadful film that shouts at the viewer so long and so hard that it becomes easier in the end to laugh at it rather than with it. A sad misfire.
Email ThisBlogThis!Share to TwitterShare to FacebookShare to Pinterest
Labels: Anthony Hopkins, Billy Campbell, Cary Elwes, Francis Ford Coppola, Gary Oldman, Keanu Reeves, Literary adaptations, Richard E. Grant, Sadie Frost, Tom Waits, Vampire film, Winona Ryder