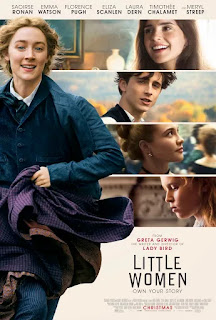 Spoilers: Such as they are but discussion of the film's ending (or rather Greta Gerwig's interpretation of it) can be found herein...

There are few novels as well beloved as Louisa May Alcott’s Little Women. So much so – and so successful have been the numerable adaptations, not least Gillian Armstrong’s1994 version – that it’s hard to see what a new adaptation could bring to the story that hasn’t been covered before. A new window on the story is triumphantly found though in Greta Gerwig’s fresh and vibrant adaptation, blessed with some terrific performances, and telling its own very distinctive version of the story.

Gerwig’s version crucially starts off in the sisters’ adult lives: Jo (Saoirse Ronan) in New York struggling to make it as a writer, while Meg (Emma Watson) nurses the ill Beth (Eliza Scanlon) back home with Marmee (Laura Dern), and Amy (Florence Pugh) encounters their childhood friend Laurie (Timothée Chalamet) in Paris. This is intercut with the story of their growing up in Massachusetts, with the past story line eventually catching up with the present day.

If that sounds like it should make the story hard to follow, don’t worry – this is astonishingly confident work from Gerwig, wonderfully directed with zest, fire and imagination (making her exclusion from the Best Director list at the Oscars even more inexplicable – chalk that up I guess to sexism against pictures about “girls” and the fact it’s not as overtly flashy as the rest of this year’s nominees). This takes a familiar book, and fires it up with all the energy of independent, modern cinema, creating something that feels hugely fresh and dynamic. The cross cutting between the two timelines work beautifully – not only is it always perfectly clear, but it also makes for some wonderful contrasts between events in the past and present. None less than the recovery of Beth from TB being followed (with an almost shot-by-shot echo in its filming) by the reactions to Beth’s death. Inventions like this add even greater depth and meaning to the moments and hammer home some terrific emotional high points.

Gerwig’s style throughout the film invests the story with a great energy, particularly in creating the warm bohemian attitude of the March family. This really feels like a family – conversations between them are fast, people talk relaxedly over each other, the chemistry is completely real, and the camera captures in its movement the warmth and energy of these characters who are completely comfortable in each other’s presence. It’s no surprise that Laurie is taken so quickly with this family, or wants to be part of it. Gerwig invests the family with a dynamic, excited sense of freedom and urgency. Helped by the warm glow that the childhood sections of the film are shot with, these scenes hum with a glorious sense of familial warmth and excitement.

The camera often moves with careful, but perfectly planned, movement through scenes, mixed in with moments of fast movement – following Jo through streets, or the playful exuberance of Jo and Laurie’s first meeting (and dance) at a society ball. It’s a vibe that carries across to the performances, anchored by Saoirse Ronan’s fabulous performance as Jo. Fervent, intelligent, idealistic but also stubborn, prickly and difficult, Ronan’s Jo carries large chunks of the film, with the character skilfully mixed in with elements of Louisa May Alcott. Ronan most impressively suggests a warmth and familial love for Laurie at all times, that never (on her side) tips into a real romantic feeling. She also has superb chemistry in any case with the excellent Timothée Chalamet, who is just about perfect as a dreamy, but quietly conventional in his way, Laurie. 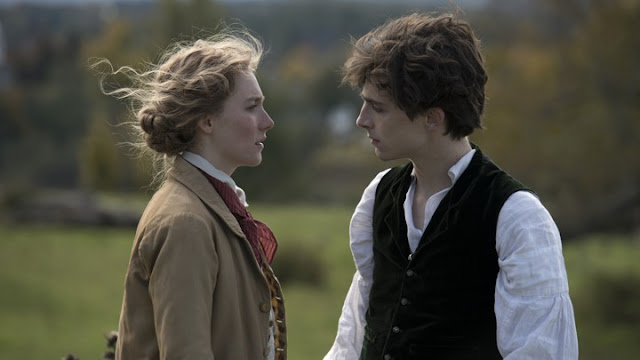 Gerwig’s primary rejig – and a reflection of the new structure she is chosen – is to allow more screen time to Amy, usually the least popular of the four sisters. She’s also helped by a sensational performance by the Oscar-nominated Florence Pugh as Amy, who not only plays a character perfectly from her mid-teens to her early twenties, but also invests the character with huge amounts of light and shade. The film gives a great deal of time to Amy’s time in Paris – her frustration with living in Jo’s shadow, her longing for her own artistic career (and recognition of her conventional talent – brilliantly established by a wordless glance Pugh gives an impressionist painting compared to her own literal effort) and her own romantic feelings and dreams. Cross cutting this with her past actions – her more temperamental and less sympathetic moments (burning Jo’s book!) that have pained generations – gives the audience far more sympathy and understanding for her. Pugh is also pretty much flawless in the film.

There are a host of superb performances though, with Watson capturing the duller sense of conventional duty in Meg, but spicing it with a sad regret for chances lost; Laura Dern is wonderfully warm as Marmee, but mixes in a loneliness and isolation below the surface; Chris Cooper and Meryl Streep sparkle in cameos. There is barely a false step in the case.

All the action eventually boils towards the ending – and Gerwig’s bravest and most unconventional decisions, in subtly adjusting the final conclusion of the story. At first it seems that the cross cutting of the story has short changed heavily the Bhaer-Jo relationship (Bhaer appears only in the first half an hour of the film and the end), as it cannot lean too heavily on romance when many in the audience will still be expecting a Jo-Laurie match up.

But Gerwig actually uses this as a skilful deconstruction of the novel. Always feeling that Alcott desired Jo to be a single author – but inserted the marriage to Bhaer at the end to help sell the book – Gerwig effectively has Jo do the same thing. At a crucial moment in the final scenes, we cut to Jo negotiating with her publisher (a droll cameo by Tracey Letts), who insists on a happy ending. Cue a “movie style” chase to intercept a departing Bhaer (shot with the golden hue of the past, while Jo’s meeting with the publisher has the colder colours of the present). Our final shot shows Jo watching her book being printed, cross cut with a golden hued vision of “Jo’s” school with husband in tow.

It’s a genius little touch, as it’s subtle enough to allow viewers to take the happy ending as it appears in the surface, but smart and clever enough to make the movie unique and different from the other versions (and that ending from the 1994 version is hard to top!). It may undermine the final relationship – and offend those who like the idea of Jo deciding she wants something different than she at first thought – but in its freshness it can’t be challenged. It also makes for a film from Gerwig that is both fresh and exciting and also bracingly and thrillingly in love with Alcott and her work.
Email ThisBlogThis!Share to TwitterShare to FacebookShare to Pinterest
Labels: Bob Odenkirk, Chris Cooper, Eliza Scanlen, Emma Watson, Florence Pugh, Greta Gerwig, James Norton, Laura Dern, Literary adaptations, Louis Garrel, Meryl Streep, Saoirse Ronan, Timothée Chalamet, Tracy Letts