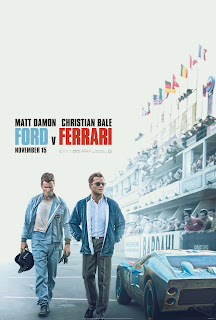 There are few more exhilarating things than going really, really damn fast. It’s a primal glee that James Mangold’s racing film Ford v Ferrari (or Le Mans ’66 as it seems to be known over here) taps into, roaring with exciting, fast-paced energy lashed onto a good old buddy movie as two plucky underdogs get the chance to overturn the champs and claim the title. It’s the story of any number of sports movies, but it still works here. It ain’t broke, after all.

It’s the early 1960s and the sales of the Ford Company are down: the baby boomers don’t want to be driving the dull, safe cars of their parents. They want something super sexy. Despite his hesitation Henry Ford II (Tracy Letts) is persuaded the best way to get that sexy image is to get a racing car – and if he can’t buy Enzo Ferrari’s (Remo Girone) company, then by hell he’ll spend whatever it takes to give Ford the best racing team in the world. Targeting the Le Mans 24 hour race, he recruits retired-driver-turned-designer Caroll Shelby (Matt Damon) to mastermind building a car – and Shelby recruits demanding, prickly, maverick Brit driver Ken Miles (Christian Bale) to help him design it and then drive the thing. But what to do when Miles’ blunt plain-speaking and individuality looks like it won’t make him the best spokesman for selling Ford cars?

On the surface Ford v Ferrari is pretty much your standard Sports film. Two teams, an underdog and a champion, a pair of mavericks who think outside the box, the struggle for success – met with initial failure before victory – all told through a familiar structure of brothers-in-arms, obstructing suits, supportive wives at home and plenty of carefully detailed expert recreation of sporting events. It’s a collection of familiar ingredients, but very well mixed together by Mangold (one of Hollywood’s finest middle-rank directors, a sort of heir to Lumet).

The real twist however is that the rivalry is not really about Ford and Ferrari. In fact the film might have been better titled Ford vs Ford. Because the main thing standing in the way of Shelby and Miles isn’t Ferrari – with whom they actually have a rivalry built on mutual respect – but with the bottom-line, sales-first suits who are backing them. It’s a parallel with everything where sales and the buck count more than anything, but you feel Mangold might well have related it most to Hollywood producers. What is Ken Miles, but the genius auteur director who the money-men just won’t trust to churn out the mass-market product they need to lift the share price? Henry Ford (very drily played by Tracy Letts) may have one visceral moment of excitement when placed in the passenger seat of a fast car – but fundamentally he doesn’t give a damn about the sport at all, except how it could help him shift a few more Mustangs.

Shelby and Miles’ struggles are not with the car, the engineering problems or Ferrari – they’re with the Ford VPS (in particular Josh Lucas’ incomparably smarmy Leo Beebe, a corporate man to his fingertips who probably bleeds stock tips) who want a product they can sell, far more than a product that can win. Obstacles are constantly thrown towards Shelby and Miles from their bosses – everything from engine design to race strategy receives a series of notes, comments and instructions from the Ford hierarchy. The choice of driver is most important of all – and they don’t want the demanding Ken Miles behind the wheel of their car. Because mavericks like that don’t sell Mustangs.

As Miles, Christian Bale gives a performance of pure enjoyment. Juggling a version of his own natural accent (which sounds odd – part cockney, part scouse – but works brilliantly) Bale gives the part just the right amount of that peculiar chippy Britishness, that resentment of people in authority, that hostile reaction to the stench of bullshit. Driven, determined but totally unwilling to suffer fools – exhibited almost immediately with him dressing down a prat who isn’t a good enough driver to handle the sports car he’s purchased – Miles is clearly never going to be the company man Ford wants. But with his passion for “that perfect lap”, his determination to work night and day to achieve that and – in a nice change – his warmth for his family and equal decision making with his wife (a slightly thankless part for Catriona Balfe) he’s a character you quickly take to your heart. It’s a great, charisma-led performance from Bale, who also gets nearly all the best lines.

It does suck a bit of the oxygen from Damon, who plays the straight-man as Shelby who is just as passionate but can (just about) speak Corporatese. With a Texan drawl, Damon does the legwork of the movie extremely generously, quietly driving many of the scenes and handling much of the more emotional arc of the movie. The two actors form a superb chemistry – peaking with a hilarious fight scene, your chance to see Batman clobber Jason Bourne with a loaf of bread (both actors, famous for muscular fight scenes, clearly enjoy a fight scene straight out of Bridget Jones). It’s a bromance that really works – and carries at certain points a genuine emotional force.

Mangold packages this material perfectly – and the racing sequences are brilliantly done, engrossing, speaker-shaking displays of racing, fabulously edited. The film itself is probably too long, and the sections away from the race track are sometimes so familiar in their structure and tone that they sometimes drag a little bit, as if the fierce momentum of the racing scenes can’t carry across to the rest of the film. But with fine performances and expert handling, this is certainly a number you’ll be happy to test drive.
Email ThisBlogThis!Share to TwitterShare to FacebookShare to Pinterest
Labels: Caitriona Balfe, Christian Bale, James Mangold, JJ Feild, Jon Bernthal, Josh Lucas, Matt Damon, Sports films, Tracy Letts