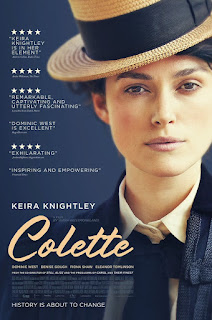 In the era of #metoo what could make for a more relevant storyline today than this biography of Gabrielle Colette (Kiera Knightley), a young woman who marries literary playboy Henry Gauthier-Villars (Dominic West) aka Willy. Henry brings her back to Paris, and reveals the secrets of his success – he is the front man for a host of ghostwriters, producing articles and even novels for the public. Colette writes a novel for the “factory”, based on her own childhood – Claudine à l’école – which Willy initially rejects but later publishes under his own name (after he has suggested revisions to improve its plot and general raunchiness). The book is a smash – and Willy is a sensation – as are the sequels, but the growing frustration Colette feels at her lack of recognition, combined with the growing sense of freedom she finds in their open marriage, starts to lead her to question what she wants from her own life.

Colette is a decent, rather middle-of-the-road and middlebrow literary biography, that dabbles with controversy and racy content, but essentially follows a fairly traditional structure of our hero finding her own voice. The most interesting thing about it, despite the obvious surface message of the woman exploited by a man, is to suggest that while Willy certainly profited from Colette’s work, he was also the primary driver in her development as a writer and that the two of them maintained a stable working partnership for years until events led to their collapse.

Much has been made in particular of a scene where Willy locks Colette into a room to write – and there isn’t a single review that hasn’t mentioned it – but, in the context, it’s Colette who has failed to focus on the writing (which the pair have already been paid for), or wdo the work she has committed to do, much to Willy’s disappointment when he returns to the country home that the advance for the book has paid for. While her objections are at first furious she swiftly settles into writing in the room (and there is no suggestion that this event is any more than a single one-off, a shock tactic from Willy to get Colette creating again). This isn’t to say the film is suggesting that Colette shouldn’t have received all the credit and freedom from the start, but it does raise more interesting questions: yes Willy was taking advantage of her, but yes he also pushed her to achieve things she would never have done herself.

It’s all part of Dominic West’s superb performance as Willy, skilfully balancing a man who (until the final act of the film) is neither flat-out villain or misunderstood hero, but a man of shades of grey: flawed, selfish, lazy, thoughtless but also encouraging of his wife’s exploration of her own sexuality and creativity, supportive and capable of acts of charming sweetness and kindness. Westmoreland makes clear that for much of the marriage their relationship was functional and a good match, for all it was founded on the false sands of Colette being denied the public credit for her own work. Sure he spunks their money up the wall continuously, but he also helps her become an artist.

For all the film’s workmanlike structure and obvious telling, this does make for a far more interesting version of the story than the straight “ogre-victim” story you might expect, even if it does start to get a bit bogged down in sexual shenanigans. The mostly focus around bisexual American socialite Georgie (Eleanor Tomlinson with a soapy Southern accent), who becomes the lover of both Colette and Willy. It’s part of the sense of Colette questing for an identity, but the idea of what this is and what the journey is never quite solidifies into something really incoherent. Though I suppose you could argue the journey is Colette realising she doesn’t need Willy, and that shorn of him she can survive far better on her own than he can without her.

Part of this is connected to Keira Knightley’s solid, but not quite deep enough, performance as Colette. As is often the way with her best work, Knightley works her socks off here and is clearly completely committed to the role and the film – but she just isn’t quite capable of elevating the depths of her skill to meet the full demands of the film. She doesn’t disgrace herself at all, but it’s a performance that never had enough fire and life to really become compelling.

It means you don’t quite get the powerful feminist message the film is aiming for. Knightley’s performance isn’t quite strong enough to counter-balance West, and the film’s failure to put together a compelling story line around what Colette actually wants – the film eventually settles for a rather ill-thought out phrase about wanting to lead her own life – means it peters out without much impact. There is a powerful story in here around women being denied recognition for their own talents and skills, but it never quite coalesces as it should.
Email ThisBlogThis!Share to TwitterShare to FacebookShare to Pinterest
Labels: Aiysha Hart, Biography, Denise Gough, Dominic West, Eleanor Tomlinson, Fiona Shaw, Keira Knightley, Wash Westmoreland