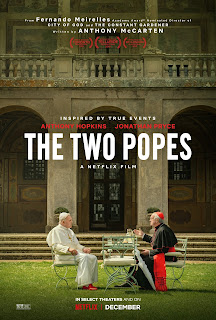 Hollywood loves a buddy movie. And what buddy movie could be more off the wall than Two Popes: one a German traditionalist with a reputation for rigid interpretation of church law who reads Latin for fun, the other an easy-going Argentinian reformer with a love of football and tango. So that’s what you get with The Two Popes, a surprisingly funny and engaging film about Papal politics, dashed with a pleasingly even-handed perspective on its two central characters.

In 2012, Cardinal Jorge Mario Bergoglio (Jonathan Pryce) is planning to hand in his resignation as Archbishop of Buenos Aires to Pope Benedict XVI (Anthony Hopkins), now in his seventh year of Pope. Bergoglio feels that he has little left to offer the church, and this own reformist ideas are out of step with the current leadership. He feels his best calling would be to return to a simpler, parish priest life. But Benedict XVI summons him to the Vatican to dissuade him – leading to a series of prolonged heart-to-heart conversations between the two that see a thaw in their relationship, heartfelt confessions from both men on their failings, and Benedict’s revelation that he plans to resign from the Pontificate – and wants Bergoglio to succeed him, as Bergoglio can offer the reform to the church that Benedict cannot.

The Two Popes is a terrific adaptation by Anthony McCarten of his own stage play. It shows us Benedict’s conservative, safety-first policies (towards everything from financial scandals to child abuse scandals) and Bergoglio’s more modern, inclusive church, but largely avoids holding one up as wholly superior to the other, or turning the story into a simple good guy/bad guy conflict. Instead it focuses on showing the faults and positives of both men, and how both men felt a calling and need for their service at different times – and how this loss of calling (something both men suffer from at the start of the film) can be reborn through patience, listening and reflection. Meirelles directs this very theatrical piece sharply, with a keen eye for expanding it into film with a combination of intriguing angles, visual style and confident editing.

Unfolding over the course of several increasingly heartfelt conversations – which progress from awkwardly blunt confrontation, through thawing openness, to something near to a confessional – this is a film that uses the Hollywood convention of a mismatched couple to allow an intriguing exploration of the price and value of faith and the difficulty of duty. Sharp commentary is made on the backgrounds of both men – Benedict growing up in Nazi Germany, the sharp criticism of Bergoglio’s perceived lack of action during the Military Junta coup, which led to his dismissal as head of the Jesuit order in Argentina. Both express guilt, regret and even touches of self-loathing – but both also react to those feelings in the other with patience and support.

It also helps that these conversations around church politics and religious intent are told with plenty of fresh and entertaining jokes. There is always a lot of mileage to be had from seeing people like the Pope delightedly watching trashy TV or failing to recognise either ABBA or the Beatles, while Bergoglio’s homespun openness and willingness to talk with anyone about anything (not to mention his passion for football) throw open no end of comic possibilities from seeing this prince of the Church insist on being treated as just a regular joe.

It also gives loads of opportunities for its two stars, arguably Wales’ leading actors (both highly deserving of their Oscar nods). Hopkins, given his best material in years, is brilliant as Benedict: irascible, imposing, morally certain and firm but also playful just below the surface and a man profoundly aware of his own mistakes and failings. Hopkins delivers the lines with just the right touch of twinkle in his eye.

He also bounces wonderfully off Pryce who is possibly at a career best as Bergoglio. A brilliant physical match for Pope Francis, Pryce’s performance captures perfectly the unaffected humility of the man, but also his intensely sharp personal reflection and the burdens of guilt, as well as the shying away from confrontation that is Bergoglio’s greatest failing. Pryce’s comic timing is impeccable, but he also carries the movie’s heart and soul with affecting skill, pulling off the difficult trick of making a good man a compelling one.

Meirelles’ film is a talky affair – and its construction is a little pat at times, like a very well assembled production line buddy movie and biopic. It never completely escapes the clichés of two-very-different-people-coming-together that is one of its heartbeats, but it does it all so well, with such grace and wit – and two such terrific performances – that it hardly matters. Another big success for Netflix.
Email ThisBlogThis!Share to TwitterShare to FacebookShare to Pinterest
Labels: Anthony Hopkins, Biography, Christian movies, Fernando Meirelles, Jonathan Pryce