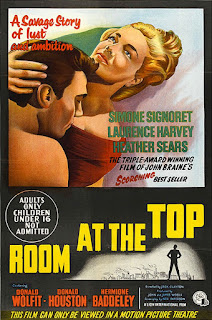 If there is one thing that preoccupied British cinema of the late 50s and early 60s it was class. How was a working class boy from the wrong end of the tracks supposed to pull himself up and make himself some room at the top? That’s certainly one of the many themes that you find in Jack Clayton’s sensational hit, nominated for a string of Oscars, but it’s also as much about how the search for that mystical nirvana that sees you invited for tea and crumpets at the conservative club, also means sacrificing huge shards of your own soul.

Joe Lampton (Laurence Harvey) arrives in the a Yorkshire town to take on a dreary, poorly-paid post in the Treasurer department of the local council – but has the bonus of being office work that gives him a chance at working his way up to the top. To that end he sets his ambitious cap at Susan Brown (Heather Sears), daughter of major local business magnate Mr Brown (Donald Wolfit). But Joe is also a man of his own passions, which fly in the face of his ambition, and he finds himself drawn towards married older French woman Alice Aisgill (Simone Signoret), who he meets at the local amateur drama club and who encourages him to surrender his ambitions and instead lead a life of contentment and happiness with her. Which possible life will Joe choose?

Perhaps the very first of what became the kitchen-sink genre, Room at the Top is beautifully filmed by Jack Clayton (as you would expect), but also brings the other major strength of this overlooked director to the fore, his ability with actors and to wring all-encompassing tragedy from the most everyday of circumstances. That’s what he does here, creating an almost epic scale of internal struggle for its hero, prickly as he is, drawn between two deeply conflicting goals, that asks what profits a man who gains the world at the cost of his soul?

Because, Room at the Top is that uniquely British film, that shows ambition and desire to better yourself often comes hand-in-hand with the sort of ruthless disregard of your roots, backgrounds and those around you in order to find your own path. Joe Lampton is a former POW, chippy, insecure, bitter, angry and determined to gain the sort of life he deserves. Of course it’s not hard to agree that he is more deserving than some of the tweedy, chinless fools around him and the sneers and condescension he receives from the officer class (his rival for Susan’s affections delights in calling him Sergeant, and reminding him constantly of his superior war record) is more than enough to motivate Joe.

What’s really striking about Joe therefore as how weak the character is. In undoubtedly the finest performance of his career, Laurence Harvey (a difficult and unreadable actor, with a style bridged between minimalism and woodenness) bravely shows both the bullish determination and the fundamental insecurity and weakness of Joe. A character who defines himself solely around what he feels he can achieve, he’s also a man completely unaware of what happiness is and how he to get it – and the thawing of her personality into something warmer and more loving with Alice, only serves to highlight how misguided and weakly he suppresses and kills such feelings in order to seize opportunities in life he feels entitled to.

It’s a rich contrast to Alice herself, a woman who is far braver and more certain about what she wants, and willing to fly against the conventions expected of her if it means she can gain happiness. The novel was adapted to turn Alice into a French ex-pat (married to a brutally cold RAF type played with an imperious selfishness by Allan Cuthbertson) solely so Signoret could be cast in the role – and it’s a match made in heaven. Simply wonderful, Signoret brings the part not only an imperious sexuality, but also a deep and lasting vulnerability under the surface of Euro-chill, a woman who we see opening herself up to the possibility of an affair becoming something truly lasting and deep, who has the courage to understand who and what she wants in a way Joe never can.

The tragedy is in that inability of Joe to understand his yearnings. Clayton’s brilliantly subtle film demonstrates time and time again, contrasting its romantic freedom laced with passion when Joe and Alice are together with the stilfed, contained suppression and chill that the more buttoned up, angered Joe meets elsewhere. If Joe had the will and strength he would top fighting for the things he should want in order to seize the opportunities he actually wants. His tragedy is that he can’t – and can’t begin to understand himself, or acknowledge his desires, until it is too late.

This was all a deep shock – and carried real power – at the time when Britain was shifting out of post-war hierarchies into the freer 60s, and Room at the Top was a massive hit at the box office. But it made such impact because its attitudes feel so deep and real, and the simple, everyday tragedy it details of two relationships doomed for different reasons, bound together by the self-defeating ambition of its lead character. Because wherever he goes, Joe will have people like Mr Brown (Donald Wolfit is very good by the way, in a role far outside his usual style) constantly reminding him of his oik status, so any victory in inbuilt with failure. Joe’s ambition and intelligence serve largely to blind and deflect him from the things he really wants. A lesson for us all.
Email ThisBlogThis!Share to TwitterShare to FacebookShare to Pinterest
Labels: Donald Houston, Donald Wolfit, Heather Sears, Hermione Baddeley, Jack Clayton, Kitchen sink drama, Laurence Harvey, Simeone Signoret