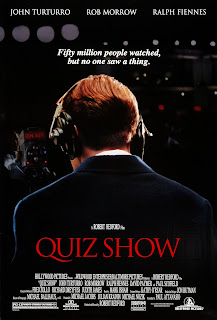 Imagine, if you can, a time when we trusted everything we saw on television. When whole nations crowded around to watch a show, and would run home to make sure they didn’t miss it. When the people appearing on the box in the corner were like members of the family invited into our home. In our cynical age of streaming and distrust, such ideas are impossible to imagine. Now we doubt anything we are shown on the box – and the first brick in that wall fell into place with the rigged quiz show scandals on American television in the 1950s.

Twenty-One is the biggest hit on NBC, with reigning champion Herb Stempel (John Turturro) correctly answering every question that comes his way. But the show’s sponsor, Geritol, is worried: Stempel’s ratings are at a plateau, and they feel the show needs a new champion. So producers Dan Enright (David Paymer) and Albert Freedman (Hank Azaria) look to recruit the sort of face of Twenty-One the sponsors want – and find him in clean-cut, Ivy league, charming Columbia League instructor (or “Professor” as they insist on calling him - and Van Doren's move from reminding him he hasn't qualified for that title, to happily accepting it is telling in itself) Charles Van Doren (Ralph Fiennes).

They offer Van Doren the chance to win the show by telling him the answers in advance, while offering Stempel a career in television if he will agree to throw the next edition of the programme. Both men are plagued with indecision, but Stempel throws the game and Van Doren provides the correct answer to his final question – the exact same question he had been asked at his audition. Van Doren, seduced by the fame, quickly agrees to be given the answers in advance of the show, but the unreliable Stemple is dropped by NBC and instigates Grand Jury proceedings. The records are sealed but this piques the interest of Congressional lawyer Richard Goodwin (Rob Morrow), who begins to see the potential to “put television on trial” – while being deeply conflicted by his growing friendship with Van Doren, keen to be seen as co-operating with any investigation.

Quiz Show remains Redford’s finest directorial achievement by far, a rich, fascinating, beautifully made film with a profoundly rewarding and engrossing reflection on fame, television and the media in 20th-century America. Told at a gentle but compelling pace, probably the strongest weapon in its arsenal is a fantastically literate, well-constructed, dryly amusing and affecting script by Paul Attanasio. Scenes are beautifully assembled, crammed with well observed character beats and wonderfully quotable lines. It’s a script that would stand up extraordinarily well as a play itself, and Redford allows it plenty of room to breathe in his assured, unshowy and perfectly judged direction.

This is a film that analyses exactly how truth and entertainment are supposed to be inter-related. The rigging of quiz shows – and it was systematic across a range of shows on all channels – was a detailed lie to the American people. But, the film asks, what was the real harm of this? What are these quiz shows for? Tests of intellectual attainment or pieces of entertainment for the masses? As Scorsese’s Geritol executive says, people weren’t watching the questions, they were watching the money.

And money is where the villainy lies in this film. For a film rich in period detail, Redford makes clear that there is a definite sense of class that underlies all the action. Decisions are made on the show based on selling things – advertising hours and Geritol products. And there are people in this show – the heads of corporations like NBC – who are making millions out of peddling rigged entertainment shows to the people. And when the chips come crashing down, it’s not these executives who are in the firing lines; it’s the little people who were the face of the enterprise – the contestants themselves – who pay the price. 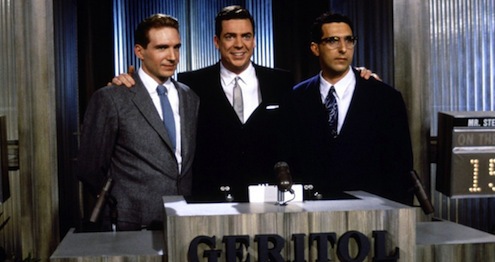 It’s the exact opposite of what Goodwin wishes to achieve when he starts his investigation. He wants to add some moral force, some legislative control, to what you can and cannot present as fact and fiction on television. What he fails to understand – and what the film does – is that deep down people don’t want this. They want the excitement and the thrills – and at the end of the day wouldn’t care less if they never found out everything presented to them was carefully scripted. This lasts today: do we care that comedy sketches are not improvised but carefully scripted? Do we care if game show contestants are carefully pre-selected? Again, as Scorsese’s sponsor representative states, all any investigation will accomplish is TV shows figuring out other ways to get the high ratings: and simpler questions and less erudite competitors will be the way to go.

Because it’s all the glamour and excitement and drama we like to watch, not displays of intellectual accomplishment. It’s something the film understands – and something that comes across very clearly in Ralph Fiennes’ exquisitely well-judged performance as Charles van Doren. A genuinely intelligent, decent man, Fiennes’ performance works so well because he makes clear that under the WASPish, patrician decency of van Doren is a fundamental shallowness, a laziness and hunger for the quick buck and easy success. Constantly, Fiennes’ confident grin and easy manner hide his unease and guilt at his conduct. But he clearly can’t help himself, a Faust wrapped up in his pact.

After all what would his father – the famous poet and academic Mark van Doren, played with a beautiful ease, grace, intelligence and iron-clad honesty by Paul Scofield, a sublime actor at the top of his game – think of this all if he found out? The scenes between the two men – one the proud, loving but quietly demanding father, the other the successful, shallow, quietly desperate son – are the film’s strongest moments, consumed with the tension of the unspoken. We can see the pressure of familial expectations reflected elsewhere in Herb Stempel’s wife’s disappointment at finding that Stempel himself was a coached as much as van Doren.

John Turturro goes larger as Stempel, a bitter and frustrated man addicted to the attention and glamour TV has bought him which he has always felt has been denied him. Stempel’s desire for fame, his assumption of a persona in the public eye which is part studied, part eagerness to please his audience, gets to the heart of TV’s power. It’s the box in every room, and it can turn the ordinary into the extraordinary. It’s a box with the potential to weave magic – and it’s the tricks behind the magic that are difficult to see. For all we know the magician doesn’t saw the assistant in half (as Hank Azaria’s crude producer puts it), it makes it hard to enjoy the trick when you know it is one.

It’s ideas like this that the film gets to  so cleverly, and which turns the American quiz show into an intelligent metaphor for the corrupted ambition of America itself. The dream is to get to the top, and this was a way of offering a short cut for it – and all to help big business sell its products and make money. This is the subversive truth at the heart of Quiz Show, but it’s easy to forget as we, like the American people, have the obvious villains of the ordinary contestants be crucified by the media, rather than those who really profited. Redford’s film is smart enough to constantly remind us of this, to humanise the contestants and to show the darker elements underneath. Quiz Show is a great film.
Email ThisBlogThis!Share to TwitterShare to FacebookShare to Pinterest
Labels: Barry Levinson, Biography, David Paymer, Hank Azaria, John Turturro, Martin Scorsese, Mira Sorvino, Paul Scofield, Ralph Fiennes, Rob Morrow, Robert Redford, Social issues