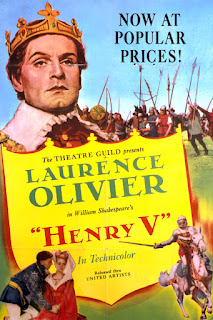 Olivier’s pre-eminence as the leader of the acting profession in Britain for a large chunk of the last century probably found its roots in his imperiously sublime production of Henry V, the first time he directed a film, but also the point where it seemed that Olivier and the country of Britain seemed to be almost one and the same. Filmed as a propaganda piece, heralding the indomitable spirit of the British in the face of foreign wars, Olivier’s film is a triumph that also set the tone for what the public expected from Shakespeare films for decades to come.

Originally Oliver balked at the idea of directing the film, approaching William Wyler to take the job on. But Wyler, rightly, knew he could never bring the Shakespearean understanding to it that Olivier could, so the soon-to-be Sir Laurence took the job on himself – meaning he directed, co-produced, co-adapted and starred in the film. I’m not sure anyone else could have done it – or invested the entire project with such certainty, such confidence, such power of personality that the entire project flies together into a sweeping, brightly technicolour treat of pageantry and theatre.

Olivier’s concept for the film is ingenious – and influential. Taking as its cue the words of the chorus (delivered with a archly bombastic confidence by Leslie Banks), the call to “let your imaginary forces work”, the film is set initially in a genuine Elizabethan era staging of Henry V (including unfortunate rain downpour after the first scene).Slowly, it develops over the course of the film from set to cinematic sound stage (still designed with influence from medieval illustrations) and finally into a realistic location setting for the Battle of Agincourt, before turning heel and repeating the journey back until the film ends again in the Globe theatre, with the actors taking their bow (and the female characters now played by fresh-faced boys). It’s marvellously done, and a neat play on the limitations of both film and theatre, and a testament to the powers that imagination can have to expand the world of what we are presented with.

The style of the play develops as we watch it, becoming more natural and restrained as we get closer to Agincourt, then progressing gently back the other way. The opening scenes play Canterbury and Ely’s long-winded legal argument in favour of war for laughs (with neat comic timing by Felix Aylmer and Robert Helpmann), with an avalanche of papers across the stage, Canterbury frequently lost in his exposition and Ely (and even Henry) having to prompt him with precise points. This is a nice set-up for the comic characters of the play, Falstaff’s old retainers here are the very picture of high-spirited, rowdy common folk (though I must say Robert Newton’s high-energy, gurning Pistol is a bit of a trial, even if it perfectly captures the playing-to-the-cheap-seats mania the role seems to require).

This comic exuberance (and the stuff with Canterbury is genuinely quite funny) gives a perfect counterpoint for Laurence Olivier to perform Henry at his imperious best. Olivier was an actor who invested his Shakespearean delivery with far more naturalism than he is often given credit for, and his Henry here has more than enough true feeling, emotion, determination, courage, bravery and nobility behind his almost sanctified greatness. And of course you get Olivier’s outstanding delivery, that wonderfully rich voice with just a hint of sharpness, delivering the lines not as just poetry, but as true moments of invention. Olivier also has the mastery of the small moments – and Henry doesn’t get much of those – with two particular favourites being the small cough in the wings to clear his throat before entering for his first scene, and that satisfied, exuberant smile at the curtain call at the play’s end. His Henry – the true warrior king of virtue – cemented perception of the character for decades to come.

True, Olivier never touches on Henry’s darker side. Olivier neatly cut anything that could introduce any shades of grey into the character: gone is the summary execution of the traitors at Southampton, cut are the references to naked newborn babes being spitted on pikes before Harfleur, nowhere do you hear the order to execute all prisoners at Agincourt. This is film-making with a purpose, to pushing the message of England, for good, against all.

As a director, Olivier revelled in the possibilities of cinema, marrying it to theatre. For the large speeches, Olivier invariably starts small and close, and then pans sharply and widely out to turn the cinema into a theatre – also allowing the actors (often to be fair, himself) to not feel restrained by the intimacy of the camera, but to deliver the speeches as intended, larger than life and bursting with impact. Olivier’s confidence with the camera is striking, his film a celebration of sweeping shots, of carefully placed tracking shots, of well-delivered acting. The camera work in the Globe is beautifully done, a series of carefully selected angles and shots. The long panning shot over a model of London leading to the Globe that book-ends the film is beautifully done, and the confidence with which Olivier slowly transitions from artifice to reality is superbly well done. 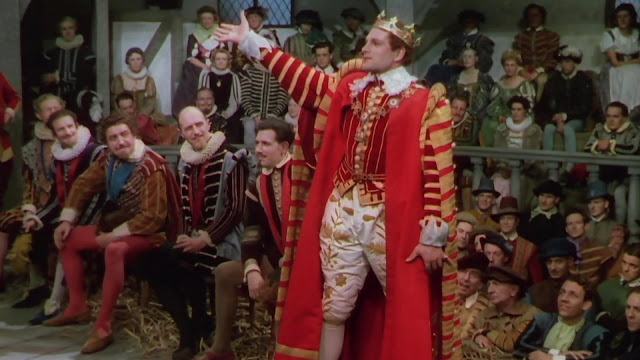 The style of the piece is extraordinary, with its primary colours like a medieval book brought to life. There is some pleasing comic mileage from the French court, reduced almost to a man to being a bunch of camp moral weaklings. The courting of Princess Katherine (Renée Asherson, in a role intended for Vivien Leigh) has a playful charm to it (even if, as in the play, it’s probably a scene too far after the highpoint of Agincourt). But the heart of it is that long build to the campaign, for Agincourt to be brought to life (at huge expense at the time), a beautiful rendering and explosion of reality after the careful artificiality of the rest of the film, as if we really have got our imaginations working and brought it to life before us as the Chorus instructed.

The film established a regular Olivier company that would work with him on films to come. William Walton’s score seems to capture that mood of England at war and believing it was in the right. The cast – plucked from English theatre by Olivier – give striking performances, from Leo Genn’s stern Constable to Max Adrian’s bitter Dauphin, with Esmond Knight’s pernickety Fluellen leading the way for the English. Olivier is of course at the centre as the master conductor, a man who fitted so naturally into the role of leader that he basically seemed ready to take it on for the whole country, never mind just the film. Is there an actor around who was more suited and natural in positions of authority than Olivier? Who was so easily able to inspire and dalliance with genius?

Turning Henry V into a patriotic celebration of England was what was needed, but turning Shakespeare into something that worked on film, that married the theatrical qualities with the cinematic sweep of the camera was exactly what the Bard needed to find a life on screen. Olivier’s daring was to strip down the play and work out what would work on screen and how to make that come to life. Doing so, he defined Shakespeare films for a generation.
Email ThisBlogThis!Share to TwitterShare to FacebookShare to Pinterest
Labels: Ernest Thesiger, Esmond Knight, Felix Aylmer, Harcourt Williams, Historical epics, Laurence Olivier, Leo Genn, Leslie Banks, Renée Asherson, Robert Helpmann, Robert Newton, Shakespeare