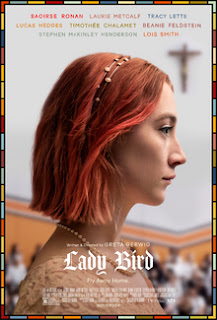 In Sacramento, California, in 2002 Christine “Lady Bird” McPherson (Saoirse Ronan) is a self-consciously assured teenager, constantly pushing to define herself as new and original, down to giving herself a new name (“Lady Bird”) and playfully enjoys pushing against the limits of what is acceptable at her Catholic school. She however butts heads with her mother Marion (Laurie Metcalfe), a hard-working nurse, supporting the family as her husband Larry (Tracy Letts) is unemployed and out-of-step skillswise with the jobs market. Mother and daughter though are strikingly similar people, independent minded but with a streak of loving kindness.

It’s the relationship between these two characters that is the heart of Gerwig’s gently made coming-of-age (of a sort) drama. The key scenes that power the film are both the clashes and moments of fun between these two. There are feuds and angry words – but they often sit-by-side with a loving regard and a shared world perspective. Gerwig gets superb performances from both actors, with Ronan every inch the difficult teenager, full of promise but overwhelming with arrogance and mistakes that constantly hurt those around her. Metcalf is equally good as a woman weighed down with cares, who constantly makes time for others – and therefore finds her daughter’s lapses into selfishness all the more infuriating as they fly in the face of everything she values in life.

The film opens with a fight between these two that just seems to capture the moment. After a long drive to a perspective college, they finish an audiobook of The Grapes of Wrath both overcome with emotion from the stories end. Seconds after it finishes, Lady Bird goes to turn the radio on, her mother asks for a moment of reflection – and we are off from a shared emotional experience into a mother-daughter row. Setting the tone of how many of these will go – and the characters they display in the film – Lady Bird impulsively throws herself out of the car when she feels she is unable to come up with a decent comeback to a point. It’s a plaster cast she will wear for a large part of the film – and an example of the impulsive addiction to terrible decisions that seems to be constantly on the edge of ruining her friendships and chances.

A lot of this material is, to be honest, pretty standard stuff for movies of this genre. And Lady Bird herself is at times a rather irritating and even annoying lead character, one who seems to be constantly hurting people around her with very little regard for their feelings and seems to be continually forgiven regardless. Her treatment of her best friend Julie (a fine performance of endearing sweetness by Beanie Feldstein) sees her drop her and then pick her back up again with a suddenness that feels like it has missed the hurt and pain she has caused.

But then other parts work so well because the script approaches them with a quirky eye for a good joke and a sharp line. There are some very fine jokes among the script, a high point being a PE teacher turned drama director who directs his plays in the exact way he would plan out a football game. Little moments of character observation and behavioural ticks often strike home and frequently raise a smile.

But it also carries across the same observational honesty to less savoury attitudes of being a teenager. The selfishness, the feuding. Lady Bird’s sexual awakening of course happens with a self-obsessed arrogant would-be-poet aiming at a higher plane of intelligence (played with an assured arrogance by Timothée Chalamet). Lady Bird’s striving to constantly to be more or have more than she has always feels very teenager – life can’t just be what she has, she must need or be destined for greater things, or to improve in some way, to make it to the college she wants, to find some deeper meaning, to live a life that expands beyond her horizons and make her stand out.

But, the film suggests, she actually seems destined to become someone more like her mother –decent, kind, gentle, perhaps with a greater artistic calling, but fundamentally a thoughtful person. One early boyfriend – very well played by Lucas Hedges – who is revealed as unsuitable in a way not-at-all surprising when you consider he is the lead actor of the school drama group – is someone she accepts and comforts with a complete emotional openness. Her father’s travails in the job market is something she feels great empathy for. When returning to the company of her friend Julie, she is warm, caring and full of energetic affection.

It makes for a gentle and engaging film – perhaps nothing you haven’t really seen before, but presented with a lot of assurance and freshness by Gerwig, who is a director with an eye for the moving moment (a scene where Tracy Lett’s father sees his son go-up for the same job as him – a job for which the son is more qualified – is unmatched in its sad mix of acceptance and pride) and more than a taste for the eccentric comedy that brings spark to the drama. Powered by two excellent performances by Ronan and Metcalfe, Lady Bird may, like many teenagers, be difficult to like sometimes but has lots of promise.
Email ThisBlogThis!Share to TwitterShare to FacebookShare to Pinterest
Labels: Greta Gerwig, High school drama, Laurie Metcalfe, Lois Smith, Lucas Hedges, Saoirse Ronan, Timothée Chalamet, Tracy Letts