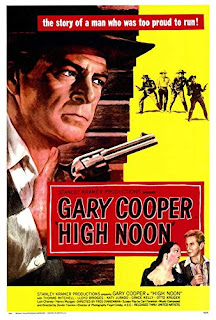 It’s 10:35 am on the day of the wedding of retiring Marshal Will Kane (Gary Cooper) to Quaker Amy Fowler (Grace Kelly). It should be the happiest day of his life – but events are interrupted by news that Frank Miller (Ian MacDonald), a killer Kane put away, has been released and will arrive on the midday train with his gang to kill Kane. Kane’s first instinct – and the town’s – is for Kane to flee the town: but Kane doesn’t want to spend his life looking over his shoulder, and besides his friends and colleagues in the town will stand with him right? He decides to make his stand – to the outrage of his pacifist wife – only to find one-by-one the citizens of the town excuse themselves from helping Kane. After all, who wants to die?

Playing out like a Western 24, Kane has got a little under 90 minutes to put together a posse to give himself a fighting chance against these hardened killers. Zinnemann’s film is full of carefully placed shots of clocks that hammer home the ominous approach of Kane’s seemingly inevitable death. In a brilliant use of contrasts, Kane walks with growing desperation in virtually every shot through the increasingly abandoned town, mixed with clever cut-backs to the Miller gang waiting patiently at the train station (with deep focus shots of the train lines stretching on forever) for Miller to arrive and kick off the killing. Using a wonderful combination of low-angles, tracking shots and one superb crane shot that pulls out and away to show Kane stranded alone in the abandoned town, Zinnemann’s film stresses Kane’s isolation, anxiety and growing desperation.

Because Kane is scared. And why shouldn’t he be? He’s past-his-best and over-the-hill, a long-serving hero on his last day in the job, outmatched by his opponent. Why on earth wouldn’t he be desperate for help? John Wayne and Howard Hawks hated the film, loathed its perceived anti-American-spirit and, most of all, couldn’t stand the idea of a Western hero being scared and desperate for help. They even made a twist on the film, Rio Bravo, where Wayne played a marshal turning down any and all help in order to do what a man needs to do alone. For them that was a Western hero, and this self-doubting, anxious pussy Kane – the man even cries at one point! – was an abomination.

Cooper seemed to be no-one’s choice for the film – Heston, Brando, Fonda, Douglas, Clift and Lancaster all turned it down – but scooped the Oscar as Kane. Then 51, his obvious age and vulnerability – at one point Lloyd Bridges almost beats the crap out of him – make him feel even more at risk from this threat. In a performance devoid of vanity – other than perhaps Kane landing the radiant (and thirty years younger) Grace Kelly as his wife – Cooper is sweaty, nervous, twitchy and a mix of All-American duty and genuine nerves, resentment and terror at what feels almost certain to be his end. Kane knows why he must do it, but to Wayne’s disgust, he still doesn’t like it.

Carl Foreman, the screenwriter, was to be pulled before the House of Un-American Activities for his communist sympathies. And the entire film is pretty clearly a commentary on the McCarthyite era, specifically the abandonment of those pulled before the house by those who seemed to be their friends. Like the blacklisted Hollywood writers and actors, Kane opens the film with admirers and friends all of whom eulogise his greatness and decency: and all of them turn their back on him as the chips go crumbling down.

Most of the film is given over to Kane desperately going from ally to ally, only to find that he is offered only platitudes, excuses and outright cowardice. His deputy demands a recommendation for Kane’s job, and chucks in his star when Kane refuses. Old friends hide in their houses and refuse to come out when Kane comes calling. Lon Chaney Jnr’s retired marshal pleads illness. The judge rides straight out of town and suggests Kane does the same. At a town meeting in the church, the voices calling to help Kane are few and far between, and Mayor Thomas Mitchell praises Kane to the skies, before concluding the town would be better off if he could ride away and not come back. The one man who volunteers backs down when he finds out no one else has volunteered, and the only person eager to fight is a 14 year old boy. 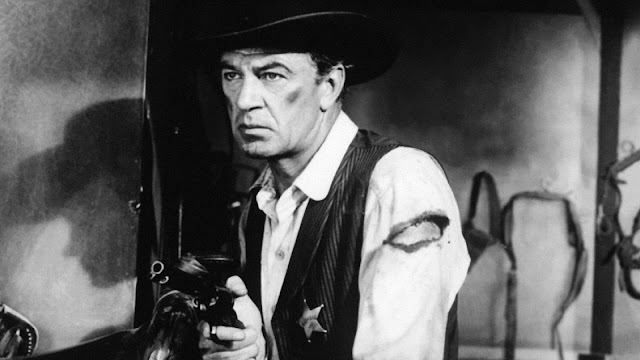 So much for loyalty and the American way. When the chips are down, words mean nothing and it’s the actions that show the man. Customers in the saloon talk about how life wasn’t that bad when the Millers ruled the town (to show how wrong this is, literally their first action when riding into town is to steal something from a milliners). Others moan that all this law enforcement from Kane has actually made business a bit worse for the town. Why do the hard thing, why make the stand, when it’s so much easier to just look down, keep quiet and let the just suffer while your life ticks on.

Cooper’s Kane is masterfully low-key, subtle, using only the slightest gestures to show deep-rooted, only barely hidden resentment and bitterness, covering fear. What he’s doing he’d give anything not to do, but he sees no choice. There is no other Western where the hero writes a will, and quietly weeps with his head on his hands on his desk. There is no other Western where the hero spends so long trying to make a manly task easier to do. There is no other Western where the self-serving cowardice and hypocrisy of the townsfolk are more blatant. No wonder Cooper – in the final insult for Wayne – drops his tin star in the dirt at the film’s end, as the townsfolk rush out to congratulate him on winning the duel. This is a film that looks at America as it really is – and many people didn’t like that one little bit.

Zinnemann’s direction is spot on, a perfect blend of tension build and technical mastery, mixed with superb dialogue from Carl Foreman. Not a word or shot is wasted, and every single character and event is carefully sketched in, established and build up with no effort at all. Cooper is superb, Grace Kelly just as good in a thankless role as the humourless Quaker wife who struggles with her life-long principles against her love for her husband. Beautifully filmed, with a wonderful score with Dimitri Tiomkin, High Noon is a classic for a reason, a masterpiece of slow-build and enlightened social commentary.
Email ThisBlogThis!Share to TwitterShare to FacebookShare to Pinterest
Labels: Fred Zinnemann, Gary Cooper, Grace Kelly, Harry Morgan, Lloyd Bridges, Lon Chaney Jnr, Thomas Mitchell, Westerns