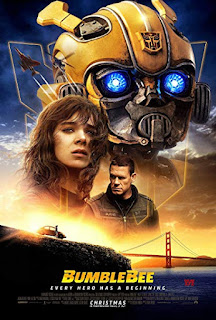 Michael Bay started making Transformers films in 2007. These massive, action-packed, technological marvels are testament to the skill of special effects gurus to create live-action versions of these transforming robots – and a testament to the lack of soul in Michael Bay as the films became increasingly empty, sprawling, noisy, pornographic (not in that sense!), tasteless, sexist efforts that leave a bad taste in the mouth. Bumblebee is a soft-reboot of the franchise – and the very first time it feels like this is a Transformers film that those growing up with the cartoons could recognise, and that you would be happy to show to kids.

In 1987, Cybertron has fallen and the Autobots have scattered across the galaxy. Young Bumblebee (voiced by Dylan O’Brien) is sent to Earth, where he loses his voice, his memory and nearly his life combating a Decepticon. Taking refuge as a beat up Volkswagen Beetle, Bumblebee is found by Charlie Watson (Hailee Steinfeld) a young car mechanic enthusiast mourning the sudden death of his father and struggling with her mother (Sally Watson) starting to move on with a new boyfriend Ron (Stephen Schneider). While Charlie and Bumblebee bond, more Decepticons – on the hunt for Bumblebee who they hope can lead them to Optimus Prime – arrive on Earth and join forces with anti-Transformer agency Sector 7, represented by Colonel Jack Burns (John Cena), to track Bumblebee down.

Travis Knight came to the film from directing several successful animation films – and his understanding of the nuances of inflection and character that you need in order to bond with animated characters. He also brings back an innocence, a dignity and a sense of honour to the franchise. Where the Autobots in past films had increasingly become brash blowhards or brutal warriors (not least Optimus Prime who seemed to become more psychotic as the series went on) this film made them again the noble defenders of the weak that they were in the comics and cartoons. It’s not an exaggeration to say if the fans were waiting for a film that got closer to the spirit of the original, they had been waiting for this one.

Knight’s mastery of animation makes Bumblebee a true character, an endearing, bumbling (sorry), accident-prone, scared little kid who is also a tender, caring and understanding friend. With Bumblebee mute for most of the film, the character communicates solely through his body language – and his hugely expressive eyes – and Knight has redesigned the character to have a larger, more open face that immediately makes him a warmer character. Knight also has a brilliant line in visual comedy, with Bumblebee hilariously trashing a house at one point in a stumbling display of silent comedy that works extremely well.

It also helps that Knight has such a strong, marvellous performance from Hailee Steinfeld as Bumblebee’s carer and protector. Seeing Steinfeld in this film is a real reminder of what brash, very male, figures Shia LaBeouf and Mark Wahlberg cut in the past few films, where women were even objects of tasteless ogling or rebellious kids to be protected by men. All that is thrown out of the window here (thank goodness), with this being the first film in the series written by a woman, Christina Hodson. Steinfeld is allowed to develop a character who is not a Tomboy, a hot scientist or a teenage girl stereotype, but someone who feels very real and hugely charming. Steinfeld brilliantly creates a bond with Bumblebee – no mean feat for a creature that is not there – and the film hinges perfectly on her growing emergence from the shell of trauma and loss at the death of her father, through finding a new purpose with Bumblebee. It’s a great performance anchoring a film full of special effects.

Knight’s film can still handle all the action you want – but unlike with Bay, where spectacle and violence is always considered way more important than story and character, his action scenes are shot with a simpleness and clarity that put character at the forefront. In fact character is what every scene is about, not the shattering punching and tastelessly sadistic, pornographic violence of robotic dismemberment that Bay’s film’s degenerated into. This is a film which feels inspired by the vibe of ET, about two damaged souls who come together to protect each other and find themselves. It’s a film that is about friendship and affection, and Knight’s action scenes carry a sense of these qualities, this desire to protect people, into them.

With the film’s light comic touch – not least from John Cena who is on good form as a Colonel with a grudge against all Transformers (“They literally call themselves Decepticons. That doesn’t set off any red flags?”) and Jorge Lendeborg Jnr, very endearing as Charlie’s would-be love interest – it feels like a film genuinely made by people who loved the original and loved it’s innocent, good-vs-bad themes. Knight also returns the design of the characters back far closer to the look of the 1980s – the opening on Cybertron, with all the characters appearing as souped up versions of their 1980s cartoon form is virtually a love letter to anyone who grew up watching these characters. Knight not only gets the visuals right, with a warmth and depth of character none of the rest of the films have had, he also understands the bravery and heroism of the Autobots in a way Bay never did – Knight’s Optimus Prime is a million miles from the prisoner-executing loonie Bay created.

Bumblebee for sure is no Citizen Kane (although it has lashings of Spielberg in it, not least ET). But it’s on a different planet to the rest of the series, and a film with tonnes in it to enjoy. With its careful balancing of themes from loss to survivor guilt it also has more to it than meets the eye.
Email ThisBlogThis!Share to TwitterShare to FacebookShare to Pinterest
Labels: Action Films, Angela Bassett, Hailee Steinfeld, John Cena, John Ortiz, Justin Theroux, Len Cariou, Transformers, Travis Knight