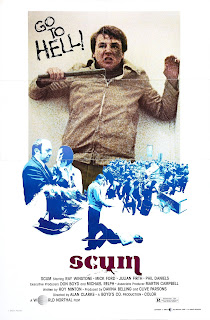 In 1977 Alan Clarke’s searing condemnation of the borstal system in the UK, Scum, was shot as a BBC Play for Today. Outraged at its content, pressure in the press led to the film being banned. But that didn’t change what an electric bit of work it was – and when talk turned to creating a film version, having a filmed version of the script already in existence that could be used as a pitch tool was invaluable. So was born the film version of Scum, with much of the same cast, a higher budget (although still tiny by comparison to other films) and a chance for Clarke to bring his uncompromisingly harsh vision to the big screen.

Three young boys arrive at a borstal: Davis (Julian Firth) is a sensitive youngster who ran away from his previous borstal, Angel (Alrick Riley) a black kid who suffers the systemic racism at every level of the system and Carlin (Ray Winstone) a hard man with a dangerous reputation, who punched a warden at his last borstal. On arrival, the three are identified as requiring being “broken” by staff: Davis is bullied, Angel abused and Carlin is placed at the mercy of the wing’s “Daddy” Banks (John Blundell), suffering beatings with the authorities turning a blind eye. The entire system is rotten to the core and, while Carlin eventually rises up to take over the position of “Daddy”, it changes little in a young offender’s prison rife with racism, sadism, violence, abuse and rape.

Scum is almost unbelievably grim and pessimistic for this system of incarceration, finding nothing to redeem or excuse the system across its entire running time. The borstal is a wintery hell on Earth, with justice and sympathy nowhere to be seen. While the system claims to be helping its inmates (aged from early teens to early twenties) to find new skills and purpose in life, its real function seems to be trying to beat discipline and subservience into its inmates by all means necessary. While the Governor (a silkly patrician Peter Howell) may talk faith, duty and country he oversees a system where the wardens ruthlessly beat the inmates, encourage them to ‘discipline’ each other, turn a blind eye to violence and abuse, encourage an atmosphere of racial loathing and generally show no concern or interest in any boy’s problem that can’t be solved without punching them in the mouth.

It’s a world Carlin is dropped into, and he knows it well. Played by Ray Winstone with a chippy anger that never seems that far from bursting to the surface, Carlin might want at first to keep his head down but quickly accepts the only way to survive in this dog-eat-dog world is to be the top dog. There will certainly be no justice from the wardens, who beat him on arrival as a trouble-maker, and set the Wing’s alphas on him to break his spirit. Casually beaten in the middle of the night, it’s the bruised Carlin who is sent to solitary confinement for fighting while his attackers go free. He is joined by Davis, framed for theft and Angel, for whom being black seems to be crime enough (walloped by a warden, and spilling food across his room, he is sent down for keeping his cell untidy). 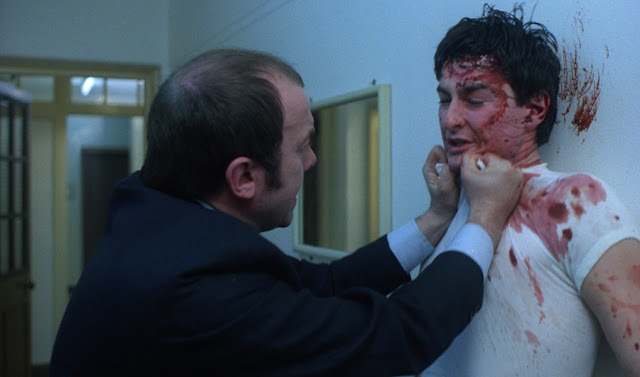 What’s striking in this film though is that, as much as we are meant to think Carlin might be the hero, Clarke is smarter than that. He carefully watches Carlin – a tight-control on Winstone’s face that promises retributive violence is on the way – for almost forty minutes adjust in this system, before he takes matters into his hand. The film’s most famous sequence – shot in one dizzying tracking shot that captures the immediacy of Carlin’s putsch – sees Carlin beat Bank’s weasily sidekick Richards (Phil Daniels) with two snooker balls in a sock, before heading up to his dormitory toilet to beat Banks black-and-blue (and bloody), the cut finally coming to show us Carlin (from Banks POV) screaming at him “I’m the Daddy now”. It’s a masterclass of a sequence, electric in its execution and gives a moment of pleasing oomph (for all its extreme violence) as it shows Carlin finally getting a bit of justice.

Only Carlin’s institution as the Daddy brings largely only a change of figurehead rather than real change. Sure Carlin isn’t quite the bully Banks is, but he’s an unashamed racist, a violent thug, who ruthlessly takes over the money smuggling operation Banks was running (but taking a higher cut) and takes control of another wing by beating its “Daddy” (another black inmate) with an iron bar. Carlin is also quickly adopted by the wardens, just as Banks was, agreeing to maintain peace and control in the borstal in exchange for certain privileges like his own room. Carlin may at first seem to us the angel of retribution – but he’s really a ruthless survivor who is perfectly happy with the status quo so long as he on the top of it.

But then no one has any interest in improving things. The governor is only interested in the appearance of gentility. The wardens couldn’t care less about the rehabilitation of the inmates so long as they have a quiet life. The inmates drift through their life there, never questioning the violence around them. The matron is well-being, but hopelessly rules-bound, whose concern for the boy’s welfare never develops into seeing them as human beings. It’s a systemic failure. 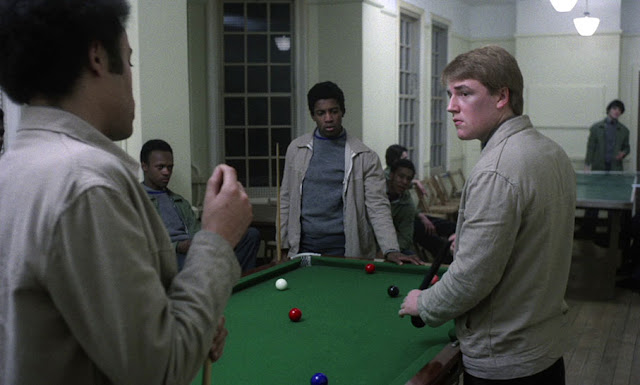 There are other perspectives of course. Possibly the most fascinating character is Mick Ford (replacing David Threlfall in the original production) as Archer, a precociously intelligent inmate in his early twenties, possibly the only one who has read the rulebooks and enjoys running intellectual rings around the wardens. Causing trouble in his “own little way”, he claims to be a vegetarian (requiring a complex set of arrangements to be put in place to feed him separately) and also unable to wear leather boots (requiring his own special plastic boots to be located) and provokes the bible-bashing Governor with thoughts of converting to Islam and Sikhism.

But he’s also a smart cookie, who recognises (in a fascinating conversation with veteran warder Dukes) that the entire system is a trap, both for the inmates and the wardens, imprisoning them in a system where criminal acts are endemic, the wardens are trapped and brutalised by the system as much as the prisoners and the whole system manifestly fails to do anything other than inoculate Darwinian violence into its inmates (Archer is of course promptly put on report for this cutting analysis). The scene – a key part of the film’s argument – is also a tribute to the skilful writing of Roy Minton, whose script bubbles with both quotable and sadly realistic dialogue.

Clarke’s entire film is the exploration of this violence and the mixture of hypocrisy and denial down to outward condonation and support it receives from the Governor down to the wardens. Any proper review of the conditions in the Borstal is impossible, as it would rock the boat and fly in the face of the positive message the Governor wishes to promote about his institution. Effort is put into putting the boys at loggerheads with each other (usually on racial grounds) as a divide and rule. The weak are happily left at the bottom of the rung, not least the tragic Davis, a sensitive boy (marvellously played by Julian Firth with a heartbreaking vulnerability) totally failed by everyone around him.

Clarke’s final act spins out of a disturbingly intense rape scene of a young inmate (an act witnessed with a sneer by sinister warden Sands, a repulsive John Judd) – the scene a mix of careful filming to show nothing too graphic, and heart-rendering intensity in its vulnerability and violence. The victim is totally ignored, leading to tragic consequences – another difficult to watch scene which hammers home both the cruel indifference of the warders and the helplessness of the victim. The eventual riot this is all leading too is, however, painfully futile: scapegoats are selected at random and beaten senseless, the status quo is reinforced by a bland platitude speech from the Governor.

Directed with fire and passion by Alan Clarke, a virtuoso of realism and master of social conscious, Scum is a masterpiece of anger, of boiling resentment against systems that do not work and do not care that they do not work. Packed with astonishing performances and some sublime camera work and film-making skill, it’s a must-see.
Email ThisBlogThis!Share to TwitterShare to FacebookShare to Pinterest
Labels: Alan Clarke, British Films, Mick Ford, Phil Daniels, Prison drama, Ray Winstone, Social issues