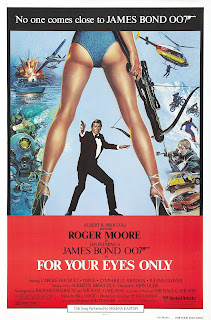 Where could Bond go after he went to space in Moonraker? Another planet? The future? The producers of Bond decided they couldn’t top that – probably wisely – so for Bond’s next outing they went back to low-key basics. For Your Eyes Only Bond would find himself in an old-school Cold-war game of cross and counter-cross, scrambling for the Russians for ownership of what looks like a cross between a typewriter and child’s cash till toy.

That toy is the ATAC (though it might as well be called MCGUFFIN) a ministry of defence system used to co-ordinate nuclear subs or some such. When the ship it’s on sinks somewhere off the coast of Greece, MI6 and the KGB swing into gear to be the first claim it from the Ocean depths. So Bond is off to Greece to investigate, not knowing who to trust: should it be MI6 contact and shipping magnet Kristatos (Julian Glover) or playboy smuggler and former resistance man Columbo (Topol)? And how will he deal with Melina Havelock (Carole Bouquet), the long-haired, half-Greek archer intent on revenge on whoever ordered her parents killed while they (without her knowledge) searched for the ATAC? Either way it will involve chases, deadly winter sports, flirtatious teenage ice skaters and a death defying climb up to a monastery at the top of a mountain.

For Your Eyes Only is one of those quiet gems of Bond movies that, because it is about something quite small scale and quiet compared to the films it precedes often gets overlooked. It’s certainly the point where Moore should have stopped making the films – when your turning down the advances of someone because she’s too young (as he does ice skater Bibi) you know it’s time to go – and to be honest Moore was flagging already here, clearly too old for the action and certainly far too old for Carole Bouquet, who looks like she could have him for breakfast (she struggles to muster much sexual interest in him). But it doesn’t really matter because this is an old-school bit of spy cool, mixed with some decent but grounded fights and chases and shot with a loving eye for Switzerland and Greece (with plenty of clichéd visuals and sound cues thrown in from both as you would expect).

The producers wanted to shy away from the gadget filled antics of the previous films. As if to make the point, Bond’s car is destroyed almost immediately, forcing him to make a getaway at one point in a bashed up Citroen 2CV. The long sequence in the film where Bond is chased around a ski resort – which takes in cross-country skiing, a ski jump, a toboggan and several other winter sports is remarkable for nary a gadget in sight, with Bond relying on his wits and native skill with skis. Even when ascending the mountain at the film’s end, he uses nothing more than standard climbing equipment, putting his trust in ropes and hooks. It’s possibly the least tech heavy Bond film since Doctor No. There isn’t even a novelty watch and no humorous Q briefing on the gadgets. The only visit to Q’s lab is to use a cumbersome facial recognition system, that hilariously uses computer disks the size of stone slabs loaded into something that today resembles a dishwasher.

Other than that Bond is on his own, and it’s fairly neat to see him go about an investigation and follow a trail – even if Bond is, as usual, a hopeless undercover agent who largely relies on waiting to see who tries to kill him first. The villains, as always oblige, spending most of the film attempting to off Bond for all sorts of confused ill-defined reasons. Perhaps it has something to do with our main villain – the rather low-key Julian Glover, playing possibly the least colourful Bond villain ever, a guy who just wants to sell the ATAC for some cold hard cash – using so many cut outs for his operations, speechless goons (including an early appearance from Charles Dance) and East German skiing champions who seem motivated to kill Bond purely for larks and the evilz.

The first half of the film though is huge fun, watching Bond blunder around the ski resort dodging hits, fighting people, punching out butch hockey players and the like that it hardly matters that most of the plot is pretty inconsequential. When Bond finally stops mucking around in Switzerland and heads to Greece the ATAC is found in about 5 minutes flat (Havelock helpfully left a map with the downed boat coloured in on it, making his daughter’s ability to translate his cryptic notes pretty much useless), while the villain immediately takes this chance to comprehensively unmask himself.

After a further elaborately sadistic attempt to off Bond involving dragging him across coral in shark infested waters (sharks are always such deadly threats in Bond films), Bond unites with Topol to storm the castle in an actually pretty gripping and vertigo inducing climb sequence, another triumph of John Glen’s mastery of the action sequence. It’s a nice touch as well to introduce the “guest star” of the film not as the antagonist but as a protagonist ally, a neat twist that must have come as quite a shock back in the day. Topol plays his role with realish, cracking nuts, gags and heads with equal glee.

The film also heads into some dark places. For all his charm, gallantry and debonair wit, Moore does his meanest thing in years here when he kicks a heavy’s teetering car off a cliff. But that’s a fair repayment for the brutal running over of his mid-film squeeze (played by Pierce Brosnan’s real life late wife Cassandra Harris) earlier on by the same heavy. The early murder of the Havelock’s is surprisingly graphic (and also gives a great reaction shot for Carole Bouquet as she turns and looks back as the plane carrying her parent’s murderers jets away, her eyes screaming “I shall have my revenge!”) and Carole Bouquet’s Melina is determined figure, who does more than her fair share of the action. 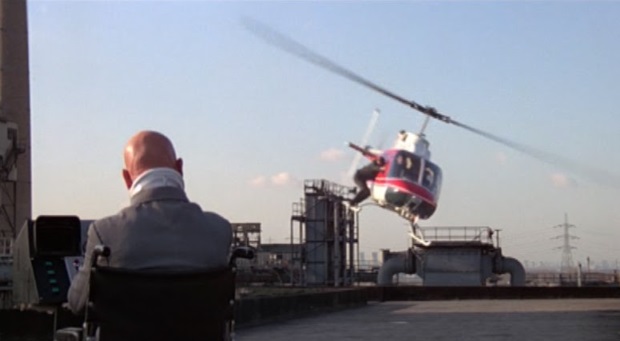 Of course the film can’t endorse too much her need for revenge. “That’s not the way” Bond, like a disapproval uncle, rather prissily tells her several times. Which is a bit rich coming from a man who opens the film by dropping his wife’s murderer down a factory chimney shaft. That opening sequence by the way is a joy, a neat call back to On Her Majesty’s Secret Service (whenever Bond went serious, it referenced Bond’s status as a widower) as well as a the dispatching of a it-could-be-anyone bald, scared, cackling villain with a white cat who makes an ill-advised attempt to kill Bond with a remote controlled helicopter (the film is so anti-Gadgets, only the baddies seem to use them and they don’t even work for them). It’s a neat “fuck you” to Kevin McCloy, at that time in a feud with the producers over the rights to Bond who had refused to allow them to use Blofield or Spectre again in the films. Keen to show they didn’t need Blofield, the producers introduced him in all but name to ignominiously kill him off, his final pathetic words a hilariously meaningless offer to buy Bond a “delicatessen in stainless steel” if only Bond would let him go.

FYEO is a crackingly old-fashioned Bond film that, despite being more grounded, has some great action sequences and a host of actors having a good time. Carole Bouquet is one of Moore’s best Bond girls and Moore himself certainly should have stopped here, this film throwing together one of his best mixes of light comedy, moral uprightedness, playfulness mixed with a dash of cruelty. John Glen did such a good job assembling this one he directed the next four films. It’s not got the smash-and-grab of The Spy Who Loved Me, but it’s an excellent action adventure.
Email ThisBlogThis!Share to TwitterShare to FacebookShare to Pinterest
Labels: Action Films, Carole Bouquet, Charles Dance, James Bond, John Glen, Julian Glover, Roger Moore, Spy thrillers, Topol