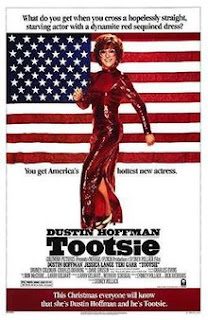 It sounds like a movie idea from hell: “We’ll get Dustin Hoffman to play a struggling actor who can only get a job when he dresses as a middle-aged woman and auditions for a daytime soap. Hilarious misunderstandings will follow…” But you’d be wrong: Tootsie is an absolute delight: not only a wonderful comedy, but a touching love story and an acute commentary on sexism and the compromises women are forced to make to get the same opportunities as men. It’s a wonderful, smart, thought-provoking film.

In a role that draws on more than a little self-parody, Dustin Hoffman plays Michael Dorsey, a dedicated, demanding, difficult actor who has alienated so many people across Broadway and Hollywood with his unwillingness to compromise that he can’t land a job. When his friend Sandy (Teri Garr) flunks an audition on a General Hospital-style daytime soap, Michael thinks “what the hell” and puts himself forward for the role under the disguise of the middle-aged “Dorothy Michaels”. Surprisingly he finds he lands the job: and realises that women’s lot on the masculine film-set is not a happy one, evading sexual approaches, treated like idiots and generally encouraged to not pipe up. Intelligent, clever fellow-cast member Julie Nichols (Jessica Lange) hides her light under a bushel. At first Michael enjoys the respect he wins, but as Dorothy increasingly becomes a feminist icon he’s plagued with guilt at the lies and deceptions he’s practising.

It’s the sort of idea that should be either patronising today (a man learns about feminism by walking in a woman’s shoes!) or inadvertently toe-curling. The fact that it isn’t (and I’ve watched this film with women who have enjoyed it a great deal, so I’m not completely guessing here!) is a tribute to the film’s lightness of touch, combined with a neat sense of the ridiculous, along with the emotional truth and genuineness that the film is handled with. It neither preaches nor mocks but simply focuses on telling the story and allowing us to draw our own conclusions. It also has a script packed through with some absolutely cracking jokes, all of which are delivered straight.

Central to its success is Dustin Hoffman, who plays the entire role completely straight. His Michael is a neat self-parody in his abrasive difficulty – but he’s also shown to be a concerned and genuine friend to Teri Garr’s delightfully ditzy Sandy, urging her to have more confidence (little realising how difficult it is for women to impress male casting directors if they behave with the confidence of men). Sure he’s not above clumsy passes to women at parties, but he’s no dinosaur or sexist. And becoming Dorothy Michaels is an opportunist moment of eagerness to show he has range and can get work if severed from his terrible reputation, rather than having any cruel or mocking motivations. 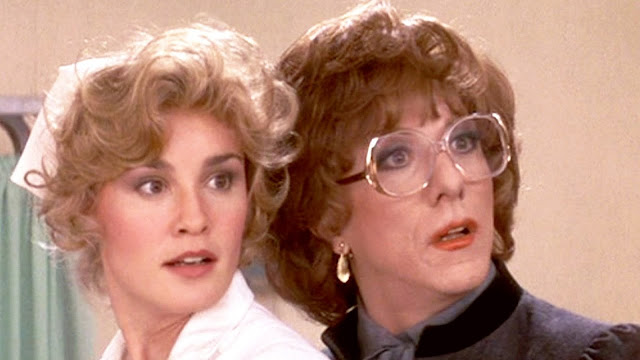 And what Hoffman does so well here is that Dorothy becomes her own personality. And that Michael immediately recognises that Dorothy, with her assurance, her kindness, her unwillingness to take nonsense, but her serene confidence, is a much better person than he is. She refuses to be trapped into either of the two roles the director intends for her (love interest or shrew) but insists her role in the hospital soap be treated like a dedicated professional, not defined by her sex – which makes her exactly the sort of role-model women around her (and eventually across America) have yearned for. Somehow as well, the film gets us to invest in what a great person Dorothy is, even as we know it’s really Michael in disguise – and Hoffman never, ever plays the part for laughs.

The casting allows the film to get a number of hilarious shots at the fast-paced, poorly-written, cheaply sexist nonsense that goes into daytime soaps. The director of the show is a roving lothario (played with all the smarm at his command by Dabney Coleman), who opposes Dorothy’s casting because she is not attractive enough, talks over the women in the cast and expects affairs as part of his salary. The show’s leading man is an aged actor (played with an oblivious sweetness by George Gaynes) who expects to kiss every woman in the show and is totally unable to learn lines. The plots of the soap are a joke, and the actresses are frequently placed into demeaning situations that real nurses and administrators (the only roles of course women can play in a hospital!) would never do.

Becoming horrified by this, Dorothy/Michael encourages the other women in the cast to break out from this – not least Julie Nichols, beautifully played by Jessica Lange as an intelligent, sensitive woman forced into pretending to be an airhead so as not to disturb the men around her. Lange is superb in this role, and so radiant that of course Dorothy/Michael finds himself falling in love with her – a complexity that constantly intrudes on the sisterly bond that Julie increasingly feels for Dorothy…

And that’s another source of guilt for Michael, who is (despite it all) a good guy, and slowly works out that there is no way of extracting himself from all this without hurting people’s feelings (not least when Julie’s sweetly charming widowed dad – played wonderfully by Charles Durning – starts to have feelings for Dorothy). Michael doesn’t want to hurt anyone – not even Sandy, with whom he finds himself stumbling into a one-night stand that he can’t work out how to reverse out of because he’s so desperate not to damage their friendship (something that he of course ends up damaging anyway). It’s a film that brilliantly balances these personal struggles with wider pictures. 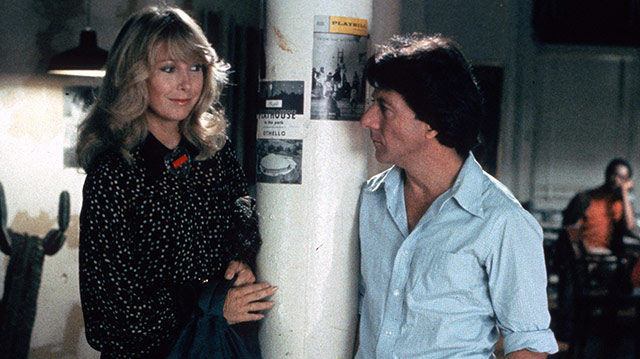 Because, as Michael is aware, he’s himself guilty of using women by stealing the cause of feminism by pretending to be a woman. He’s perpetrating a con on the whole of America, and can’t work out a way to back out. The solution he does finally find is a comic tour-de-force – while finding time to still focus later on the real, emotional impact on those who have come closest to Dorothy – and gently indicates how lives can move on.

Sydney Pollack has probably never directed a film as smart, touching and wise as this one (he also puts in a hilarious cameo as Michael’s frustrated agent). It’s a film that could have been just a comedy about a man in drag, but in fact ends up raising profound issues about sexism, feminism and relationships that still feel relevant today. It’s almost certainly Hoffman’s greatest performance – honestly, he’s sublime here, it’s a once in a lifetime performance – and there is barely a wrong beat in it. The cast fall on the great script with relish – Garr was never better and Bill Murray has a superb unbilled supporting role as Michael’s acerbic, playwright housemate. You’ll laugh, you’ll cry, you’ll think and you’ll want to watch it again. Can’t say better than that.
Email ThisBlogThis!Share to TwitterShare to FacebookShare to Pinterest
Labels: Bill Murray, Charles Durning, Comedy, Dabney Coleman, Dustin Hoffman, Geena Davis, Jessica Lange, Social issues, Sydney Pollack, Teri Garr