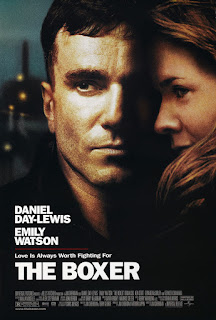 Daniel Day-Lewis and Jim Sheridan collaborated before this on the stirring, passionate and angry In the Name of the Father, a film that acutely analysed the impact of the Troubles on ordinary people. That film was about a miscarriage of justice that ruined lives. This film tries to cover similar ground, but somehow the force of the narrative never really comes together as much as it should

The Boxer himself Danny Flynn (Daniel Day-Lewis) is released from prison after 14 years, due to his peripheral involvement with the IRA. He’s guilty for sure, but has played the game inside and refused to name names. He comes out still in love with Maggie (Emily Watson) – but she is married to another man currently in prison (putting her out of bounds by the code pushed by the IRA). Making things more complex, her father Joe (Brian Cox) is a leading IRA man currently part of negotiations with the British government. Danny and his former trainer Ike (Ken Stott), now a struggling alcoholic, decide to reopen the local boxing gym, making it a denomination free facility for all the community. But their efforts to try and build bridges are not welcomed by all – not least local IRA enforcer Harry (Gerard McSorley) who makes it his mission to destroy Danny.

Why does The Boxer not work as well it should do? It’s got nothing to do with the commitment of the cast, all of whom offer excellent performances. Day-Lewis, inevitably, spent almost three years in preparation learning to be a boxer. It’s just a shame that the script doesn’t really give anyone here something interesting to play with. Instead it makes fairly familiar points about the dangers when we let hatred govern our lives, and carefully sorts and packages most of its characters into goodies and baddies, while making sure in every single scene we are always told exactly what we should be thinking and feeling.

It’s a flaw that I’ve often found in other of Sheridan’s films. He’s a passionate but rather blunt director, full of righteous anger and a determination to make films that carry a social message. But he often makes these points without subtlety or imagination. Here we get an Ireland shot almost completely in a washed-out blue, with the tensions of a community increasingly simplified down into rotten apples playing on the fears and resentments of different groups to continue the spiral of hate.

In the middle of this, Sheridan places a love story between Day-Lewis and Watson’s character that both of them play with a tender commitment and an emotional vulnerability, but which never really invests the audience. It always feels too heavily built on cinematic contrivance – with its long separation, new relationships and social obstacles put in the way. Much as Day-Lewis and Watson give it their all, they never manage to make it feel anything other than it is – a rather tired “movie” love story, that moves it characters through familiar beats.

More interesting than this by far are the real tensions in a community that is tired of violence and wants to move on, but keeps on getting dragged back into old ways because there is simply too much history to overcome. The most interesting character by far is Brian Cox’s IRA bigwig, a man carrying a burden of blood from the past but has an actual desire to see the country change. A film about a man like this, trying to walk a tightrope between negotiations with the British and keeping his own furious foot-soldiers in line (when all they want to do is to bomb something) would have carried real impact. Sadly, it’s too often relegated to the margins of the story while the film follows the immediate social impact of Danny trying to find a third way between war and surrender.

Peaceful co-operation is what Danny wants, and the gym for all people in the Belfast community is how he intends to go about it. Boxing itself is peripheral to the film – what really matters is that idea of bringing people together, of giving them something they can all own and feel some pride in. It’s an idea that Ike believes in above all things, and the prospect of recreating it with Danny’s release from prison gives his life real meaning (Ken Stott is very good as a character who is something of a cliché but still carries a real emotional wallop). Ike and Danny’s vision offers the community a possibility of moving on – something some are not ready to take on.

Not least Harry, played by a quietly fuming Gerard McSorley, prowling scenes like a man who can’t wait to hit someone. The film does at time suggest that there are “good” IRA and “bad” IRA chaps (with Harry firmly in the bad), but it does at least show that these extremists are a danger to everyone, not least the people they claim to protect. Harry’s prejudice towards Danny is motivated above all by his fear of Ireland’s way of life changing, and in that way it forms a decent expression of the film’s core message about the difficulty – but essentialness – of moving on.

Sheridan’s film is a cry for hope and opportunity at a difficult time – and its alarming watching it now to remember what a ghastly place Northern Ireland was at this time, when it’s so well known today as the Game of Thrones backlot. It’s just a shame that the story feels like such a – well – story. The film feels like a slightly over-cooked melodrama, and as the character clashes you expect and the twists you can see coming start to work their way into the narrative, it feels like the central story of a man wanting to make a better life for himself and his neighbourhood gets lost in the mix.

And it does. That’s the basic weakness of The Boxer in the end. For all of Day-Lewis’ skill and Watson’s emotional truth, their story just ends up feeling not that important, you feel that the more interesting things are happening on the margins: Cox’s IRA man feels more worthy of a film, while Stott gets some of the most electric moments of emoting. Sheridan’s film has fire in it, but it ends up burning up his main narrative, while the story relies too heavily on melodrama and cliché. Eventually it fizzles out and you end up not feeling as outraged as you should. Where the true story of In the Name of the Father helped control Sheridan’s spoon-feeding tendencies, here the fictional story allows full reign for the sort of narrative twists that end up feeling a little too tired and obvious.
Email ThisBlogThis!Share to TwitterShare to FacebookShare to Pinterest
Labels: Brian Cox, Daniel Day-Lewis, David Hayman, Emily Watson, Gerard McSorley, Irish films, Jim Sheridan, Ken Stott