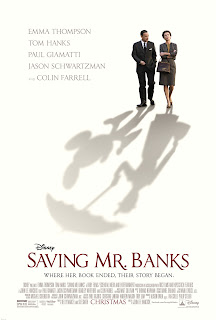 Walt Disney was a man used to getting what he wanted. And what he wanted more than anything was the rights to PL Travers’ Mary Poppins series. It was his kids favourite books, and he had promised them he would make the movie. It took decades – and Disney had to wait until Travers needed the money – but finally a deal was struck, with Travers having full script approval. So the hyper-English Travers is flown across the Atlantic to Los Angeles where she reacts with a brittle horror to every single suggestion from the Mary Poppins creative team, and distaste at the commercialisation of Disney’s enterprise. Based on the actual recordings (which Travers insisted on) from the script meetings, Emma Thompson is the imperious PL Travers and Tom Hanks the avuncular Walt Disney.

John Lee Hancock’s film is a solid crowd pleaser that, if it feels like it hardly delivers a completely true picture of the making of Mary Poppins, does put together an entertaining and interesting idea of the difficult process of creation and the tensions when writers (who don’t want to change a thing!) clash with film production companies. These problems being made worse by the clashing worlds of the loose, casualness and breezy friendliness of Los Angeles, and the intensely cold, buttoned-up Edwardianism of Travers, hostile to all shows of affection and any touches of sentimentality.

The film gets more than a lot of comic mileage out of these mixed worlds, with Travers’ every look of aghast, repressed, British reserve (“Poor AA Milne” she mutters while manhandingly a stuffed Winnie-the-Pooh toy out of her way, followed by “You can stay there until you learn the art of subtlety” as she dumps a massive Mickey Mouse cuddily toy against the wall of her bedroom) bound to raise sniggers at both her blunt hostility and cut-glass wit. Against this the American characters – all of them forced to dance to her tune – meet wave after wave of hostility with a practised American friendliness and warmth. It works a treat.

The film walks a fine line with its portrayal of Disney who is both a charming uncle figure and also a savvy and even ruthless businessman. Tom Hanks is spot-on with showing both sides of this man, making it clear how he managed to make so much damn money but also from how he managed to inspire such loyalty from many of his staff. Yes the film soft-peddles on many of Disney’s negatives – from refusing to show a single second of Disney smoking, to no mention of his active union-busting activities – but this is a film focused on Disney the impresario and negotiator.

And what a person to negotiate with! That the film works is almost exclusively down to Emma Thompson’s imperious performance in the lead role. Thompson has a very difficult job here of turning someone so consistently rude, aggressive, arrogant and unpleasant as Travers (and over half of the film goes by before she says something nice to anyone) into a character we genuinely invest in, care about and laugh with as much as gasp at her rudeness. It’s a real trick from Thompson, adding a great deal if inner pain and vulnerability just below the surface, but only allowing a few beats of letting these feelings out for all the world to see. It makes for a performance that is superbly funny, hugely rude but also someone we end up caring about.

A lot of that spins from the careful recreation of Travers’ past in flashback, particularly her relationship with her father, Travers Goff (played with charm by Colin Farrell), an alcoholic bank manager in Australia when Travers was a child, who lived a life of irresponsibility mixed with bursts of playful, imaginative games with his daughter. It’s the realisation, by the elderly Travers, that her father was feckless and irresponsible that motivates her writing of Mary Poppins, the super-Nanny who flies in and saves not just the whole family, but specifically the father. Equally good in these sequences is Ruth Wilson as the despairing Mrs Goff.

It adds a sadness to the backstory of Travers – and an understanding of why she behaves the way she does – and the film also brings it round to a neat mutual meeting ground between her and Disney, who himself had problems with a father who drove him hard to achieve. It also explains Travers’ growing warmth to her chauffer, played by Paul Giamatti as a loving dad, the one person she demonstrates some affection to within the film.

It’s a film that wants to have its cake and eat it though, and it can’t resist adding a “happy ending” to the story of Travers finally accepting (even if she denies it) that she enjoys the Mary Poppins film and is moved by the saving of Mr Banks that it contains. In reality of course, Travers hated the film (though claimed some of it was passable) and refused Disney all permission to ever make any sequel. But that hardly matters here, to this fairy tale of saved souls which wants to see Travers saved – even if the truth was far more complex.
Email ThisBlogThis!Share to TwitterShare to FacebookShare to Pinterest
Labels: BJ Novak, Bradley Whitford, Colin Farrell, Emma Thompson, Jason Schwartzman, John Lee Hancock, Kathy Baker, Paul Giamatti, Rachael Griffiths, Ruth Wilson, Tom Hanks, Walt Disney