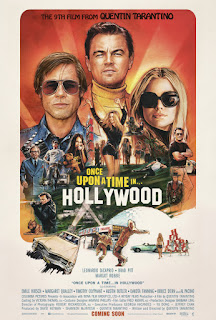 Spoilers: I’ll discuss the film’s final 40 minutes in detail. I mean when you watch it you can guess where it’s going. But those final moments are truly central to my visceral hatred of this film.

There seems to be three eras of Tarantino movies. The first (Reservoir Dogs, Pulp Fiction and Jackie Brown) saw him work with pulpy themes focused on strong stories and character development. The second (Kill Bill and Grindhouse) saw him indulge his fascination with the B-movie and low-rent TV of his childhood. His third (Inglorious Basterds, Django Unchained) sees him making strange revenge fantasies on behalf of other groups. Once Upon a Time is a marriage between his second and third eras. And I hated it. I hated, hated, hated, hated it. I genuinely can’t remember seeing a film I hated more at the cinema (maybe Transformers: Revenge of the Fallen). It’s a self-indulgent, tasteless, overlong, smug, unbearable pile of pleased with itself shit. It’s grotesque and it left me feeling dirty.

The plot (such as it is) follows three days in the lives of fictional Hollywood-turned-TV actor Rick Dalton (Leonardo DiCaprio) and his stunt double Cliff Booth (Brad Pitt), Dalton’s best friend, chauffeur and personal assistant who can’t get a job in Hollywood due to his terrible reputation. Dalton lives next door to Roman Polanski and his wife Sharon Tate (Margot Robbie). On Feb 8th 1969, Dalton is offered a role in spaghetti westerns and preps for his next episodic TV show. On Feb 9th Dalton shoots the pilot of Lancer a new TV western (and a real TV show) as the baddie, suffering a crisis of confidence about his career and talent. Meanwhile Booth does some odd jobs and has an odd encounter with the Manson family. Intercut with this are scenes of Sharon Tate going about her everyday life, including joyfully watching one of her films in the cinema. Finally we join the action after a time jump on August 8th as, after returning from filming in Italy, Dalton and Booth get drunk and high and accidentally waylay the Manson gang on their way to Sharon Tate’s house and – this being now Tarantino’s thing – brutally and bloodily murder the three Manson family killers.

Sigh. I think a question now has to be asked about what Tarantino’s problem is. As I realised where this film was going, my heart sank. This sort of revenge porn is, I’ll be honest, revolting, demeaning, tasteless and, leaving all else aside, not Tarantino’s place. It also demeans and cheapens the actual tragedies that happened to real people. Just as shots of Hitler’s head being machine-gunned to pieces in Inglorious Basterds while Jewish-American paratroopers machine-gunned a room of Nazi’s seemed to be grossly inappropriate, lowered the victims to the level of the killers and cheapened the actual deaths of real people in the Holocaust, making them seem like weak victims (as well as hardly being Tarantino’s place being neither Jewish or having any connection to the Holocaust) so it’s equally tasteless here. He just about gets away with it in Django Unchained, a black revenge thriller from a director who is not black and has littered his scripts with the “n-word” as all these guys were at least fictional people. But here it’s just grotesque.

We pride ourselves now that we have left the Gladiatorial ring behind, or that we no longer gather round on a Bank Holiday weekend to watch a convicted criminal being hung, drawn and quartered. But as I watched the Manson killers being bludgeoned to death, mutilated by a dog, their Glasgow kissed skulls crushed against a mantelpiece and immolated by flame thrower, I thought we’re not that far off. It’s basically a pornographic level of violence, that the film excuses because the Manson killers were bad guys (don’t get me wrong they were) but asking us to take pleasure in killing, is basically what Manson himself asked his followers to do. I find watching this sort of stuff not only feels like it cheapens the actual brutal, tragic murders of an eight-month pregnant Tate and her three friends, but also lowers me the level of the killers themselves. Tarantino’s films increasingly feel like the director himself would be fully on board with that episode of Black Mirror (“White Bear”) – where a killer is tortured everyday by tourists, and then has her mind wiped so she can go through it every single day – being turned into a reality.

In fact Once Upon a Time in Hollywood is a worrying voyage into the man’s soul, and what I saw there was partly this muddled vanity and obsession with revenge (I mean who gives him the right to take revenge on behalf of others? Someone please tell me? There is an arrogance to that I find deeply unattractive), partly the tragically boring geeky tedium of the video-store nerd, mixed with a loving regard for white men and a worrying lack of interest (bordering on contempt) for anyone different. 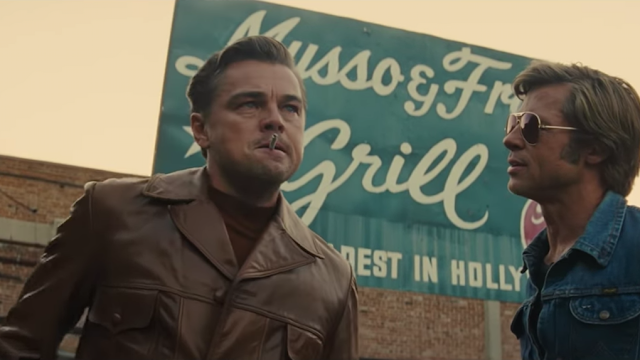 I loathed and despised the final forty minutes of this film, but to be honest the opening two hours are not a lot better. This film is almost three hours long and contains about thirty minutes of plot if that. What it mostly is, is a chance for Tarantino to indulge to a ludicrous degree his obsession with low-rent culture of the 1950s and 1960s. To show off his knowledge of obscure films of the age (he’s heard of The Night They Raided Minsky’s you know…) and recreate in painstaking detail pastiches of the type of TV shows he grew up watching. These sequences seem to go on forever and ever, with the odd good line and decent gag not suddenly making it anything other than increasingly tedious.

What he really, really, really needs is a collaborator to tell him when less is more and certainly when too much is too much. The first two thirds of the film seem to stretch on for an indulgent eternity, and their content reveals more and more of the director’s obsession. White men are idealised and the old-school values of Hollywood, the world of the studio and simpler non-PC times are looked back on with a fussy nostalgia. The film takes every opportunity for Booth and Dalton to lambast hippie culture and the growing anti-establishment of the era, and has every character we meant to like yearning for the good old days.

Bruce Lee appears in the film, here interpreted as a braggart arsehole, showing off to the stunt men, who is humiliated by Cliff in a brawl. It’s a scene that amuses for a second and then makes you uncomfortably realise you are watching the most prominent non-white person in the film being put into his place by a middle-aged white man. It’s got more than a hint of racism to it. And Tarantino claims to be a fan of Bruce Lee! By contrast, while the film brutally murders the Manson killers, James Stacy (played by Timothy Olyphant here) the chiselled white-male star of Lancer, a man later jailed for repeated child molestation, is treated with a laudatory romance. Guess there are different rules for white guys who starred in Tarantino’s favourite shows. Whither the revenge saga where his victims mutilate him eh?

Women don’t get a better deal in this film. Sharon Tate is essentially an elevated extra, although Tarantino gets one lovely sequence out of her watching her latest film – a playful swinging 60s spy caper with Dean Martin – in a cinema and gleefully enjoying both the film and the audience reaction with a childish, delighted grin. But then a lot of the success of this is due to Robbie’s marvellous performance. Tarantino himself does his best to ruin it with his foot fetish, throwing Margot Robbie’s naked feet into virtually every shot. Aside from this, the film shoots and treats Tate like a teenager observing someone they have a crush on, romantically idealising her without ever getting anyway near understanding her or scratching the surface of her personality, instead following her with doe-eyed devotion. 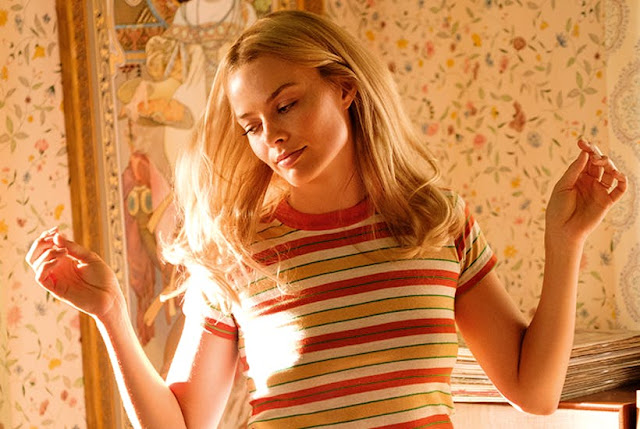 But at least she gets lines. Every other woman in this is either a slut or murderer (or both) from the Manson cult, a shrew (like Booth’s dead wife and Kurt Russell’s stunt manager’s wife) or a bimbo (like Dalton’s eventual Euro-wife). There is no in between. It’s a film for men, written by a man, where the men take centre-stage, and a smugly held up as never doing anything wrong, with the film uncritically indulging their vices as symptoms of their tragedy of being left behind by a more progressive and changing country.

Both Pitt and DiCaprio enjoy swaggering twists on their images. DiCaprio overacts wildly, in an overly mannered performance full of actorly quirks (he has a stammer so we know he’s a sensitive soul deep down!), that riffs on other performances of his and largely involves shouting and swearing. Even scenes of emotional vulnerability carry a method fakeness about them – but then Once Upon a Time is a film with no heart, so it’s not surprising that when one of its characters tries to show one, the film stumbles spectacularly into artificiality. Pitt fares better, with a performance of McQueen like-cool, even if the film seems to believe that even if Cliff did kill his wife (as many believe) it’s fine because she was clearly a bitch.

All of this is shot with a flatness and lack of visual interest that is surprising for Tarantino, usually a much more vibrant director. Maybe he was just echoing the TV styles at the time. Maybe he was saving the fireworks for his orgy of (what he would call) cathartic violence at the end. Maybe it’s just a pretty mundane film. Maybe if Tarantino wasn’t the film-buffs darling, more people would call out his flatness and lack of imagination behind the camera and the soulless flatness of much of the films shooting and pacing. Its mediocrity and smug wallowing in the culture of yesteryear is appalling.

Because Once Upon a Time is a teenager’s film, and worst of all, a teenage bore. It’s got a major crush on Sharon Tate, but barely any interest in her personality. It drones on endlessly about geeky knowledge and old film and television that no one else knows anything about so that it sounds interesting and cool. It takes a childish, immature, sickening delight in fantasising about killing bad people in the most horrific ways it can possible imagine. It thinks it’s really clever and profound, but it’s actually a horrible, horrible film that’s also really tedious and which leaves a deeply unpleasant taste in the mouth, while demeaning the real-life victims of a crime by spinning some ludicrous revenge fantasy around them. It morally offended me after two hours of boring me. I hated it. I hated it. I really, really, really, really hated it. I hated it so very much.
Email ThisBlogThis!Share to TwitterShare to FacebookShare to Pinterest
Labels: Al Pacino, Brad Pitt, Brenda Vaccaro, Bruce Dern, Dakota Fanning, Damian Lewis, Emile Hirsch, Leonardo DiCaprio, Margaret Quailey, Margot Robbie, Quentin Tarantino, Terrible Films, Timothy Olyphant