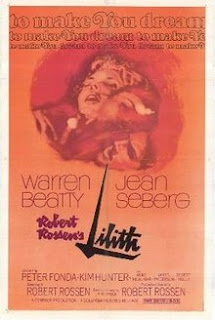 Movies have long had a fascination with mental illness – in particular the impact of mental illness on women. Lilith is an intriguing, elliptical, somewhat cold but intriguing film that looks at the impact isolation, loneliness and seclusion can have on people and how these damaged psyches can sprawl out and cause further pain and suffering for others. However, it’s also a difficult, unclear and occasionally hard to like film, that deliberately clouds so many of its points in a veil of doubt and uncertainty that it’s difficult to really embrace it.

Returning from an undisclosed war (possibly Korea), Vincent Bruce (Warren Beatty), a lonely, slightly troubled young man, drifts into a job as a counsellor at a private mental hospital, under the supervision of Dr Brice (Kim Hunter). Bruce is empathetic and keen to understand and help the patients, but he finds himself slowly drawn towards Lilith Arthur (Jean Seberg), a sensual and seductive patient at the institute. Encouraged to spend more time with Lilith – as only Vincent seems able to draw her out of a fantasy world to engage with the real one – he increasingly finds himself infatuated with her, increasingly bending any personal or professional ethics to fuel his emotional and sexual need for her.

Just in case you are in any doubt from reading that, it’s pretty clear from early on in the film that the real person in need of help is Vincent. Played with a methody introspection and brooding insecurity by Beatty (he impassively and wordlessly drifts through several scenes or merely watches, and only rarely shows any emotional engagement), Vincent is frequently framed by Rossen alone, lost in the centre and sides of frames, or walking seemingly aimlessly forward. The camera often drifts towards him, if only to stress his lack of real engagement with the things he is seeing in front of him. His obsessive qualities are there from the very start, with his fixations switching between his mother, a former girlfriend (played with a flirtatious seductiveness by Jessica Walter) and finally settling, overwhelmingly, on Lilith whom he follows with the glazed eyes of a potential killer. Beatty struggled with the part – and I can see why, as our central character is such a distant cipher that he becomes someone very hard for the audience to invest any interest in.

Lilith herself is an intriguing if, it seems, unknowable character – almost impossible to tell if she is a truly destructive force or someone who simply behaves as she feels in the moment with no understanding of the impact her actions have. She is frequently callous and cruel, and then will revert to sadness, vulnerability and insecurity. She looks for love – or at least affection and loyalty – at every turn, but then also seems unable to understand any personal relationship except through the filter of sex. Starting the film placing an erotic spell around sensitive fellow patient Steve (Peter Fonda, vulnerable and rather sweet) she quickly switches all her efforts to wrapping Vincent in a web of enchantment (as the film rather clumsily stresses to us in a scene where a doctor explicitly compares her to a spider).

Lilith is increasingly seen as an unsettling, indiscriminate figure. No sooner does Vincent become her lover, than she begins flaunting a sexual relationship she is having with another female patient. (Lesbianism was quite radical for a film at the time). Even more surprisingly the patient is a staid, rather imperious middle-aged woman (played imposingly by Anne Meacham), and the relationship seems to be partly conducted to get a rise (of one sort or another) out of Vincent. Earlier, Lilith flirts disturbingly and erotically with a very young child (who seems disturbed) – although the viewer is perhaps even more disturbed by Vincent’s blank watching of the whole scene. At every point we are reminded of Lilith’s erotic allure – and the framing of the film, and its beautiful photography by Eugene Schufftan helps to create this mystic image. Lilith is often shown behind grills and bars earlier on, before she emerges into the outside world and one enchanting image sees her kissing her reflection in a lake, the very act reducing the reflection to shimmering ripples on the surface: can anyone know her?

The part leans on being borderline sexist, the idea of the enchanting, liberated woman as somehow being a dangerous (almost evil) threat to the safety and mental security of the men around her, deliberately endangering the decent world with her sexual openness. It largely manages to avoid this due to the performance of Jean Seberg, who gives Lilith a vulnerability and suggestions of deep psychological trauma that underpin her surface sexuality, flirtation and predatory nature. It’s no surprise that she is so completely able to overwhelm the repressed, inverted Vincent, or that he becomes such a willing slave to her whims and spur-of-the-moment suggestions.

Much of this disintegration of Vincent underpins the second half of the film, as he and Lilith engage in a dance that ends up having overwhelmingly negative consequences for each of them and for many of those around them. Intriguingly, Rossen’s vision of this mental institute as a more bohemian organisation suggests that the staff all seem aware of (and even tacitly encourage) the relationship – although whether this is part of a treatment or some sort of bizarre other motive is unclear. However, all this doesn’t help to make either character one we really care about, or make the story crystallise into something that carries real impact.

That captures the central problem of the film – Rossen deliberately builds the story with an elliptical sense of mystery in which the actions and motives of characters remain deliberately unclear, and the world they live in takes on elements of the dreamlike fantasy world that Lilith herself sometimes lives in (complete with her own language). Events seems to move with little sense of time. There are surreal interludes, not least an extended sequence where Vincent takes Lilith to a jousting competition (yes you read that right). It’s perhaps all a part of understanding how the personalities of the two lead characters slowly collapse over time into themselves, but it also serves to keep a distance between the film and the viewer. The final tragic outcomes are predictable from the very start of the film, but there is still a certain power to them. As a study of what slow mental disintegration may look like, Lilith is an intriguing little picture, but basically a little too hard to invest in emotionally to carry real impact.
Email ThisBlogThis!Share to TwitterShare to FacebookShare to Pinterest
Labels: Gene Hackman, Jean Seberg, Jessica Walter, Kim Hunter, Peter Fonda, Psychological dramas, Robert Rossen, Social issues, Warren Beatty