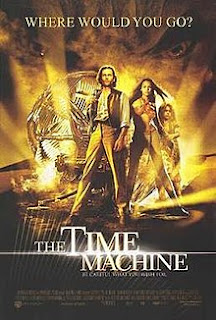 Every so often during this hysterical travesty of poor film-making, it’s worth remembering that it was was directed by HG Wells great-Grandson. If that’s not a reason for HG Wells to invent a time machine and travel into the future, in order to give his descendant a slap, I don’t know what is.

Anyway, with a plot vaguely reminiscent of some elements of the original novel, but just as inspired by a strange mixture of Hollywood blockbusters and Colin-Baker-era Doctor Who, The Time Machine stars Guy Pearce as Dr Alexander Hartdegen. In New York in 1899, Hartdegen is exactly the sort of naïve, floppy haired, genius eccentric so beloved of Hollywood movies, fascinated by time. When his fiancée Emma (Sienna Guillory) is killed in a mugging gone-wrong, obsession to prevent this leads him to invent a time machine – but he finds himself unable to prevent Emma’s death. Travelling forward into the future to find out why he eventually finds himself 800,000 years in the future where the Earth is occupied by the peace-loving Eloi and their brutal hunters, the subterranean Morlocks.

It’s hard to know where to begin with this film, but let’s try. It’s very poorly written. The dialogue clunks to the ground in a way reminiscent of the lumps of the moon that fall to the Earth in the future Hartdegen sees. There is scarcely any logic in the events we see, from the mechanisms of time travel to computers lasting hundreds of thousands of years with no identifiable power source. Characters tend to do things because the plot needs them to do it, rather than for any actual logical reason. Character development occurs with a randomness: Hartdegen starts the film as a buck toothed, shaggy haired “eccentric” and ends it as a ripped, action-hero haired heartthrob. No idea how that progression is meant to work, but you certainly won’t find the answer in the script.

It’s also poorly directed. Wells, working for the first (and only) time with live action actors has no idea at all about how to set a film’s tone or pace. The tone veers wildly from lowbrow comedy to highblown tension from tragedy to farce. Scenes that are meant to pluck the heartstrings will bring out tears of laughter. The actual comic bits will only bring out groans. Action scenes late in the film are shot with a ham-fisted bluntness that reduces them to laughable, cheesy crapness. Bright lights and wide angles frequently make a film that cost over $100 million to make look like one that cost a tenth of that. I will cut Simon Wells some slack, as he had to stand down from the production meaning it’s final moments were put together by Hollywood Hack Gore Verbinski, who probably just wanted to be out of there as soon as possible.

Also the whole design is so stupid. It’s a sort of steam-punk cool, but with no logic applied. The time machine never moves from its fixed geographical point, so it’s just as well no one tried to build a house on it or that the moon collapse didn’t drop a pile of moon rock on top of it. The time machine itself is a wonky contraption, full of spinning metal things and odd surfaces but of course Hartgeden doesn’t even consider installing a seat belt of any head protection. The Morlock design is equally bad, bright lighting making them look more like the bastard spawn of the Orcs from Lord of the Rings and Oscar the Grouch from Seasame Street.

At the middle of it all you have the sort of bizarre cast that could only have been assembled by some sort committee asking first “who’s cool?” and second “who needs money?”. Cool is surely the only reason Samantha Mumba (yes that Samantha Mumba) ended up in this film, as a sexy Elio lady who might just make Hartgeden forget all about that fiancée he’s spent four years obsessing about. At the other end, in one of his finest performance of cash-grabbing ham, we have Jeremy Irons. I have to admire his pluck, going through a laborious (Oscar-nominated!) make-up job (albino with a brain growing down his back), but the sort of sub-Scar speechifying the Über-Morlock delivers at the film’s climax (not to mention a bizarrely wonky final fight scene) is the work of a man already mentally spending the money on restoring his new castle in Ireland.

At the centre, Guy Pearce. I think at this time Pearce was going through some sort of career crisis. He’s handsome enough to play rugged, leading-man, action heroes like the type Hartgeden becomes. But in his heart, he’s more at home playing weirdos, outsiders and oddball (witness the happiness with which he embraces the buck-toothed oddness of early Hartgeden). So God knows what he made of this, but you can sort of tell he thinks the whole thing is crap, but doesn’t know what to do other than play it with a straight-jawed commitment (he’d soon learn, as Irons has, to meet crap with ham). Copper-bottomed crap at that, the sort of crap that would normally have you running for the hills. So Pearce sort of gets his head down and just gets through it and clearly hopes to still have a career when he comes out the other side. Which I suppose is more than Samantha Mumba managed.

Events sort of happen at this film, which seems to have some sort of confused message about moving on (“Your fiancée is dead? Man up and get over it!”) and wants us to live a life of individualism even while Hartgeden sets about giving the poor Eloi the sort of post-Victorian education that eventually led to their ancestors cracking the moon in half and wrecking the world. It’s the sort of film that ends things (literally) with a bang, Hartgeden creating some sort of time bomb out of his time machine and then running super-fast away (fortunately much faster than the allegedly super-fast Morlocks. Also the shockwave decides to stop once it’s killed all the Morlocks meaning Hartgeden is only guilty of mass genocide rather than wiping out the world).

It’s all so far away from HG Wells cautionary tale of scientific progress gone awry that you wonder if his grandson even read his book. Did HG envision one day that a film would be made where a Morlock does a head turn double take, like some sort of Seasame Street reject, a few seconds before he blows up? That Jeremy Irons would pale up to play a character who might as well be called Gruber-Morlock? That Sienna Guillory would be saved from a mugger only to be hilariously killed off camera by a horse? That the future would be the singer of Gotta Tell Ya would repopulate the planet with a bored Australian actor? If HG did make that time machine, we better tell him 2002 is a year to miss.