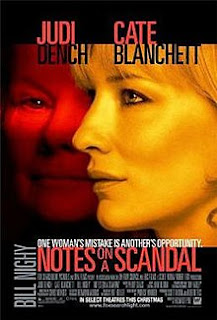 Zoe Heller’s novel Notes on a Scandal makes superb use of an increasingly unreliable narrator to reveal the complications in the affair between a female art teacher and a young male student. It’s a device that doesn’t always carry across as well to film, but Richard Eyre and screenwriter Patrick Marber have still crafted a fine story about obsession and envy in all its different ways.

In an inner-city school, bohemian art teacher Sheba Hart (Cate Blanchett) is a new arrival, struggling to learn how to control her students. It’s a skill long-since mastered by jaded and bitter history teacher Barbara Covett (Judi Dench), who soon finds herself fascinated by the attractive and engaging Sheba. This relationship is complicated when she discovers that Sheba has begun a sexual relationship with one of her 15-year old students, Steven Connolly (Andrew Simpson), a student with a difficult record who has shown a surprising interest in art. As Barbara positions herself as Sheba’s only trusted confidant, the danger of discovery begins to become ever more likely as Sheba’s behaviour becomes more and more reckless.

The real strength of Eyre’s film are the two lead performances from Dench and Blanchett, a match-up surely made in casting heaven. Dench is superb in one of her best film roles, turning Barbara Covett into exactly the sort of shrivelled up, bitter spinster you are not surprised to learn has led a life of loneliness. Dench laces the performance with a sharp nastiness, masked behind a chilly professionalism, but she also makes clear the aching loneliness, the desperation and the ability to deceive herself that Barbara has, the longing to be loved but also the possessive obsession that drives love away.

She’s equally well-matched by Blanchett, at her most glamourous and natural as Sheba. One of the film’s strengths is the way it avoids giving spurious psychological reasons for Sheba’s obsession for this basically fairly unpleasant young lout. Blanchett identifies this sense of being trapped in Sheba, this desire to rebel and taste a little bit of freedom (in every home scene she is shown undertaking most if not all the housework and childcaring duties), feelings that mutate into a sexual obsession with Connolly. Blanchett is desperate, self-deceiving and hugely tragic, unable to fully express the reasons for her feelings herself, but unable to let go of her addiction to a new wildness and danger in her life that you feel she has never really felt before.

These two performances power a film that explores obsession and envy, with Barbara obsessed (to a scarily possessive and manipulative degree) with Sheba, exploiting Sheba’s own reckless and sexual obsession with Connolly. These feelings are shown to be often beyond the understanding of other characters, and both women ret-con events and reactions from the target of their obsessions to build elaborate fantasy worlds. It’s the danger of obsession here, the way we shape the facts to meet our desired preconceptions. It doesn’t matter what reality, or what anyone else, says – you want to believe what you want to believe.

And it’s these obsessions that lead people both to take unbelievable risks and also to feel a crushing sense of envy and possession. Both Barbara and Sheba can barely tolerate the idea of their loves focusing attention elsewhere, and despite seeming to have so much control in their relationships are helpless victims. Sheba is reduced to begging tears when it feels like her relationship with Connolly is burning out. After all is revealed, Barbara’s efforts to take control of Sheba’s life are revealed to be powered by an almost desperately sad need to believe that Sheba and she are starting a new life together. So deep is Barbara’s denial about her own lesbianism (and so extreme her unhappiness about herself), it’s a romantic vision she is so deep in denial feels unable to even begin to put any sexual dimension onto.

Envy and human frailty run through the whole film. Most of the teaching staff, especially Phil Davis’ sadsack maths teacher in love with Sheba, carry their own small obsessions and envies. Sheba’s husband himself left his first wife for Sheba when she was one of his students. The students have more than enough rivalries to deal with.

It’s a deadly circle, with contact breeding obsession, breeding envy. To get such an effect, Marber’s adaptation needs to streamline the book. The biggest loss as a result is the book’s slow, creeping, realisation that Barbara is a deeply arrogant, bitter, unlikeable person who views most of the people around her with contempt. Here Dench’s waspish voiceover immediately makes it clear to the viewer that she is not that nice a person. It’s a shame, as it rather signposts for the viewer where the film may be heading.

The storyline also races through the book (the film is less than 90 minutes) which means it often feels more like a melodrama. While I think it’s a strength that the film doesn’t try and give a real reason for Sheba’s decision to seduce (or be seduced) by her student, other than to hint at her own sense of bohemian freedom being lost at home, I can see how others will find the reasons for why the radiant Sheba is so drawn to such a surly kid rather hard to accept.

But it still works, because the film is so well-played. With Dench and Blanchett at their best (and excellent support from Bill Nighy, quietly superb as Sheba’s husband, a decent guy who can’t believe his luck that he is married to such a wonderful woman, and whose world falls apart in bitter recrimination), it’s a film that gives more than enough rewards. The film gives us a decent ending from the book, with more hope for Sheba – but the balance suggests that for Barbara the cycle of obsession will only continue. Heaven help anyone who sits down on a park bench next to her.
Email ThisBlogThis!Share to TwitterShare to FacebookShare to Pinterest
Labels: Bill Nighy, Cate Blanchett, Joanna Scanlan, Judi Dench, Julia McKenzie, Juno Temple, Literary adaptations, Michael Maloney, Phil Davis, Richard Eyre, Social issues, Tom Georgeson