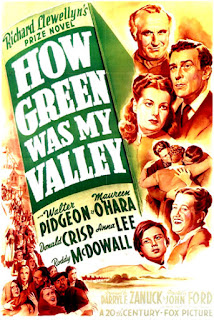 John Ford is by far-and-away best known for his Westerns, many of which are classics. So it’s a bit of a surprise that Ford always claimed the film closest to his heart was this occasionally sentimental drama about a young boy growing up in a Victorian Welsh mining town. Perhaps it was partly because, despite winning four Best Director Oscars, this was the only time Ford directed a Best Picture winner.

Following the remembrances of young Huw Morgan (Roddy McDowell), the youngest son (of several) of Gwilym Morgan (Donald Crisp), long-running foreman at the mine. The village is beautiful and life seems idyllic – until harsh economic conditions start to take their toll on the village. Wages are cut, moves towards unionisation are harshly resisted by the management, one-by-one the sons are laid off in favour of cheaper labour and the slag of the mine slowly turns the village into a dirty, stained mess. At the same time, the village is shown to be increasingly insular and judgemental, distrusting of outsiders, and suspicious of the preacher Mr Gruffydd (Walter Pidgeon) and the attraction between him and Huw’s sister Angharad (Maureen O’Hara) – made worse after she marries. Huw’s youthful innocence and naivety are met with an increasing attack from reality.

Ford’s film is today a controversial choice for Best Picture – among the films it beat were The Maltese Falcon and, most strikingly of all, Citizen Kane. It’s tough for any film to hold onto the same level of public affection, when it’s widely seen to have robbed a film commonly held up as one of the best (if not the best) of all time. But How Green Was My Valley is no travesty of an Oscar-winner on its own merits. It’s a solid, impressive, sentimental piece of episodic film-making that won’t disappoint you, even if it doesn’t inspire as much as it should. 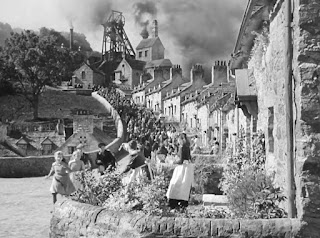 John Ford directs a handsomely mounted film, full of luscious monochrome shots. It’s a shame that the original plans for the film – to shoot on location in Wales in technicolour – were prevented by World War Two, as the sweep of the real locations would have added a real epic scope to the drama, not to mention make the decline of the village even more obvious visually. But the recreation of the Welsh mining village they planned to film in (in Malibu of all places!) is faultlessly impressive, and Ford creates a real Celtic charm in his shooting of the film.

Celtic is perhaps the key word here as, along with the location, the other thing that ended up jettisoned in the film was its Welshness. There is precious little – if anything – Welsh about this film. It contains one Welsh actor (Rhys Williams), and Ford’s cast use a parade of actors ranging from an attempt at Welsh from Crisp to an imperious mid-Atlantic drawl from Walter Pidgeon. Most actors however settle solidly for something close to Irish – and it’s pretty clear to me that Ford, proud of his own Irish heritage, basically saw this a story of the old country forcing its sons to head to the new country, in the same way his own parents emigrated. It also makes sense for casting the film – there seemed to be precious few Welsh actors in Hollywood at the time, but a parade of Irish actors.

But look past the film’s complete lack of Welshness – not to mention its presentation of the Morgan’s family home as far more clear and spacious than it would have been in real life – and pretend this is an almost Irish story, and you can focus on the film’s strengths. Although presented with sentiment and nostalgia, How Green is actually a more coldly realistic film than that. While shot with a luscious regard for the past, the film’s themes work to undermine this as much as possible – dealing with disillusionment, depression, unemployment and societal collapse. While Huw may remember the past as being a glorious country, we can see from the tumoils of his family that it was far more complex than that. 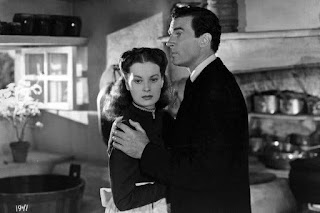 Of his siblings, most lose their jobs at the mines and are forced to emigrate. One who remains loses his life due to the mine’s working practices. Their father buries his head in the sand, and refuses to support any moves towards unionisation or the worker’s attempt to improve their lot. The family relies totally on the mine, but by the end of the film have been more-or-less destroyed by it. Even Huw’s sister Angharad, who has a good marriage to the son of the mine owner, finds herself trapped in a loveless marriage with her affections for Gruffydd the source of cruel comment from the village. The valley may be green on the surface, but it’s far darker underneath.

And poor Huw either doesn’t notice, or doesn’t care. After struggling through bullying from a teacher at school, he finishes school and is awarded a scholarship – only to reject it in favour of remaining to work in the mine, having learned all the wrong lessons from his life (and to the horror of his father). Ford stresses Huw’s youthful naivety by not ageing up Roddy McDowell (very good) at all as Huw – Huw remains forever a 12-year-old-boy, even as events race on. It’s a neat capturing of both the older Huw (who narrates) imagination of what he was like, and also serves to stress how Huw’s nostalgia is framing the story we are seeing. It also makes Huw seem even weaker and vulnerable than he is – a shot of Huw labouring in the mine behind a seemingly giant cart hammers home his weakness – Ford shoots many scenes with low-angle lenses to make us visually emphasise with Huw and to see the world from his perspective.

How Green’s main weakness is its hesitation to commit to either the cold reality, or the hazy nostalgia that the film’s filming style uses. It lands between the two stools, wanting to tell us the truth while also wanting us to leave with a warm feeling towards the simpler times of the past. It’s perhaps not helped in this by the episodic nature of the script, which moves from event to event without much in the way of overarching narrative. It makes for a film that leans even more towards a slightly maudlin view of the past as a series of entertaining stories, which serves to cover even more the darker themes of the film.

Ford’s cast are a mixed bag. Donald Crisp is superb as the father, part imperious patriarch, part loving father – and won the Oscar for his work here. Equally good is Sara Allgood as his wife, the ideal loving mother than a son would remember, but with a spine of steel. Maureen O’Hara brings a passionate romanticism to Angharad, while Barry Fitzgerald and Rhys Williams are entertaining as a drunken trainer and his boxer protégé. Mnay of the rest of the cast though are weaker, with Walter Pidgeon rather stolid as Gruffydd and many of the actors playing Huw’s brothers reduced to balsawood under the burden of odd accents and earnest characterisation.

Ford’s film is a very good one that, if it catches you in the right mood, will certainly move you. I am not sure it caught me in the right mood on any of the occasions I saw it, but I appreciate its technical assurance and excellent direction. It fails to really find an effective balance between its darker tones and its nostalgic outlook, but it still works for all that. It’s not Welsh but it is a good film.
Email ThisBlogThis!Share to TwitterShare to FacebookShare to Pinterest
Labels: Anna Lee, Barry Fitzgerald, Best Picture, Donald Crisp, John Ford, Maureen O'Hara, Roddy McDowell, Sara Allgood, Social issues, Walter Pidgeon