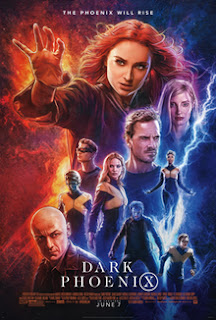 As Dark Phoenix limps out of a cinema near you, losing the studio almost $100 million and finally consigning to oblivion for evermore an X-Men franchise that has lasted almost twenty years, it would be easy to think this must be one of the worst films in comic book history. It’s not. But then again it’s not the best. Dark Phoenix’s main problem is not really that it’s bad, more that it’s a bit meh. After umpteen films, I’m not sure there was anything new to show or tell about these mutant superheroes – and this film certainly failed to find it.

It’s 1992 and the X-Men are international heroes – something that may be going to the head of Charles Xavier (James McAvoy) who gets feted at major events and has a direct hotline to the President. On a mission into space to save a stranded space shuttle crew, powerful telepath Jean Grey (Sophie Turner) is hit by a strange cloud of glowing space power – and when she returns to Earth she finds herself struggling with a split personality, with a dangerous darker side of her personality taking control of her actions. It’s encouraged by a mysterious alien Vuk (Jessica Chastain) who wants the power in Jean Grey for her own ends. Can the X-men overcome conflict and tragedy to come together once again and save the world and Jean Grey herself from her demons?

Simon Kinberg finally takes the helm after producing and writing several other films in the series – although his promotion feels more like a failure to find anyone else interested in doing the job. General lack of real interest permeates the film, as if most of the stars only came on board because they felt an obligation to put a cap on the series. Jennifer Lawrence presumably came back in order to be killed off (no spoilers, it’s in all the trailers) while Michael Fassbender gives off the air of a man who’d rather be anywhere else.

It’s not a huge surprise since the script goes through the motions, retelling a comic book storyline around Jean Grey’s “Dark Phoenix” personae that had already been done once (disastrously) already in X-Men: The Last Stand. Retreading the action here, this is certainly a better film (at least Simon Kinberg understands the characters and what makes them tick in a way Brett Ratner on that film didn’t) but it’s still a lot of the same story beats, similar types of location and brings it all together into a series of set pieces and moral conundrums that quite frankly we’ve seen before.

On top of which, Kinberg is not an imaginative enough visual stylist to make any of it look new. He’s not a bad director by any shot, but he’s a thoroughly middle brow one and he puts together a film that echoes and repeats stuff from the previous films in a way that never really feels fresh. Instead every single action beat or emotional moment feels like a quote from a previous film in the series, and never does the film really take fire and become its own thing.

This needed something special or new to bring the franchise roaring out in a blaze of glory. Instead it sort of meanders towards a resolution most people watching can probably already guess. Kinberg’s version of the story here also throws in several mistreads, most notably a plot line involving aliens and mystical clouds from space. Now I’m reliably told this fits with comic book lore. But much like in Spider Man 3 (remember that?!) when a blob of black alien space goo infected Peter Parker, introducing aliens into this series that has always seem grounded on Earth seems a bit – well – silly if I’m honest. Again it reminds you how slowly and carefully Marvel built up its universe stretching sand box. This ham-fistedly throws aliens of uncertain provenance into its world and somehow, despite this film featuring a hero who can shoot lasers out of his eyes, it feels a bit silly.

It’s not helped that the aliens plot line is confused and their aims unclear or that Jessica Chastain looks non-plussed to be in the thing at all, as if she lost a bet or something. It does mean that we get a (reasonably) happy ending of our heroes coming together to fight an external threat – but even this feels like a tacked on reason to throw into the mix a clear antagonist, instead of dealing with the sort of shade-of-grey (no pun intended) antagonist who is also still sort of one of the good guys.

It’s telling that the film works best when it focuses more on character. Sophie Turner does a pretty decent job as Jean Grey, despite not being given masses to work with. James McAvoy enjoys the best storyline, of a Charles who has lost his way slightly and been seduced by fame – but deep down is still the humane, caring and loving character he has always been. It’s a new light to see the character in.

I think the main problem with this film is its lack of anything really original other than the odd beat like that. Everything as been seen before and, like X-Men Apocalypse despite the world-shaking events everything feels a bit rushed and lacking impact. Dark Phoenix is a decent enough entry into a long-running franchise and doesn’t short change you of the sort of thing you’d expect from an X-Men film. But that’s really it’s a problem. It’s a solid, average, okay entry into a long-running franchise but not the final hurrah the series needed to go out on an earth-shattering high.
Email ThisBlogThis!Share to TwitterShare to FacebookShare to Pinterest
Labels: Evan Peters, James McAvoy, Jennifer Lawrence, Jessica Chastain, Kodi Smit-McPhee, Michael Fassbender, Nicholas Hoult, Simon Kinberg, Sophie Turner, Superhero, Tye Sheridan, X-men