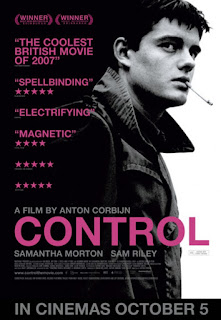 Depression is no respecter of fame or success. You can have everything many people would give their right arm for, and still find the prospect of life overwhelming. Control is a heartfelt, deeply affecting film about Joy Division lead singer Ian Curtis, who committed suicide shortly before a career-changing tour of America. Anton Corbijn knew Curtis and the band personally, and his deep connection with this story is obvious in every frame of this beautifully shot film.

In 1975, fresh out of school, Ian Curtis (Sam Riley) marries Deborah Woodruff (Samantha Morton). Curtis is a would-be poet, but finds his interest piqued when he attends a gig by the Sex Pistols and quickly forms a band – Joy Division – with a group of friends. Powered by Curtis’ imaginative lyrics, the group starts to make a name for itself, taking on a manager Rob Gretton (Toby Kebbell) and winning the attention of the influential Tony Wilson (Craig Parkinson). However, all is not well with Curtis: beginning to suffer increasingly from epilepsy, Curtis is also falling in love with a young Belgian journalist Annik Honoré (Alexandra Maria Lara) while still in love with – although increasingly lacking in mutual understanding with – Deborah. These pressures slowly build up on Curtis.

Control is a film about a person’s longing to have security and a sense of mastery over their own life, but finding they lack both this and the emotional strength to deal with the consequences. Curtis is a man buffeted by competing pressures and desires, as well as a paralysing fear that epilepsy will eventually claim his life. He is frequently unable to relax, and tries his utmost to divorce himself from the reality of his situation by living as much as he can in the moment, ignoring until it is impossible the burdens of making choices about his life and relationships.

Living in the moment is what, for Curtis, makes it all possible. You can see it in reflection in his performances of Joy Division songs – the intense focus, mixed with the channelling of his own epileptic fits into a series of mesmeric on-stage dances, filled with wild and jerky movements. The entire film suggests much of Curtis’ output could be retrospectively seen as a cry for help, many of his lyrics about concerns that would eventually lead to him taking his own life. At one point, Curtis sings heartbreakingly of his isolation in a recording studio booth – with Corbijn cutting straight to the rest of the band and studio technicians talking and going about their business in the studio, oblivious to the underlying desperation that runs through it.

Because the film makes clear no one knew how to help Curtis or even how to identify his problem. To his manager and the band, its all part of the rough and tumble of rock ‘n’ roll. To his studio, it’s the artistic personality. Doctors seem to barely understand how to treat his epilepsy and miss all the signs of the personal stress it places on him. Neither his wife nor girlfriend can imagine that his guilt and self-loathing run as deep as they do.

Corbijn’s beautifully evocative black and white photography adds hugely to this sense of dream-like non-reality around Curtis’ life, against the backdrop of some beautifully rendered Macclesfield locations. It helps wonderfully capture the sense of Curtis’ life somehow never coming fully into colour, as well as adding a deeply affecting air of melancholy over every frame. It’s also perfect for capturing the atmosphere of the 1970s clubs and bars that the band experienced.

The photography gives the film a feeling of the classic kitchen-sink dramas of the 1960s, and that is no bad thing, adding a certain depth to the tragedy of a working-class lad swept up by success and largely unable to cope with the burdens of expectation. Curtis is shown to be constantly overwhelmed by the pressure of live performance and the expectations of fans and viewers, yet also desperate to continue to have this channel to express himself.

Corbijn doesn’t give him a free pass though, and shows how he deliberately distanced himself from Deborah and their child. Often silent and disengaged, with a glazed look of a man who would rather be anywhere else than having to support a wife and child before he was 20, Curtis and Deborah’s marriage is one of affection but no shared interests of outlook. Deborah clearly provides Curtis with no kindred-spirit feeling, but he uses her as an emotional prop. Simultaneously he uses Annik for the same, while conducting an affair that clearly gives him a deep sense of shame, but finds impossible to resist. It’s living in the moment again: clearly, at every point, he would rather forget the other woman altogether, and is incapable of making the final life-altering decision needed.

This balance works so well because Sam Riley is astonishingly good as Curtis – real, pained, gentle, tender, selfish, with eyes that seem to have the life and will to go on drain out of them as the film goes on. Riley’s performance is pitch-perfect, and his empathetic brilliance for this man who did not know how to express his own feelings clearly is deeply moving. Over the film you see a sensitive man slowly fall apart in self-loathing, feeling trapped in his own life and unable to break free.

The film is stuffed with excellent performances, with Samantha Morton very good as Curtis’ deeply caring wife who unwittingly smothers him with demands – demands that are more than fair considering she is left frequently to hold the baby while her husband disappears for days on end. Alexandra Maria Lara has less to work with, but does a lot with Annik. Toby Kebbell provides some much needed lightness as Joy Divison’s manager, a blistering, foul-mouthed force of nature who can’t even begin to entertain the idea that his lead singer might consider ending his life.

The final sequence of the film, as Curtis (off camera) decides to follow-through on committing suicide (his second attempt to do so, another clear sign of those around him being totally unable to respond to the signals) is unbearably sad, ending with a beautifully evocative, tear-inducing shot of the crematorium releasing its ash - the last vestige of this lost life – into the sky to drift and disperse freely in a way Curtis never could. Control is a modern classic of British realism and possibly one of the finest music biopics ever made. Corbijn has the soul and eye of an artist, and brings all this to bear on a deeply heartfelt and moving film.
Email ThisBlogThis!Share to TwitterShare to FacebookShare to Pinterest
Labels: Alexandra Maria Lara, Anton Corbijn, Biography, Craig Parkinson, Harry Treadaway, Joe Anderson, Sam Riley, Samantha Morton, Toby Kebbell