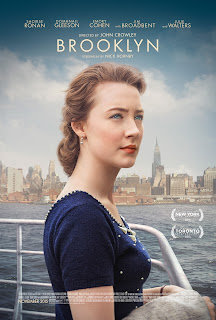 In the 1950s, Irish immigrants flocked to Brooklyn to build themselves a new life. Those who made the move often found themselves torn between two worlds – the lure of the new life they were building across the water, and the pull of the land of their fathers. Brooklyn, based on a successful novel by Colm Tóibín, places this conundrum in an intensely dramatic context by making the conflicting calls on its central character as much romantic as they are emotional.

Ellis Lacey (Saoirse Ronan) is our homesick young woman, eager to build a new life in America. Sponsored by kindly priest Father Flood (Jim Broadbent, with more than a passing resemblance to Tóibín) and living in the boarding house of kindly-but-no-nonsense Mrs Kehoe (Julie Walters, in a role surely written for her) she finds work in a department store and trains at night as book keeper. She meets and falls in love with a sweet Italian American plumber Tony (Emory Cohen), but when tragedy occurs back in Ireland, on her return there she is strongly drawn to her homeland and to kindly, handsome Jim Farrell (Domhnall Gleeson). Which life will Ellis choose?

You can see why Brooklyn was so popular with Oscar voters, and why it struck such a chord with so many people. It’s reassuringly, warmly, old-fashioned, a big-hearted, brightly filmed, gorgeously mounted “woman’s picture”, the sort of story that Hollywood studios churned out in the 1940s and 1950s (you know, those sort of “who will she choose!” films). Crowley pulls the material together however with real emotional force, married with an interestingly different (if gently touched upon) theme of the immigrant experience.

Helped by a very good script by Nick Hornby, Brooklyn is not only emotionally moving but also much funnier than you might expect. Part of this is deliberate choice, expanding parts of the novel (particularly the dry humour of Mrs Kehoe, seized upon with relish by Julie Walters) that bring the funny, but also from the warmth, regard and humanity it invests its characters in. Ellis is a character so well drawn, whose feelings are so real, that we end up feeling deeply invested in her, and all the more ready to respond to her quick intelligence and dry (but gentle) wit.

It’s a gift of a part for Saoirse Ronan, who is quite simply outstanding as a quiet, sheltered woman who grows, changes and decides to create her own destiny before our very eyes. (Helped by Hornby’s script again, which uses the Ireland-USA-Ireland structure to pinpoint many dramatic bookends and contrasts that Crowley subtly, and not forcefully, brings to the screen.) Ronan’s intelligence and her conflicting desires are clear in every scene, while her eyes seem able to communicate reserves of emotional depth. In two cultures where it isn’t easy for a woman to define her own destiny, Ronan brilliantly shows the difficulties many woman had in understanding or expressing what they want, in a world where they haven’t been set-up to think like that.

The film also doesn’t make it easier for her by making her two suitors – while radically different men – both such charming, lovely guys. Cohen’s Tony is a boyish enthusiast, full of hopes and dreams, who seems to represent everything that America has to offer Ellis. Domhnall Gleeson’s Jim is decent, honourable, kind, old-fashioned man who represents everything that she realises her Irish culture has for her – tradition, decency and a sense of self. It also speaks to how well drawn Ellis is by the film, and how deeply well-though out Ronan;s performance is, that it makes perfect sense that these two very different men would be drawn to her, and that both bring out different parts of her personality, which never feel contradictory.

It works as well because we’ve lived through everything Ellis has. She is present in nearly every scene in the film, and we see her change from a shy, scared, frightened woman on the boat from Ireland who needs to be cared for by an experienced emigrant fellow passenger (a very good cameo from Eva Birthistle) to a woman who flourishes in her new surroundings and the opportunities she is given. We need to feel that connection with her, since some of her behaviour (if it came from a man) would probably be seen as quite shabby indeed. But because we have such an understanding of her inner life – and because Ronan has such an empathetic and expressive face – we understand the reasons for her conundrum.

It’s that conundrum that lies at the centre of the film, and to be honest what dominates it. It works because it is done with such emotional truth (aided by Michael Brook’s excellent, heart-string tugging score that mixes American sounds with Irish folk to glorious affect), but the film is primarily a nostalgia romance. While it’s very setting makes you think about the immigrant life, it has very little to say really about either the cultural phenomenon or the impact it has on either the USA or Ireland (a charity Christmas meal for former Irish railway workers now all homeless is as close as it gets to talking about long-term integration). It doesn’t really matter, because the central story sweeps you up so much, but it does make the film more of a romance than the grander claims made for it by some as some sort of commentary on Irish immigration.

But there’s nothing wrong with such a handsome, romantic, emotional drama, or one that feels so reassuringly old-fashioned, even as it is made with touches of wit and confidence. Making some welcome comments on feminism, and led by Saoirse Ronan at her finest, it’s still a triumph of old-style, romantic, women’s pictures that you’d have to be pretty cold not to feel some sort of warming in your cockles by the end of it.
Email ThisBlogThis!Share to TwitterShare to FacebookShare to Pinterest
Labels: Brid Brennan, Domhnall Gleeson, Emory Cohen, Irish films, Jim Broadbent, John Crowley, Julie Walters, Romance films, Saoirse Ronan, Social issues