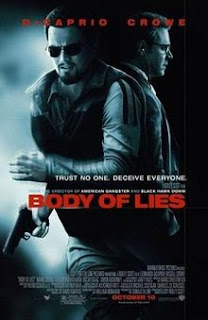 Ridley Scott is a bit of a curate’s egg as a director. You can always expect a film with a certain visual flair, as well as a story that attempts to tackle big themes and engaging topics. However, it doesn’t always produce an end result that really grips or feels like something that particularly stands out from the crowd. That’s what you end up with Body of Lies, a film that constantly feels like it is on the cusp of saying something important or interesting about the relationship between East and West, but constantly falls back on the sort of spy movie tropes it initially feels like it wants to debunk.

In the Middle East, Roger Ferris (Leonardo DiCaprio) is a dedicated CIA operative, with an intricate knowledge of the cultures and issues of the region. He constantly finds himself frustrated and undermined by his boss Ed Hoffman (Russell Crowe), based in Langley, who is constantly willing to sacrifice long-term gains for short-term political pay-offs. Assigned to Jordan, Ferris begins an investigation into a terrorist cell, working closely with head of Jordanian security Hani Salaam (Mark Strong) – but Hoffman’s intercessions increasingly cause tension.

Scott’s film is stylish and well assembled, with a great sense of pace and place. The contrasts between DiCaprio on the ground (in the dirt, facing dangers and tackling everything from terrorists to rabid dogs) and Crowe back in the States (rarely if ever seen without a hands-free phone set dangling from his ear, viewing everything at a distance with no understanding of the intricacies) is well drawn. The sense of complete cultural misunderstanding and lack of connection between East and West is established early, and attempts to cross it generally lead to disaster. The patience and expertise of the Jordanian security forces is contrasted constantly with the more slap-dash, hasty efforts of the CIA to meet the same goals. It’s all set for something quite interesting.

But then the film somehow doesn’t quite come together. Its episodic structure increasingly stretches out as action moves back and forth from Jordan to Langley and back again. A particularly wild scheme by Ferris (which, to the viewer not the film, suggests he is as incompetent and reckless as Hoffman) turns the film towards the sort of kidnap/torture/nick-of-time-rescue plotline that wouldn’t look out of place in 24 or James Bond. Basically, the plot turns on the film transitioning from something with a genuine political statement to make into the sort of disposal rent-a-spy-thriller that you forget pretty quickly.

DiCaprio gets a lot of “big” moments to juggle with, as well as a rather forced romance with a Jordanian nurse (something that he and Golshifteh Farahani play very well, but seems to have wandered in from an even more conventional film) but the film works hard to paint him as the “hero” who knows better than his superiors, despite the film chronicling a string of mistakes. Crowe enjoys himself as self-important windbag behind a computer, as uncaring as the institutions he represents.

The real star of the show however is Mark Strong, excellent as the suave head of Jordanian intelligence, seemingly the only character who has any understanding about what is going on. With a cool sharpness, slightly playful politeness and a slight chill of threat, Strong is the film’s most interesting character. There is a striking point made here that the most effective person in the film is a Jordanian spy chief with a mixed reputation – but the film largely shirks the possibility of really using this to demonstrate how out-of-their-depth the CIA agents are, as if worried that flagging up their manifest incompetence at every turn would sell badly Stateside.

It’s part of the film’s general lack of soul behind the skill of its construction. I know Scott is deeply interested in these themes of East vs West and the culture clashes that develop from it, but it just doesn’t come out here at all. There was a film to be made here about how the war on terror has thrown the CIA and the West into a setting they don’t understand, playing by rules they haven’t been briefed on. But all too often the film instead settles for telling us the same-old-same-old, padding out its runtime with spy story clichés and thriller plotting. Scott himself even uses visual tricks – surveillance drone shots and 24 style action – which suggest that somewhere along the line his heart wasn’t really in it. Body of Lies could have been a really interesting thriller about the world today. Instead it’s just another spy thriller about the war on terror.
Email ThisBlogThis!Share to TwitterShare to FacebookShare to Pinterest
Labels: Action Films, Ali Suliman, Leonardo DiCaprio, Mark Strong, Oscar Isaac, Ridley Scott, Russell Crowe, Simon McBurney, Spy thrillers, Thriller