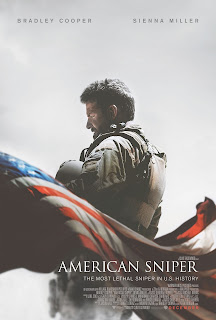 All war films walk a fine line: too far one way, and you glorify the violence of conflict; too far the other way and demean the bravery of the soldiers sent to fight it. It’s a tricky balance, but one American Sniper handles with real confidence, astutely putting together a film that can celebrate the bravery, skill and professionalism of its lead character but deplore the psychological impact killing has on him, while subtly suggesting the war he was fighting was scarcely worth the sacrifice.

Chris Kyle (played by an almost unrecognisably beefed up Bradley Cooper) is a Navy SEAL sniper stationed in Iraq. Kyle’s role as a sniper is to protect the troops on the ground from threats they can’t see, and it’s a job he treats with immense seriousness, believing he has a duty to protect others. Kyle soon builds up an astonishing number of kills (a record for US soldiers), but increasingly the burden of killing from a distance impacts Kyle more and more. Over the course of four tours in Iraq, Kyle becomes distant and withdrawn at home from his wife Taya (Sienna Miller) and children. Only after his final tour does he begin to seek help, finding a new purpose in life in helping other veterans suffering from post-traumatic stress. Which, tragically, leads to Kyle’s death, as he is killed in February 2013 by a veteran whom he was trying to help.

Eastwood directs with his expected unfussy smoothness and American Sniper is one of his finest films, a largely unsentimental, gritty look at the true cost of war physically and emotionally. Eastwood balances respecting Kyle’s skill and deploring the impact using that skill had on him. The film stresses the perverse necessity for empathy the role of sniper demands. Kyle is so good at the role because he will go the extra mile to protect his brothers-in-arms on the ground. The psychological impact is heavy because this man, hard-wired to protect others, has to do so by gunning down hundreds of people. Is it any wonder it has such a huge impact on him?

The sequences set in Iraq have the grimy air of reality to them, with dust, dirt, sweat and glare dominating every frame. Eastwood pulls no punches on the impact of bullets from distance on bodies, the violence of direct combat, the terror of being pinned down by enemy fire or the waste of lives (both civilian and military). While the film celebrates the bravery of frontline soldiers, it’s telling we see very few officers at all, but stay with the grunts, and the film is one of their stories and their choices. The politics behind why the soldiers are even there are barely touched upon and, as the tours tick by, the feeling of being there because they are there permeates the film. There is always another insurgent leader to take out, another target to find, and the soldiers make so little progress towards their actual target (locating al-Zarqawi) that he’s barely even mentioned.

Eastwood still subtly suggests our cause in Iraq hardly helps to win over hearts and minds. The soldiers’ interactions with the population are consumed with tension and violence, usually involving scared soldiers shouting at unarmed people, cable-tying men on the floor and failing to relate to or understand the cultures they are in. Any attempts to do so usually end with poor consequences, and the closest to a bond Kyle forms with someone outside of the soldier circle leads to a tragic ending. It’s not a film that has an affinity with the consequences of war, or the impact it has on lives.

If you have any doubt about that, then watching the slow breakdown of Kyle over the course of the film (manfully shrugged off and denied for as long as possible by the man himself) should shake that. Much of the impact of this comes from the excellent performance of Bradley Cooper, who slowly turns the light, fun and intelligent man we meet at the start of the film into someone sullen, withdrawn and permanently on the edge of anger, unwilling to even to begin to think about the possibility that anything he has seen has had any lasting impact on him. There is even some questioning of the damage extreme masculinity and an unwillingness to be open about your problems has on people (themes that Eastwood has always been far more interested in than he is given credit for).

In fact, excellently assembled as the sequences in Iraq are (especially the tension around a semi-duel between Kyle and an insurgent sniper known only as “Mustafa”), I could actually have had more time given over at the end of the film to exploring how this man with such a warm empathy in him discovered a new purpose in his life. Kyle’s other heroism – and perhaps the secret to the regard he was held in by so many when he was murdered – was his commitment to helping people any way he could. His refocusing his life to help veterans deal with PTSD and physical disabilities could have been brought out into greater focus. Kyle’s greatest strength was his empathy and he became so open about his own problems, and his struggle to readjust, that it helped inspire many others to do the same – and it’s a plot thread I feel deserved a few more minutes at the end of the film.

It does however make a wise call by ending the morning of the day that Kyle was killed, with him leaving his family to spend a few hours with the veteran who killed him. Kyle had been involved in the development of the film, and it stands as a fitting, honest, tribute to him. Powered by Cooper’s superb performance, well supported by Sienna Miller as the wife who wants him to acknowledge the impact war is having on him, Eastwood assembles a fine war film, that acknowledges the sacrifices and heroism of soldiers, but also deplores the horrors conflict enacts on their psyche. It’s a mature, intelligent and well-handled film and well worth your time and effort.
Email ThisBlogThis!Share to TwitterShare to FacebookShare to Pinterest
Labels: Biography, Bradley Cooper, Clint Eastwood, Luke Grimes, Navid Negahban, Sienna Miller, War film