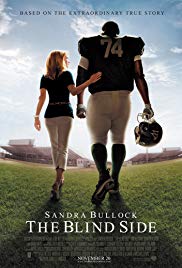 Sandra Bullock won an Oscar for this sweet but unchallenging film, the sort of thing you could have expected to see on TV in the 1990s as a “movie of the week”. She plays Leigh Anne Tuohy, a determined and driven woman who adopts and mentors Michael Oher (Quinton Aaaron), a gentle giant of a teenager who has grown up in foster care and who struggles with shyness. Michael has been accepted by his school for his potential skill, but the school can’t cater for his requirements for a less traditional teaching model (he struggles with reading and confidence). All that changes as Leigh Anne pushes for Michael to get the support he needs and encourages him to excel as a footballer.

This is the sort of naked crowd pleaser that will leave a smile on your face – and probably escape your mind after a few days. It’s devoid of challenge and ticks every single box you would expect this kind of rags-to-riches story to cover – the initial struggle, the growth in confidence, the setback, the rebound, the happy ending. It’s all there – and packaged very well by Hancock (heck the film won a surprise nomination for Best Picture).

It’s powered above all by a forceful, larger-than-life performance by Bullock, the sort of “personality” part that the actor has always excelled at (there is no doubt she’s a hugely engaging performer and always has been). Bullock grips the film by the horns and rips through the expected scenes. She’s a glamourous rich woman who isn’t afraid to go toe-to-toe with the local gangsters! She’s wealthy but she’s still in touch with her roots! She’s beautiful but she wears the trousers in the household! It’s everything you would probably expect, and Bullock can more or less play it standing on her head. She brings all her expert comic timing and exuberance to bear and mixes it with an emotional concern and empathy rarely called for in the romcoms that have made up much of her career. In a weak year (Carey Mulligan in An Education was her only plausible rival for the little gold man) she took the prize.

It’s probably the only thing that The Blind Side will be remembered for, however much most people will enjoy it when watching it. Its story of good triumphant and a disadvantaged young man getting the chance to come to peace with himself and turn his life around, are bound to put a smile on most faces. There are lots of funny lines, and Leigh Anne is such a powerhouse she makes a chalk-and-cheese partnership with anyone she shares a scene with. But it's basically not got a lot more to it than just showing you a rags-to-riches tale, with a few slight notes of racial tension thrown in (and then barely even explored in any depth). A more interesting film might have taken more note of the differences between the Tuohy's background and the poverty of Michael's childhood neighbourhood and the fate of the rest of the people who grew up (none of whom had his advantages). But this is more interested in presenting an unlikely, balsy, champion of the underdog promote his life.

I suppose you could say that this film tells the story of the troubled background and eventual success of a young black man and not only filters all this through the experience of a family of wealthy white people, but also suggests that the chances of a black man achieving this without the support of a white family was practically impossible. But, then this isn’t a film with a political agenda. It’s just trying to tell a charming, uplifting story. Take it on those terms and it’s enjoyable. Try to delve into it any deeper and it will puff up and disappear in a burst of feelgood warmth. But the only reason it will be remembered – the only reason why it even remotely stands out – is as the film Sandra Bullock won an Oscar for.
Email ThisBlogThis!Share to TwitterShare to FacebookShare to Pinterest
Labels: Biography, John Lee Hancock, Kathy Bates, Kim Dickens, Quinton Aaron, Sandra Bullock, Sports films, Tim McGraw