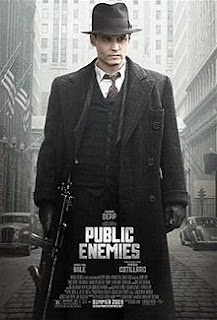 Michael Mann has an affinity for crime films. With Heat as one of his calling cards, Public Enemies is his attempt to do the same in the classic prohibition and bank robbery era of the 1920s. The guys going head-to-head this time?  John Dillinger (Johnny Depp), coolest robber there is, an icon of the criminal classes, and Melvin Purvis (Christian Bale) rigid and committed FBI agent. Public Enemies however fails to match Heat, falling part way between history lesson and action thriller. Covering the last few years of Dillinger’s life, and the rise of the FBI, it’s a cold, strangely uninvolving film mixed with a few stand out action scenes where tommy guns go blazing.

One of the first things it impossible to miss about the film is Mann’s decision to shoot the film using HD video cameras. The advantages of this is it gives much of the film an immediacy and modern look that throws the viewer into the middle of the action and makes this at times look and feel like a piece of news reel footage rather than a period piece. The camera choice allows Mann to put the camera right into the action, capturing every detail at a fast pace. The film has the look at times of a genuine documentary, and removing the richness of film also gives it the air of being caught on a phone, like some of this was some sort of found footage. Or rather, a phone that has been handled by a gifted cinematographer for perfect framing.

The downside of the choice of HD camera is that it makes the film at times look rather like a behind-the-scenes DVD documentary, with its untextured shadows and lack of lighting. Frankly at points it makes the film look bizarrely a little bit dull in places, or unusually unprofessional. Personally, I feel the benefits it gives in immediacy are cancelled out by this. But that’s just me.

Away from Mann’s shooting style – and his usual high octane skill of cutting and assembling action scenes – the film showpieces a strange lack of insight into its characters or any real developments of their hinterland. This is particularly so in the case of Purvis who never comes to life either in the film’s staging of him, or in Bale’s firm jawed, muted performance. When the final film caption throws up news of his later resignation and years later possible suicide it doesn’t make you question things you have seen in the film or feel like a logical progression: it just doesn’t tally up at all.

The film does get some material out of how both sides play the media game. Purvis is a reluctant but fairly skilled player. His boss J Edgar Hoover (rather well played by Billy Crudup in one of the films best performances) is obsessed with spinning the nascent FBI to the media – half his scenes are bookended by press conferences – and his primary motivation is to exhibit himself to the media as the only logical choice for leading the FBI and the essentialness that it gains the powers it needs. Similarly, Dillinger and his fellow criminals delight in their media profile and do their damnedest to build up images of themselves as Robin Hoods (without the giving to the poor of course).

This is captured in Johnny Depp’s charismatic performance as Dillinger, a brooding, intense figure who would like to see himself as a sort of poet of the underworld. Dillinger talks about the banks money being their only interest and is frequently charming with an edge with regular people. He prefers bloodless robberies as they are cleaner and demonstrates a genuine sense of romantic openness with his girlfriend Billie. However, he is no angel. While he does not use violence as a first resort, he has no hesitation about using it as a second and will happily put bystanders at risk and rough up bank staff to get what he wants. He talks of escaping, but it’s clear that the game is an addiction for him and the danger is enjoyable – he takes an illicit thrill at one point of sitting in a cinema while his mugshot appears on the screen, wondering if anyone will dare spot him.

Depp’s performance is the finest thing in the film, a subtle and intelligent tightrope walk that teases depths that are perhaps not there, and suggests sympathies and agendas he perhaps does not have. While the character remains unknowable, you sense a great complexity and conflict there somewhere. He’s helped by being given a great actress like Marion Cottilard to play off, who makes Billie much more than just a gangster’s moll.

There is potential in the film, but it never really comes to life. For all the exciting shoot outs and drama, none of its characters are engaging or really interesting. The rest of the supporting cast feel like pieces to be moved around the board – many disappear with no real trace – and their fates pre-ordained by the demands of the plot. It makes for a rather flat experience, full of style, but never making you invest in it.
Email ThisBlogThis!Share to TwitterShare to FacebookShare to Pinterest
Labels: Bill Camp, Billy Crudup, Christian Bale, Crime drama, David Wenham, Giovani Ribisi, Jason Clarke, Johnny Depp, Marion Cotillard, Michael Mann, Stephen Dorff, Stephen Graham, Stephen Lang, Thriller