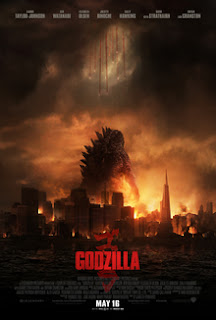 There is a lot of affection out there for Godzilla. I’ve never quite felt it myself, so I guess I was the wrong person to watch this film. This is a film celebrating the legend of a series of films from Japan about a guy in a rubber suit hitting other guys in rubber suits in a set designed to look like a miniature city. Gareth Edwards’ has directed an affectionate homage that at times flirts with being a more interesting film but never really commits to it.

In 1999, Joe Brody (Bryan Cranston) is forced to watch his wife Sandra (Juliette Binoche) die in front of him in a mysterious accident at the nuclear plant in Japan they work at. Fifteen years later, his now grown-up estranged son Ford (Aaron Taylor-Johnson), a bomb disposal expert, is called to Japan after Joe trespasses into the exclusion zone. There Ford and Joe discover there is no fall-out at the accident site – and that the accident was actually linked to a series of mighty beasts from prehistoric times who feed off radiation. The beasts are being investigated and monitored by a global organisation called Monarch – and they are starting to stir. Soon cities are at risk and our only chance of survival may be from alpha-predator Godzilla bashing the other monster out of existence.

Godzilla starts with a brilliant human interest story – a husband forced to sacrifice his wife to save hundreds of thousands of others. But around the halfway mark it loses all interest in its human characters, who become mere spectators to the mighty monsters hitting each other. By the final act, your interest in the action will depend on how much you can invest in a huge CGI monster hitting another huge CGI monster. With nary a character in sight, I’m not sure how much I could.

Gareth Edwards does a good job directing the film. It’s intelligently and imaginatively framed and Edwards shows some wonderful restraint in showing Godzilla himself, gently avoiding showing too much too soon (the monster doesn’t appear full in camera for well over an hour into the film). In fact, Edwards has a lot more interest in showing the perspective of ordinary people watching the rampage, running or simply standing in awe starring upwards at these mighty beasts. It immediately hammers home the scale and awe of these creatures. Edwards often films from the perspective of those on the ground, with the camera craning upwards seeing the colossal beasts.

It’s a shame that the film doesn’t lavish as much attention on the cardboard cut-out characters who are running around beneath the beasts. A fine company of actors are assembled, most of whom are relegated for much of the first half of the film to spouting exposition and the second half of the film to staring upwards in awe. Remember when Edwards made his breakthrough film Monsters? This film, sure, had monsters in it but it was a human interest story about two very different people thrown together after cataclysmic events. Edwards’ film worked because it was above all about people and their problems. Hollywood came calling.

And Hollywood of course missed the point. Edwards is a director who I think has some truly interesting work in him. Watch the scene as Cranston is forced to slam the safety doors on Binoche. This is a scene crammed with more drama, emotional investment and tragedy than the whole of the rest of the runtimes of Godzilla and Edwards’ Rogue One. Both of those films are well-made but derivative bits of geek chic, pandering towards the crowds by giving them parts of what they think they want, homage-stuffed retreads of other films that focus on bashes and toys rather than on people and characters. Edwards is becoming a purveyor of B-movie thrills, well made, but basically empty.

That’s your Godzilla movie here. Well-made but rubbish. Full of spectacle wonderfully filmed, but fundamentally empty. A film that is careful about what it shows you and when, but is basically lacking any real soul.
Email ThisBlogThis!Share to TwitterShare to FacebookShare to Pinterest
Labels: Aaron Taylor-Johnson, Bryan Cranston, David Strathairn, Elisabeth Olsen, Gareth Edwards, Juliette Binoche, Ken Watanabe, Monster films, Sally Hawkins