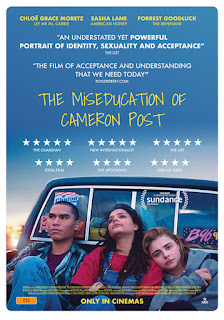 In 1993 teenager Cameron Post (Chloë Grace Moretz) is dispatched to a church-run sexual re-education camp after she is found to be in a same-sex relationship with a classmate. At the camp, her quietly cynical attitude quickly finds her aligned with the sceptical students Jane (Sasha Lane) and Adam (Forrest Goodluck) as they push up against the regime installed by Dr Lydia Marsh (Jennifer Ehle). How dangerous is the world of sexual re-education for its students?

Not surprisingly, the answer is very. The Miseducation of Cameron Post is a rather self-consciously indie film that sets up easy targets and then happily spends 90 minutes knocking them down. It’s often made with sensitivity, and has an excellent performance from Chloë Grace Moretz as its lead, a character you really root for, but this is a fairly empty viewing experience.

The film does get a lot of material out of the awful, cringing re-education programmes. It lands some blows against the hypocritical nature of the organisation, with at least one of the teachers (John Gallagher Jnr’s earnest Rick) also barely supressing his homosexuality – and it re-enforces the cruelty of forcing people into becoming something they are not. But this is hardly news to any right-thinking person, and it doesn’t always make for good drama.

This is partly because Cameron herself never feels isolated in this re-education camp. She almost immediately falls in with like-minded rebel friends, and several of the other students are openly struggling with doubts. While the film perhaps wants to show that this sort of social engineering is never going to work, it does mean that our heroine never really feels at a disadvantage. You can’t help but feel a more effective film would isolate Cameron among people professing they are true believers (even if it turns out later they’ve been pretending), and show her struggling against conformity and clinging to her individuality. Instead, there seems no threat or any danger at all that she will ever drink the Kool Aid here at this camp – not for one second do you feel any chance that she is going to conform.

It makes for a major weakness for the film. It also makes Jane and Adam rather boring characters. They don’t challenge Cameron’s viewpoint at all, but merely echo her inner views with an added spice of rebellion. It makes for uninteresting scene constructions, and it’s not helped by the lack of chemistry between the three characters. By contrast, her relationship with roommate Erin, who is desperate to overcome her sexuality, makes for a far more interesting dynamic. Two characters with very different inner struggles, trying to find a common ground but frequently failing. Emily Skeggs is also heartbreaking as Erin, a young woman deeply unhappy and seemingly destined to remain so.

But there isn’t enough of this sort of thing. Nor is the viewer really challenged to consider the viewpoints of those running the camps. Jennifer Ehle, as the doctor running the camp, is a domineering Nurse Ratched figure, in a role which needed more shades of grey. She’s never a woman honestly doing what she believes is best, just a bully enjoying the power. John Gallagher Jnr’s conflicted worker doesn’t come into focus as a fully rounded human being, and his torment is touched on but his reasons for the decisions he has made are never explored.

It all contributes to a disappointing viewing experience. The film is too often shot with a self-conscious indie coolness, which gets on your nerves after a time, with its constant moody fall backs and gloomy set-ups. But it’s also a film that is taking a bit too much delight in making rather obvious and safe points over and over again, and failing to invest itself with enough drama to make for a compelling story. It’s a disappointment.
Email ThisBlogThis!Share to TwitterShare to FacebookShare to Pinterest
Labels: Chloë Grace Moretz, Desiree Akhavan, Forrest Goodluck, Jennifer Ehle, John Gallagher Jnr, Sasha Lane, Social issues