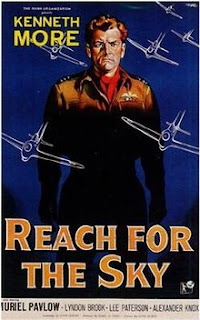 There are few stories of the Battle of Britain that captured the public imagination than Douglas Bader, fighter pilot ace whose exploits in the battle – and later in Nazi captivity – were all the more extraordinary because he had no legs. It’s one of the best examples around of good old fashioned British pluck helping overcome something – and Bader is without doubt a stirring hero, whose inspiration was so great he still frequently pops up in longlists of Greatest Ever Brits.

At least part of that continued inspiration is probably connected to this film. In fact Bader himself said his own public persona had been almost completely consumed in the public perception by Kenneth More’s performance of him. Needless to say Bader’s foul mouthed real personality (which left the briefing room littered with f-bombs) and abrasive difficultness (he refused to watch the film for almost ten years after a trivial dispute during its making about whether he would be allowed to double for More in long shots) was largely forgotten.

Indeed, the real Bader is washed away in Reach for the Sky by Kenneth More at his most charming, rogeuish and light. More (by his own admission) was not the actor with the greatest range in the world, but he was perfect for the sort of maverick, plucky, never-say-die Brit Bader was presented as in the film. Reach for the Sky ticks all the boxes of the events in Bader’s life as you might expect. From initial accident, to learning to walk again, to getting back in the sky, More plays it all with a brash bonhomie and British character that makes Bader charming and engaging – rather than the difficult egotist he reportedly was in real life. So much so that you kind of forget that Bader’s initial accident is largely caused by his own arrogance and stupidity attempting a dangerous manoeuvre to show off to a range of new pilots.

But then that’s because Bader’s ruthless determination to get back in the sky is inspiring. Reach for the Sky isn’t the film that’s going to make you question anything to do with the war or the dangers or costs of the work we do. Putting it simply, this is practically an advert for the British war effort made ten years after the war finished. It actually feels a bit odd that this film hit the cinemas and because a smash hit in the same year as Suez showed Brits that all the Empire-first, Britannia rules the wavesness the film celebrates was a pile of outdated guff.

But that isn’t to say that what that this film tries to do, it does badly. It lacks the sense of narrative adventure as stuff like, say, The Dam Busters or the importance of working together like Ice Cold in Alex or the bitter cost of war like The Cruel Sea. But as a portrait of a maverick doing his own thing and keeping the British end up its pretty much bang on. There isn’t really room for any other characters in the film’s narrative. It’s nominally narrated by a training colleague of Bader, but he’s barely a presence – the film zeroes in on Bader alone.

It makes for some decent scenes and there is a fair bit of inspirational feeling from watching Bader persevere – while never losing his temper – with walking again or taking up golf with a bullish determination. More’s Bader never shows a flash of anger or bitterness at things that have happened to him, instead carrying on with a jolly “Britain can take it” matey-ness. It makes him an entertaining person to follow around, even if the film itself isn’t particularly dramatic and offers a fairly safe version of an age-old “overcoming all odds” plot. Certainly enough to explain the films continued popularity and lifespan on Sunday afternoon TV.

And it touches a nerve because, even if he was a fully paid up member of the awkward squad in real-life, what Bader did – and the force of personality required to do it – were extraordinary, the sort of thing only 1 in a hundred could even consider doing. To not only walk again having lost both legs, but to fly – and to become a decorated war hero – is way beyond (thankfully!) the imagining of almost everyone watching the film. And, for all the weaknesses of the film, you can’t ignore or disregard the fact that Bader is an inspiration. More is excellent in a lead role tailored completely to his strengths, and the film has a charming boys-own adventure feel to it. It’s not a smart film, but it’s a crowd pleaser and nothing wrong with that.
Email ThisBlogThis!Share to TwitterShare to FacebookShare to Pinterest
Labels: Alexander Knox, British Films, Kenneth More, Lewis Gilbert, Lyndon Brook, Muriel Pavlow, World War Two