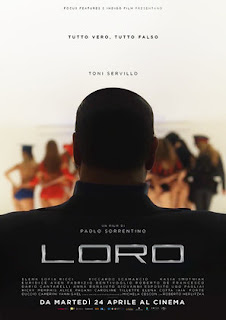 No one films decadence like Paolo Sorrentino. Many of his films have gone overboard to demonstrate Italy’s shallowness, corruption and greed. Loro feels like the subject he has been building towards his entire career: the heart of the whirlwind himself, Silvio Berlusconi. Sorrentino’s film is about Berlusconi, but it’s as much about the Italy he has created and the impact on Italians themselves. Its title translates as “Them” – and the film juggles with the idea of which “them” it’s referring too.

The film follows the career of Berlusconi from 2006 to 2009, as a he deals with the aftermath of losing power and the boredom of having very little to do in his palatial mansion. All around him – like flies around honey – the newly rich try everything to gain Berlusconi’s attention, throwing lavish prostitute-and-drugs parties. But what does Berlusconi want? Is it more of the same, is it a return to power, is it a chance to do good, is it a chance to make amends, is it a return to the spotlight? Who is Berlusconi?

Sorrentino’s film follows his usual style, and makes full use of his dynamic and electric directorial style. Boy this guy loves to keep the camera on the move, and he combines it with some snappily filmic editing that creates a series of scenes that fit sharply together. Sorrentino really can cut the hell out of a picture, and his style lends itself perfectly to depicting the extreme hedonism at the centre of the lives of many people whom he makes films about. His fast cut editing style, dynamic camerawork and use of modern music stringing it all together make for a perfect visual language for the shallowness he sees in large parts of modern Italy. But this approach doesn’t always engage the viewer, leaving them watching the technique instead – and that’s arguably what happens here.

A large chunk of the first half of the film centres around Riccardo Scamarcio’s Sergio Morra, a fictional “businessman” from Southern Italy who uses attractive women and drugs to land lucrative government contracts from ageing officials. Just in case we are in any doubt, it’s made clear very quickly that Morra is unbelievably shallow, venal, corrupt and interested only on what he can take from his country. His life is one of unalloyed selfishness, centred around drug-fuelled orgies (filmed very well by Sorrentino of course!). Morra builds a partnership with Berlusconi’s fading mistress (extremely well played with more than a hint of tragedy by Kasia Smutniak) focused solely on getting as close as possible to power. Almost all of the first 45 minutes (and yes that is too long!) is centred around establishing Morra’s vileness and his empty world. It’s as clear a portrait of modern Italy captured in one man as you can wish for, but its constant unpleasantness and prolonged sex and drugs with little plot gets more than a little wearying after a while. We get it Paolo!

But Sorrentino wants to make a clear point here: Berlusconi’s Italy has given rise to people like this, people who have an interest only in what they can take from the country, people who think being able to throw the most lavish party, having the most money, making the loudest noise makes them “better” than regular people. It’s these people interpreting the image of Berlusconi as giving them a green light for greed. When we promote puffed up egotists and fun-lovers as our leaders, then grasping venal imbeciles like Morra with no sense of morality or decency see that as an invitation to join them at the top table.

After this introduction to Morra, when we finally meet Berlusconi himself it’s surprising how different he seems. Yes he’s a casual, shallow, rather grandiose figure – but in the hands of Toni Servillo, Sorrentino’s regular collaborator, he’s a more complex person than you might expect. Bored and a little depressed at home, Berlusconi also sees himself as far more than just a party animal turned politician. He’s a man, for all his shallowness and greed, who needs to believe that he is there for the good of the people. But what the film doesn’t quite do is “nail” him – perhaps because he is unnailable – but the film doesn’t feel like it lands a true blow. Or even makes a really clear point about the presidency of this man. Sorrentino’s anger is in every frame, but I’m not sure he really puts together a convincing – or completely engaging – argument about this.

Servillo’s performance as Berlusconi is the true highlight of the film, a complex mystery of a man who wants to be decent, but not enough to change or to actually carry out selfless acts. Sorrentino sees him as a salesman at heart – the salesman who sold himself as the corrupted answer to all Italy’s problems – and the film’s highlight is probably a sequence when Berlusconi girds his tired salesman’s loins to cold-call a random ageing woman, plucked from the phone book, to flog her a flat in an apartment block he hasn’t even started to build yet. It’s a neat capturing of what energises this man behind the fixed smile – and a sign as well of how little reality matters to this peddler of dreams. You can see why business partner Ennio Doris (played also by Servillo, making Doris a neat facet of Berlusconi’s own personality) pushes him to get back to selling and blagging to rebuild his confidence.

Sorrentino grounds most of the film in the growing disillusionment of Berlusconi’s wife Veronica, expertly played by Elena Sofia Ricci. Smart, quick-witted but too ready for too long to sacrifice her principles for the comfort of marriage to the loaded Silvio, Veronica becomes, if not exactly a conscience, at the very least a voice for sanity in Berlusconi’s world. In a film where the majority of the characters are gilded fronts like Berlusconi or soulless obscenities like Morra, she is the closest thing we have to a decent person.

Veronica’s growing sense of discomfort at the “me-first”, power and money above everything world that Berlusconi has created draws the viewer’s attention to the other “them” the film deals with. Yes, we have the party-loving elite here, but the other them are the people we hardly see – the regular Italians, the ordinary citizens. These intrude rarely into the film, but tellingly they dominate the final sequences of the film which deal with the aftermath of the L’Aquila earthquake. As firefighters rest from their labours in the ruined city – including saving a statue of Jesus Christ from a ruined church – the camera pans across their exhausted, sweaty faces staring wearily, while the word “Loro” remains on screen.

It’s in that final shot that Sorrentino’s film really seems to land. Because amongst all this partying and greed which has dominated – and often exhausted the viewer – we are finally reminded that the people really paying the price are the regular people, whose needs are not monitored, who are readily and easily forgotten. Sorrentino’s film may drift too often in really making a point or feeling like it nails Berlusconi. But when it makes points like this it really works.
Email ThisBlogThis!Share to TwitterShare to FacebookShare to Pinterest
Labels: Biography, Elena Sofia Ricci, Kasia Smutniak, Paolo Sorrentino, Political satire, Riccardo Scamarcio, Toni Servillo