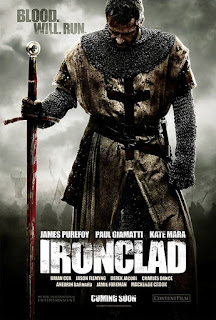 Let’s just take a moment to enjoy the fact that the most expensive film ever made entirely in Wales was directed by a guy called English. After that, you can enjoy the guilty-pleasure hack and blood nonsense of this sort of proto-Game of Thrones, which bears almost as much resemblance to British history as George RR Martin’s souped up re-tread with extra dragons.

Anyway, King John (Paul Giamatti) has signed Magna Carta – as always that document which gave the barons some say in the government is here reimagined as some sort of manifesto for a socialist revolution – but now Rome has told John that he doesn’t need to stick to it after all. So John hires (honestly) a load of Viking warriors to take out his enemies. Yes that is just as silly as it sounds. Before we know it, the barons need to take control of Rochester Castle, a stronghold which is apparently the key to the south of England. So Baron William d’Aubigny (Brian Cox) puts together a “Dirty Dozen” (well Dirty Half Dozen, it’s a British budget after all) to defend the castle, led by Templar knight Thomas Marshall (James Purefoy). Let the siege begin!

If that doesn’t give you an idea of the way the film mixes and matches parts of British history into some sort of heady brew, I don’t know what will. We got King John! We got Magna Carta! We got Templar knights! We got Vikings! All of this is frozen into a hyperviolent mixture of historical epic and “men on a mission” war film, with added limbs flying off left, right and centre. Most of it is delivered at an absurdly energised pace. At least all involved seem aware that they are making a stoopid B movie, rather than some sort of genuine historical epic.

Criticising the history of the supposed historical epic seems completely superfluous, so instead sit back and enjoy the skill with which Jonathan English apes Neil Marshall in his blood letting and imaginative slaughter. Sure, he hasn’t got Marshall’s narrative skill or his ability to carve human interest out of even the most basic cardboard characters. But he still manages to present what we see with enough sense of action and adventure. Ridiculous as it might feel that a tiny group of men holds off an entire legion of King John’s troops, you sort of go with it as the film is shot with enough sense of ragged viciousness that you don’t notice the gaps in the tiny budget (less than a single episode of Game of Thrones).

The actors all know they are in something rather silly as well. It’s a bizarre mixture of people, from Hollywood star character actors to B-movie stalwarts to Brit TV stars to slumming classical actors. James Purefoy grounds the stuff with his usual commitment and charisma. Just as well he does as Paul Giamatti clearly rocks up in the spirit of a lark, hammily overacting to such a ludicrous degree that he sounds like John Adams on a bad acid trip. It’s a surprise they don’t turn him on the walls of Rochester Castle and let him chew through the defences. Between these two hardly anyone else gets a look in, although Brian Cox does well as the brave leader of the castle who suffers a particularly brutal death involving mutilation and imaginative use of a catapult.

There are some impressive set pieces and some very stirring bits of head mashing, limb slicing violence but the overall plot is completely bog standard, as if with all that investment they either didn’t have time to put a story together or felt that they needed to make something that would appeal as much as possible to the lowest common denominator in order to recoup the costs. But at least there is a nice sense of growing comradeship between this hardy gang fighting against the odds and the film gets some sense of honour and duty being causes worth dying for against tyrants. I mean, it’s not there in spades, but it’s there.

And if you like this sort of B movie hack and dash stuff you’ll probably actually rather like this. Heck I’ve seen it twice, and I found the second viewing actually rather good fun in particular, especially as I knew going into it the entire film was an absolutely absurd pile of nonsense designed to just let you watch blood spray across the screen and heads depart bodies. Roll with it – put your critical facilities on hold and forget the history – and you will rather enjoy its earnest B movie antics.
Email ThisBlogThis!Share to TwitterShare to FacebookShare to Pinterest
Labels: Aneurin Barnard, Brian Cox, British Films, Charles Dance, Derek Jacobi, James Purefoy, Jason Flemyng, Jonathan English, Kate Mara, Mackenzie Crook, Paul Giamatti