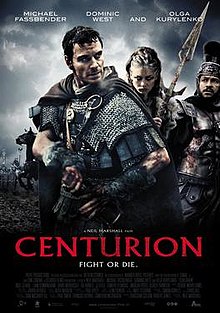 It’s an old fable: the “missing” Roman legion, the 9th Legion that allegedly marched to Scotland around 120 AD. We don’t know what happened (if anything) but it usually gets tied into Hadrian’s decision to build his famous wall. Anyway, Neil Marshall’s film tries to plug the gap, with the Legion eradicated on an ill-judged expedition north to settle affairs there once for all. A “ragtag bunch” of survivors (all of whom match expected character tropes) have to run over hostile countryside, led by surviving senior officer Centurion Quintus Dias (Michael Fassbender) to get back to safety and Roman lines.

It’s a Neil Marshall film, so you can expect blood-letting aplenty and high-octane action on a budget. And you more or less get it, mixed with his love for accelerator-hitting chases and against-the-odds action. It’s entertaining enough, but its main problem is that it feels a little too by-the-numbers, as if all the thought about how to make it original and exciting went straight into the look and style of the film – all drained out colours and serious claret – and none at all into storytelling or character.

You sort of end up caring for the characters in a functional way – largely because they are all such familiar types – but their personalities seem to have been designed entirely around the various deaths that have been invented for them. So the enthusiastic meet unjust ends, the likeable fall to cruel chance, the world-weary give their lives for one more stand, the selfish meet justice. At the end, the characters you would basically expect to stumble to the finish line do. It’s a film that lacks any uniqueness.

In fact, what gives the characters life is the professional character actors playing them, all of whom can do what they are doing here standing on their heads and look like they were largely there with an eye on pleasant after-shooting hours in a series of local pubs. It’s hard otherwise to think what attracted them to these cardboard cut-outs and pretty familiar structure.

Not that there is anything wrong with what Marshall does with his film here – it’s a lot of fun when stuff is happening, it’s just that nothing feels like it carries enough weight or originality to survive in the memory. Everything is fine but nothing is really inspired. There is very little sense of Ancient Rome or any other place. The Romans are basically squaddies, an idea that sounds interesting until you remember turning period warriors into versions of modern soldiers is hardly new, while the Brits chasing them are woad-covered psycho stereotypes.

So while it passes the time, Centurion does nothing special with it. It feels like a wasted opportunity – that with a cast this good and a decent premise, plus a nice little historical mystery to pin it onto in order to give it depth, Marshall could have come up with something that was more than the sum of its parts rather than less. Perhaps it needed more time with its ragtag group so they actually became characters rather than plot devices. Perhaps it needed to take more of a rest from its constant chasing to allow quieter moments of reflection and character. Perhaps it’s just a chase film that is never quite compelling enough to make you overlook these things. Either way, Centurion isn’t an all-conquering empire of  film.
Email ThisBlogThis!Share to TwitterShare to FacebookShare to Pinterest
Labels: British Films, David Morrissey, Dominic West, Imogen Poots, JJ Feild, Liam Cunningham, Michael Fassbender, Neil Marshall, Noel Clarke, Olga Kurylenko, Paul Freeman, Riz Ahmed, Roman films, Ulrich Thomsen