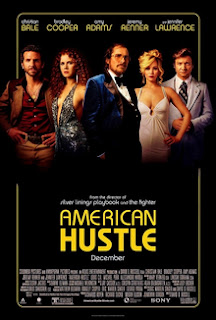 In 2013, American Hustle was nominated for ten Oscars and won none of them. Somehow, being invited to the big party but not receiving any prizes was strangely fitting for a film about small time grifters forced into a big game way beyond their control. Russell’s film is like a celebration of his strengths and weaknesses as a director: it’s stuffed with some very good (if rather mannered) performances, offers lots of dynamic film making, but is still basically a rather cold and arch film that’s hard to really invest in – rather like a con game in itself.

In 1978, Irving Rosenfeld (Christian Bale) is a small-time grafter, running scams with his partner and lover Sydney Prosser (Amy Adams), who uses the identity of a young English aristocrat “Lady Edith Greenslly”. Rosenfeld longs to leave his unstable, selfish wife Rosalyn (Jennifer Lawrence) for Sydney, but fears he will lose all his access to his adopted son. Rosenfeld and Prosser’s career of clever investment frauds is brought to an end when Prosser is caught red-handed by FBI agent Richie DiMaso (Bradley Cooper). DiMaso forces the pair into his entrapment operation, targeting New Jersey politicians with offers of bribes as part of a Fake Sheik investment. Initially it targets Mayor Carmine Polito (Jeremy Renner), but the operation quickly expands, as the ambitious and impulsive DiMaso constantly follows every connection and the operation expands to dangerous levels, taking in the mafia. Scared, Rosenfeld and Prosser desperately try to play both ends against the middle.

American Hustle is a decent film, which pulls together the sort of capers, turmoil and antics that you would expect from a film about a long con. It throws into the melting pot the vibes of several other films, from The Sting to Goodfellas, and asks us to admire the results. Russell encourages the actors to play it with an edgy verisimilitude that pretty much works as a metaphor for con men. Each performance is an effective display of high-wire character acting work laced with arch, studied tricks. But only rarely do you get a sense of something that’s real.

That’s part of a film that wants to have a cake and eat it as well. It’s striking in the entire story that the most sympathetic character is the initial target, Jeremy Renner’s well-meaning, passionate New Jersey politician, bamboozled into taking a bribe (money he mostly uses in the local community) because he is convinced it’s a crucial part of getting Arab investment. It’s even more striking that the most honest, subdued (and deadly) character is the Mafia kingpin Victor Tellegio, played with chilling menace by an unbilled Robert DeNiro. Nearly everyone else on the side of the entrapment operation is pretty much a selfish prick or verging on the unhinged.

But then that’s part of the point of the film, which throws two people who know what they are doing (Rosenfeld and Prosser) at the mercy of people playing with fire (Roselyn and in particular DiMaso, a permed, tightly-wound powderkeg). This is one hell of a performance from Bradley Cooper – and a sign again after Silver Linings Playbook that Russell gets something out of him few other directors can. Cooper is a force of nature, a bundle of terrible impulses combined with an utter lack of shame or self-control, who is quite happy to trample over everyone to get what he wants and has no regard whatsoever for the danger he puts himself and others into. Utterly unpredictable, he never sticks to a plan, veers between rage and hysterical laughter and, worst of all, is always convinced he’s right.

It’s DiMaso who spins the operation into dangerous waters with his vaulting ambition to land yet another big fish, recklessly peddling insubstantial, unprepared lies on top of each other – to the terror and horror of practised peddlar of bullshit Rosenfeld, whose whole successful schtick is based on saying “no” and having the mark do all the desperate work. DiMaso’s approach not only puts the operation at risk, it puts lives at risk – not that DiMaso cares, preoccupied as he is with his childish one-upmanship with his boss and a teenage sexual obsession with Prosser.

What chance do the (mostly) small-fish politicians and local figures have, whose lives are placed on the altar of DiMaso’s ambition? It’s no wonder that, late in the film, our conmen heroes start to feel guilt and remorse – none more so than Irving Rosenfeld. Played by Christian Bale with the sort of tricksy, Olivier-ish disguises that he so loves (in this case increased weight, a balding comb-over and a pair of tinged glasses he obsessively fiddles with), Rosenfeld is an operator happy with the level he is working at and incredibly wary of stepping up into the dangerous big leagues. Justifiably convinced of his own professionalism at fleecing money and winning trust, Rosenfeld has no problem with taking money from the selfish but every problem in the world with destroying the life of a fundamentally honest man. Bale’s performance, for all the tricks, manages to successfully build a picture of a selfish man who believes himself in his way to be honest in a way and is just trying to make his way.

That way also involves balancing between two very different women. Amy Adams does decent work as a blowsy fake-aristocrat, sporting a series of tops with neck lines that literally plunge down to her waist, although she is perhaps a little too “nice girl next door” to really convince as the love-em-to-manipulate-them Prosser. She’s not also helped by the script giving her an ill-defined arc of self-doubt linked to pretending to be someone else. Sweet as the genuine love can be her between her and Rosenfeld – and excellent as her chemistry is between Bale and Cooper – it’s the character who remains the least knowable in the film.

Also not helping is the fact that Jennifer Lawrence burns through the film as Rosalyn, the sort of electric, larger-than-life but still very real performance of arrogance, selfishness, dangerous stupidity and greed that marked her out as a major actress. Whether inadvertently putting Rosenfeld’s life at risk through blabbing details she’s half-overheard and half-understood, cleaning the kitchen while singing an aggressive rendition of Live and Let Die or nearly burning the house down because she won’t believe metal can’t go in “the science oven” (aka microwave), Lawrence is the film’s MVP.

Russell’s film showcases all these actors brilliantly, but his overall story remains a little cold and not as clever as it thinks. With a film about conmen you expect a final rugpull – and this film sort of manages one – but the story telling to take us there isn’t quite as articulate and clever as it needs to be in order to be really satisfying. Perhaps it’s the film’s ragged, hip, indie style of telling – or the air that the actors are making a lot of this stuff up as they go with edgy, semi-improvised performances – but the film never really engrosses or engages. For all that we see the inner worlds of Rosenfeld and Prosser, I can’t say I really, truly cared what happened to them.

Instead Russell focuses on the marshalling of his resources, and cool, slick film-making. He uses expert camera work and editing, mixed with a superbly chosen soundtrack, overlaid with voiceover, sudden transitions, some narrative jumps and a vibrant sense of cool to make a story that finally feels a little too much like a style-over-substance trick – in fact a con game all of its very own, as enjoyable and entertaining as the rest of the film, but when it finishes you realise your pockets are empty.
Email ThisBlogThis!Share to TwitterShare to FacebookShare to Pinterest
Labels: Alessandro Nivola, Amy Adams, Bradley Cooper, Christian Bale, David O. Russell, Jack Huston, Jennifer Lawrence, Jeremy Renner, Louis CK, Michael Peña, Robert De Niro