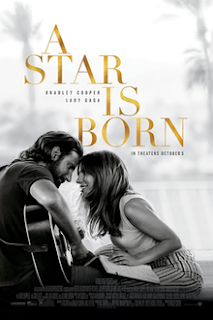 The story of A Star is Born is practically a staple of Hollywood. Bradley Cooper’s film is the fourth version (after 1937, 1954 and 1976) and re-packages the action to the country and western scene. Cooper injects the film with a real seam of emotion and complex, challenging humanity – represented above all by Cooper and Gaga’s searing, heartfelt, beautiful performances.

Jackson Maine (Bradley Cooper) is a famous country singer, and a self-destructive, if charming, alcoholic. One day, by chance, he stumbles into a bar and overhears a performance by Ally (Lady Gaga), a soulful artist rejected on multiple occasions for a record deal because of her slightly unconventional style and looks. Jackson and Ally form a deep connection and he invites her to perform with him. Their bond grows and Jackson is proud as her career starts to flourish. But this rise is matched by his own increasingly damaging alcoholism and drug addiction which puts his health and their happiness at risk.

A Star is Born brilliantly refocuses the story as a beautiful relationship drama. In previous versions, the man slumps into destructive behaviour due to resentment at the female protégé’s increasing success. Here though, Jackson – despite flashes of jealousy – remains supportive and proud of his wife, and she devoted to him. What Cooper has structured here is a story about the damage of depression and alcohol – and how they can shatter and destroy a person regardless of events in their life.

It also means we get a fresh perspective on an otherwise predictable drama. Having Jackson remain proud and supportive – and increasingly guilt-ridden by the impact his behaviour has on Ally – means we can also remain invested in him. Similarly, it’s hard not to share his feeling that Ally loses something of her beautiful soul as her manager crafts her into a manufactured pop icon. It’s the intrusion of the rest of the world into this couple that puts strain on their relationship, not internal tensions.

It’s a film in many ways that starts with a happy ending. The early, romantic meetings are beautifully done, the first performance of Shallow (Ally’s song) on stage plays like the fist-pump ending of any number of Cinderella stories. Her protective attraction matched with his old school chivalry in their early relationship is deeply romantic and shows what could be between them. Cooper sprinkles the film with happy endings – you’ll be begging the film to stop at any number of them – and barely a scene goes by that won’t have you choking back tears or watching through your fingers in pained horror at how badly things can go wrong.

It helps that for both leads this was clearly a deeply personal project. Both produce sensational performances. Cooper has talked about his struggles with both alcoholism and depression – and he brings all this deep rooted pain to bear here. Jackson is, in many ways, a wonderful man – caring, supportive and loving – but struggles with demons he can’t control. Cooper’s fragility, his suffering, his gut wrenching guilt and sadness are played beautifully in a performance that truly comes from the heart, and that leaves you wanting to give him a hug.

Lady Gaga is his match in a performance of tender innocence, of gentle humanity and earnestness. Again you sense the story of an unconventional person, with crippling self doubt, more than speaks to her. Gaga’s emotional bravery and commitment here is extraordinary, and you feel again she is showing in this film something very personal and tender to her. The chemistry between the two actors is electric – it’s rare to see two such performances complement each other so perfectly.

These two actors play off each other beautifully, with scenes that are at times hard to watch in their scarring emotional truth. At the same time, the investment of the audience is absolute in this loving relationship. The film also has some excellent performances in the support, not least from Sam Elliott as Jackson’s frustrated, but fundamentally loving, brother.

A Star is Born shocked me. It’s not the film I was expecting, or the story I anticipated. Instead it’s an entertainment industry parable, a love story, a film about the destructive unpredictability of depression and how sometimes love can’t conquer all. With some graceful direction from Cooper and above all his emotional honesty – and the truth of his and Gaga’s performances – this becomes a film that tugs on the heart strings until heart strings break. Beautifully made and wonderful.
Email ThisBlogThis!Share to TwitterShare to FacebookShare to Pinterest
Labels: Andrew Dice Clay, Bradley Cooper, Dave Chappelle, Lady Gaga, Musicals, Sam Elliott