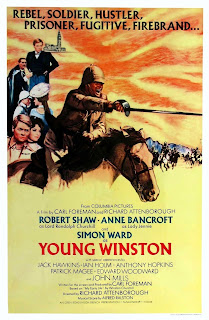 Any poll of the Greatest Briton is bound to throw up, near the top, Winston Spencer Churchill. So famous is he, that his surname isn’t even required for Attenborough’s biography of the Great Man – just that name Winston gives you a pretty good idea of what you’re going to get. And you’d be right, because this film gives you a pretty straightforward rundown of Winston Churchill’s early years, in an episodic breakdown that gives us some small insight into what shaped the chap who went on to implore us to “fight them on the beaches”.

Simon Ward is the Young Winston, with Robert Shaw and Anne Bancroft as his parents Lord and Lady Churchill. Lord Randolph is the high-flying MP who throws away his career, catches syphilis, loses his mind and dies aged 37 – all the time disappointed with the son desperate for his approval. Lady Jennie is his loving, supportive but slightly distant mother. Winston himself? A bright lad, but a hopeless academic, struggles at school, needs umpteen attempts to scrap into Sandhurst for a career as a cavalry officer (a dunce’s career clearly in the opinion of Randolph), serves in the Sudan under Kitchener (John Mills) and starts writing books and newspaper articles – because hopeless academic he might be, he’s still gifted with words. A career in Parliament is his dream – helped no end by his escaping captivity during the Boer War, making him a popular hero.

You can probably tell from that plot summary that this is a somewhat episodic film. Although initially throwing us into a clash in North-West India between the 35th Sikhs regiment and Pashtun rebels – an action during which embedded journalist Churchill wins a mention in dispatches – the film quickly settles into a straight narrative run down of Churchill’s early life, filtered through the great man’s own writings and biography. This makes for an episodic, at times rather dry, box ticking exercise of key moments in his life although it gets enlivened at various moments with some decent scenes and some good performances.

The one fact that comes out most strongly from the film is the wretchedly unhappy childhood of Winston himself. A borderline dunce, Churchill is a hopeless student from an early age. His school days are miserable, dispatched to some ghastly boarding school where thrashings from the headmaster (ironically played by later regular – and definitive – Churchill performer Robert Hardy) are handed out as regularly as dollops of gruel. There is a certain emotional impact throughout these scenes, with extensive quotations from the pre-teen Churchill’s letters barely concealing pleas for his parents to visit him (safe him) under protestations of his happiness at school.

But this emotional connection doesn’t really last once we get into the adventures of the younger Churchill. This is despite an excellent performance from Simon Ward, who perfectly captures the mood and manner of the more famous older man while splicing in plenty of youthful exuberance and naivete. Ward does a terrific job of holding the film together – so well in fact you are left feeling slightly sorry that he never got a part as good as this ever again. His final speech of the film is a perfect capturing of the speech-making prowess of the young statesman.

The film takes a mixed attitude to Churchill’s parents. It’s very open about the syphilis that afflicted Lord Randolph, and even before that makes clear his career is one governed by rashness and poor judgement. Robert Shaw is excellent as Churchill’s father – a stern taskmaster, constantly disappointed in his dullard, lazy son, but spicing it with enough small moments of affection to make you understand why Churchill worshipped this man whom he surpassed by every measurable factor. Shaw also makes a pre-illness Churchill, sharp, witty and strikingly intelligent: making his later descent into illness and unpredictability all the more affecting. Randolph’s final speech in the House – raddled by syphilis he looks awful and can barely remember his train of thought for longer than a few minutes – is remarkably moving.

The film takes far more of a conventional view of Lady Sarah, presenting her far more as the idealised mother figure she must have been for Churchill. Anne Bancroft is saddled with a rather dull part that never really comes to life, as the more interesting aspects of her colourful life are largely left on the cutting room floor.

Attenborough’s film does try to drill down into the personalities of these three people with a curious device where each character has a scene speaking (direct to the camera) to an unseen journalist asking them questions about themselves and the events around them. This interrogational style looks like a rather dated 1970s invention today – look how we put the spotlight on these people! – but it does give a chance to see them from another perspective, and give the all-seeing author of the screenplay (Carl Foreman) a chance to ask questions viewers are probably asking. It’s on the nose, but still kind of works, even if the revelations we get barely seem to give us any shocks.

It’s about the only slight moment of invention anyway in a film that is another example of Attenborough’s excellence at marshalling a huge number of actors and locations into something very reassuringly safe and professional that is going to have a long lifespan on Sunday afternoon TV schedules. Young Winston is a decent, enjoyable mini-epic, but it’s not the film for those really wanting to either understand the times or understand the personalities involved.
Email ThisBlogThis!Share to TwitterShare to FacebookShare to Pinterest
Labels: Anne Bancroft, Anthony Hopkins, Biography, British Films, Edward Woodward, Ian Holm, Jack Hawkins, John Mills, Patrick Magee, Richard Attenborough, Robert Hardy, Robert Shaw, Simon Ward